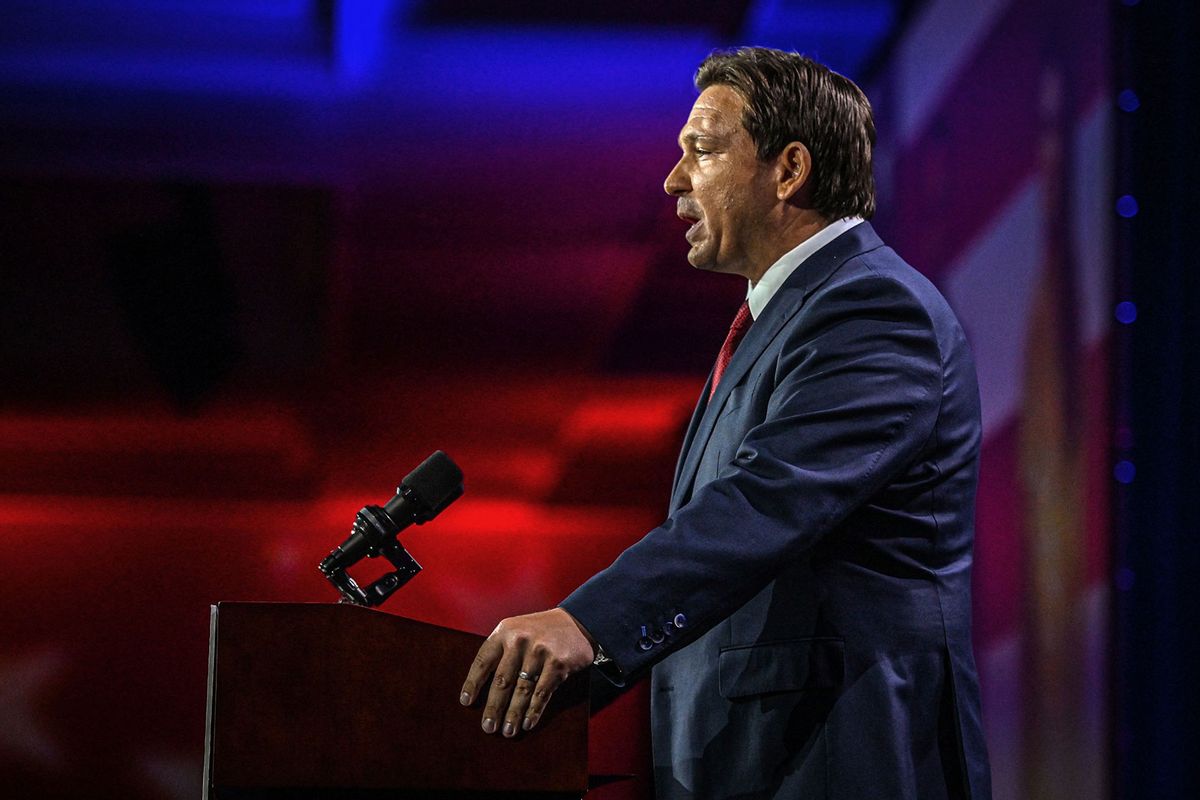 With all the hoopla in Washington since the Republican House majority came to town, it's easy to forget that clown car is only performing in one ring of the GOP circus. Hard as it is to take your eyes off that show, it's also important to pay attention to some of the other acts in state houses around the country — and none is more riveting than what's going on down in the laboratory of anti-democracy known as Florida.

Gov. Ron DeSantis was sworn in for his second term last week in Tallahassee with a two-day extravaganza that guests called "DeSantis-Palooza." It featured an ostentatious outdoor inaugural ceremony on the steps of the Old Capitol preceded by a prayer meeting with 80 to 100 people from the faith community, followed by a "Toast to 1 Million Mamas" hosted by Casey DeSantis at the governor's mansion. Later that night Ron and Casey entered their glittering inaugural ball for 4,000 fans to the strains of the campaign song "Sweet Florida" by Donnie and Johnny Van Zant (former members of Lynyrd Skynyrd and .38 Special), which features these inspirational lyrics:

You can take it to the bank he don't care what Brandon thinks at the White House
Yeah, he's fighting for the right to keep our state free (free)
Well he's taking on the swamp and he's calling out Dr. Fauci (Fauci!)
He's the only one fighting for you and me (you and me)
Yeah, we're free! (Yeah, we're free!)

It must have been a breathtaking moment. The Republican faithful in attendance told reporters they believed they were witnessing the rebirth of John and Jackie Kennedy's Camelot.

DeSantis also gave a stirring inaugural address that will no doubt be remembered as the "Florida is where woke goes to die" speech. He evoked the Declaration of Independence, the Gettysburg Address, the "I Have a Dream" speech and the battle of Normandy, promising to "carry the torch" of freedom and pledging that he will "never surrender to the woke mob." When DeSantis proclaimed that he would always "defend our children against those who seek to rob them of their innocence," the ecstatic crowd clapped for several minutes. It all seems a bit much for state politics but then DeSantis' grandiloquent rhetoric says pretty clearly that he's short term in Tallahassee.

But never say that DeSantis is all talk and no action. He got right to work, appointing culture-war guru Christopher Rufo to the board of New College of Florida, the state's prestigious public liberal arts school, with the stated intention of turning it into a hardcore right-wing institution modeled on Hillsdale College, the Christian school in Michigan that has become hugely influential in conservative intellectual circles. (Salon's Kathryn Joyce published a three-part series on Hillsdale last year.) As Michelle Goldberg of the New York Times writes, this is part of DeSantis' "broader quest to crush any hint of progressivism in public education, a quest he'd likely take national if he ever became president."

In DeSantis' stirring inaugural address, he invoked the Declaration of Independence, the Gettysburg Address and the "I Have a Dream" speech, pledging he would "never surrender to the woke mob."

The crusade against public education has been a hallmark of DeSantis' Florida tenure so far. He pushed through the "Don't Say Gay" bill, which prohibits teachers from speaking about gender identity or sexual orientation through third grade and proscribes any discussion of said issues "in a manner that is not age appropriate or developmentally appropriate" all the way through high school. Educators have no clear idea how to implement such a rigid yet ambiguous restriction on free speech in the classroom.

Teachers aren't the only ones DeSantis seeks to enjoin from speaking about things of which the governor, acting as the state, disapproves. He also wants to prevent businesses from speaking out against his policies, as he tried to do with the Walt Disney Company when it spoke up for its LGBTQ employees. Another bill he signed, the "Stop WOKE Act,"  restricts conversations about race in schools and businesses, granting students and workers the right to sue if they believe a classroom lesson or workplace training course caused them to "feel guilt, anguish, or any other form of psychological distress" due to their race. (It doesn't say that this protection is afforded exclusively to white people, but that's the implication.)

Last November that bill was blocked by a federal judge, who ruled it violated the First Amendment and that DeSantis appears to think that "the State has unfettered authority to muzzle its professors in the name of 'freedom.'" He clearly does think that. Despite the judge's ruling, the law has had its intended effect — untenured professors in Florida colleges are adjusting their curricula.

DeSantis also recently announced that he will form a grand jury to investigate whether the COVID vaccines were a corrupt scheme to enrich Democratic politicians and sicken people with junk science. That comes after he enacted a series of counterproductive laws and regulations during the pandemic that, as the Palm Beach Post reported, "killed more people aged 65 and over in Florida than any other state in the nation ... leaving the far-more populous states of California and Texas eating our dust. " But boy oh boy, did he ever own the libs.

DeSantis' war on trans kids is especially heartbreaking. (He even invited one of the cruelest of transphobic online trolls, the proprietor of Libs of TikTok, to stay in the governor's mansion.) Leaving no transphobic stone un-turned, he's now investigating drag shows

Perhaps most infamous are the execrable stunts using human beings as pawns in DeSantis' unrelenting PR campaign to prove that he's the most odious governor in the United States. His flamboyant arrests of former felons who had been erroneously told they were eligible to vote are being systematically dismissed by the courts, but undoubtedly served their purpose by persuading some people who could legally have voted not to take the chance. That move thrilled DeSantis' core supporters, voters who loved watching former convicts (most of them Black) punished for the crime of voting.

It's worth noting that DeSantis has been unusually cagey about abortion rights, at least compared to most hard-right culture warriors. He has vaguely promised to sign more "pro-life" legislation beyond the 15-week abortion ban already enacted, but has not offered specifics, understanding that it's a perilous issue for a national politician. It will be interesting to watch him try to thread that needle with the zealots in the Florida legislature.

Of course we have to mention DeSantis' despicable plot to lure asylum seekers in Texas, hundreds of miles west of his own state to board planes for Martha's Vineyard, Massachusetts, purely to score crass political points that have nothing to do with Florida, which has no international border. The motives behind that episode are still being unpacked and there is some evidence that taxpayer money was diverted to high-level DeSantis associates. But public corruption is considered a smart move among Republican officials these days, so it's doubtful anything will ever come of it.

Those are just a few examples of what we've seen from Ron DeSantis over the past few years. With the exception of the latest brouhaha over "woke" M&M candies, I don't think there's one culture-war issue that DeSantis hasn't jumped into with both feet. One shudders to contemplate what he may go after next but you can be sure he'll find something. He believes this is his ticket to the Republican presidential nomination, and at least on that front he's way ahead of a certain other Florida resident who's starting to look like yesterday's man.

about the Republican Party in 2023