Getting lung cancer to own the libs: House Republicans want to make smoking great again

Masculinity gets toxic — literally! — with the GOP majority's plans to stink up the halls of Congress with tobacco 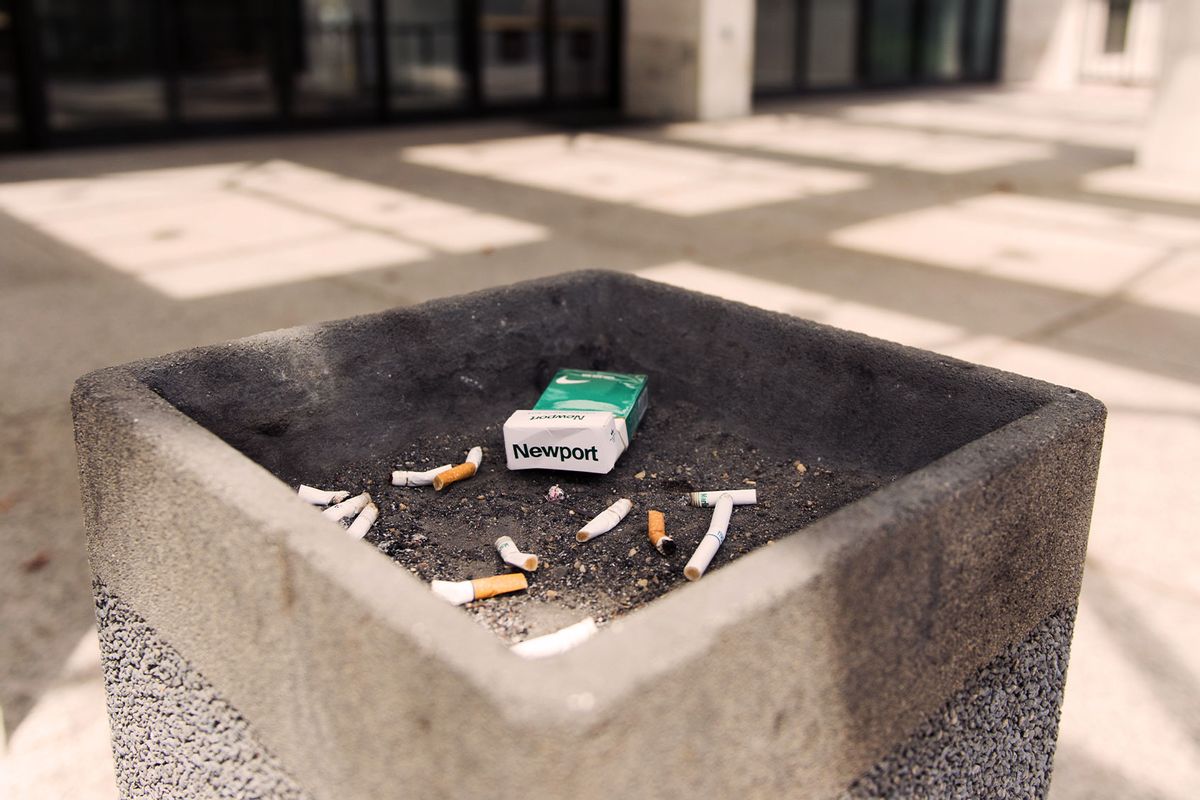 As a member of Generation X, I've found a reliable way to spook Gen Z-ers: stories of the bad old days of my youth, specifically the era of indoor smoking. Some of you will remember this: Homes, cars, restaurants, bars, college classrooms and even high schools pretty much let smokers have their way with the commonly shared air. Those of us who spent our nights in bars and clubs reeked of tobacco smoke all the time, even if we didn't actually smoke. Our hair and our clothes permanently emanated that distinctive sour odor of it. Bans on indoor smoking were controversial at first, but when they finally arrived, it was something like seeing in color for the first time. The world, it turned out, is a lot more pleasant when you can smell things other than the reek of cigarette smoke. Going back to indoor smoking sounds about as much fun as having someone follow you around dragging their fingernails down a chalkboard all day long.

This is so self-evident that most Republicans I know agree personally, despite belonging to a political party whose guiding ethos is to be deliberately unpleasant in hopes of getting a rise out of some liberal somewhere. Even people who think Fox News host Greg Gutfeld is funny have enough sense to know that it sucks to smell like an ashtray sucks. Or at least I thought they did.

I wrote an entire book about Republican trolling, so I'm ashamed to admit that I underestimated how pathetic it can get. With the GOP now in control of the House of Representatives, people are smoking indoors again in the Capitol, or at least the half of it governed by the oh-so-powerful Speaker Kevin McCarthy. Gross! I suppose Republicans can congratulate themselves, since they have successfully triggered me with this news. Of course, if they'd like to, they can trigger me even more — maybe by refusing to take regular showers or to wipe their butts after using the bathroom.

But in fairness, this isn't just about trolling. It's also about a close cousin to trolling, in the constellation of motivations that make right-wingers such baffling and exhausting people: Toxic masculinity. For about as long as supporters basic public health have argued for restrictions on tobacco use, conservatives have acted as if any regulations whatsoever on their foul-smelling phallic symbols literally amounts to prying the penises off their bodies. Before Rush Limbaugh died of lung cancer, the right-wing radio host who coined the term "feminazi" often portrayed smoking as a wholesome, manly activity that liberals wanted to take away from men purely to emasculate them.

"It's true that everybody who smokes dies, but so does everyone who eats carrots," Limbaugh said.

He wasn't the only one. Former Vice President Mike Pence, when he wasn't denouncing the Disney film "Mulan" for teaching girls they could have military careers, also wrote a sneering 2001 op-ed portraying anti-tobacco regulations as "back handed big government disguised in do-gooder health care rhetoric" and making the blatantly false declaration that "smoking doesn't kill."

Years later, members of the Proud Boys filmed themselves smoking inside the U.S. Capitol during the Jan. 6 insurrection, a visual fuck-you to those who prefer not to smell like a bar's trash can. They each got four years in prison, where cigarettes are famously a form of currency, as well as a way to speed up your inevitable demise. But just as House Republicans have made the anti-democratic desires of the Jan. 6 insurrectionists the center of their political vision, this juvenile and offensive gesture of impotent rage at the "nanny state" has gone from the rioters to the offices of members of Congress.

Members of the Proud Boys filmed themselves smoking inside the U.S. Capitol on Jan. 6 insurrection — and once again House Republicans have felt it necessary to emulate juvenile and offensive trolls.

As the Limbaugh and Pence examples show, Republicans have long framed public health measures as a feminizing threat to their snowflake-fragile masculinity. But that rhetoric has gone into overdrive in recent years, as Donald Trump and then the GOP masses made dying of COVID-19 into a marker of partisan identity politics — and almost a noble sacrifice for the cause of so-called freedom. The deep irony of seeing a man behave pathetically while claiming to be "strong" was amply illustrated in Trump's attempt to deny that he nearly died from COVID by dramatically ripping his face mask off on a White House balcony. He definitely believed he looked confident, but that moment was uncomfortably reminiscent of Trump's repeated claims that his stubby fingers tell us nothing about what he's carrying in his pants.

So we've been forced to endure nearly two years of Republicans defending their masculine bona fides by claiming they're not afraid of COVID-19, often by acting very, very afraid of the vaccine. So many manly men running around declaring they will prove their toughness by refusing to get stuck with a little tiny needle! Joe Rogan, current king of the trying-too-hard culture of talk-radio masculinity, has been an avatar of this hilarious un-self-aware paradox of dudes who will thump their chests and claim they're too much man to be felled by a virus, before squealing like babies at the idea of getting the shot.

I don't know that the "good health = small dick" mentality has actually gotten dumber over the years, but man, it sure feels that way when you see Republicans like Sen. John Kennedy of Louisiana complaining about liberals who carry around "Ziploc bags of kale" and pronounce that "kale tastes to me like I'd rather be fat." The gender politics of this stuff are never hard to suss out, as Kennedy also complained about "yoga mats" in that same speech, objects generally associated not just with blue-state exercise routines but also with women.

The crowd that witnessed Kennedy's rant — at a December campaign rally for soon-to-be-defeated Georgia Senate candidate Herschel Walker — ate it up, evidently never asking themselves how lion-hearted a man is if he's terrified of a vegetable. Women have long been subject to stereotypes about being afraid of mice and spiders, which supposedly makes us weak. But somehow the epitome of rugged manhood is to flee at the sight of a leafy green.

Almost nothing is funnier than someone with a massive gulf between the way they perceive themselves and the way they look to other people. I've witnessed decades of Republicans declaring themselves to be John Wayne heroes while acting like petulant kindergartners making faces because Mom told them to eat their broccoli. It never stops being hilarious. But there are real costs when conservatives seek relief from their yawning insecurities by sacrificing public health to partisan loyalty.

Women have long been subject to stereotypes about being afraid of mice and spiders, which supposedly means we're weak. But somehow it's the epitome of rugged manliness to flee at the sight of kale.

As Scientific American reported in July, there's "a growing gap in mortality rates for residents of Republican and Democratic counties across the U.S." Even before vaccine refusal led to huge numbers of Republicans pointlessly dying of COVID, the GOP hostility toward routine public health measures already meant that people in more conservative counties are likelier to die of many other causes, including suicide, heart disease, opioid overdoses and obesity-related illness. Some of this is cultural: Republicans are less likely to get enough exercise, for instance. But a lot of it is also due to policy decisions, such as poor access to health care, lax gun laws and inadequate road maintenance.

As nearly all sensible people understand, perfect health is not a realistic goal for any of us. There are always tradeoffs between the best possible health practices and actually living our lives. People are going to take sexual risks, stay up late, drink alcohol, do drugs, skip workouts and eat fattening food. Most of us have decided that the risks of post-vaccination COVID-19 aren't severe enough to live like shut-ins for the rest of our lives. Despite hysterical right-wing media claims to the contrary, the government is not coming to take away your gas stove. Contrary to right-wing stereotypes that Democrats will deploy secret-police tactics to make us all live like vegetarian monks, progressive health regulations always try to balance improved public health with ordinary people's understandable desire to decide how they want to live their lives.

When I was a teenager, more than a third of young people smoked. Now it's less than 9%, and continuing to fall. High cigarette taxes and prohibitions on smoking in most public and commercial spaces have contributed, but it's much more that people have realized that the temporary high of nicotine isn't even remotely worth it. You're risking agonizing disease and an early death for the payoff of smelling like an old shoe. There are just way too many other good times to be had, with nowhere near the danger. You can have non-procreative sex, take your friends a drag show or read a book, for instance — which as you probably noticed, are all things the modern GOP would like to legislate out of existence. Smoking, by comparison, is just a bummer. Republicans' petty and self-destructive enthusiasm for it is just another reminder that they've become a party devoted to being terrible for its own sake.