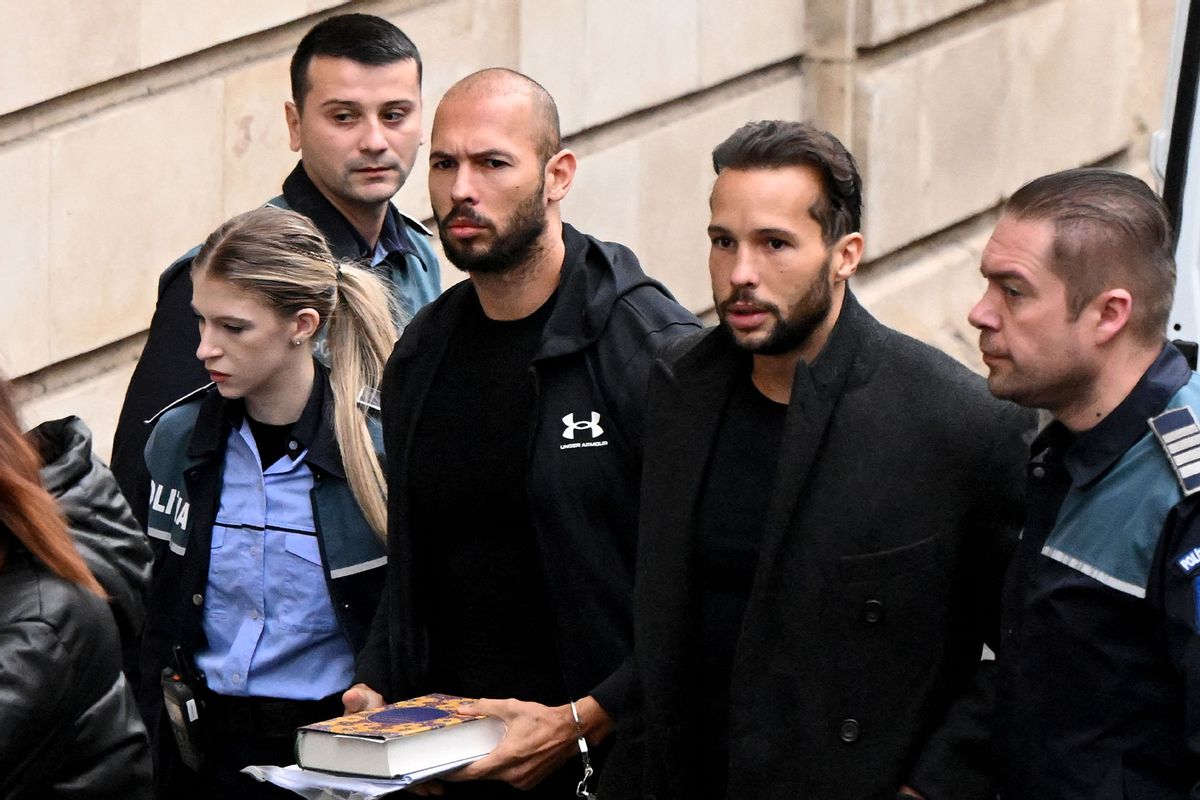 British-US influencer Andrew Tate (3rd R) and his brother Tristan Tate (2nd R) arrive handcuffed and escorted by police at a courthouse in Bucharest on January 10, 2023 for a court hearing on their appeal against pre-trial detention for alleged human trafficking, rape and forming a criminal group. (DANIEL MIHAILESCU/AFP via Getty Images)
--

Despite being charged with human trafficking by officials in Romania, hyper-macho influencer Andrew Tate has continued to reach millions of followers on Twitter and has received support from several right-wing media figures, who suggest he was arrested because he is "effective" and is "going against the system."

The infamous former kickboxer and his brother, Tristan Tate, were arrested in Romania on charges of organized crime, human trafficking and rape last month.

Andrew Tate rose to fame branding himself as a self-help guru, offering his predominantly male fans advice on how to earn money, get with women and escape "the Matrix." His videos have a history of embracing misogynistic and violent messaging and have received thousands of views.

In various videos, Tate can be seen expressing overtly sexist or misogynistic beliefs, including his claim that the "easiest way to judge the value of a female" is based on how many sexual partners she has had and asserting that heterosexual relationships work only when the woman "obeys like she's supposed to."

In other clips, he has made threatening statements against women and described previous encounters with female partners, suggesting that he has choked, struck or otherwise harmed them.

Meta banned Tate from its platforms last year under its "dangerous individuals and organizations" policy after he posted videos in which he described how he would assault a woman if she accused him of cheating.

"Influencers are very good at walking the line so they know what gets banned," said Gianluca Stringhini, a professor at Boston University who studies cybersecurity and online safety. "They know what gets removed, so they rephrase things a different way. … Many of these people who get suspended by Twitter or YouTube, they sort of wear it as a badge of honor so it makes them more trustworthy, to some extent, to someone who is a free speech absolutist."

Following his broad de-platforming in August 2022, Tate was recruited to join Rumble, a site that brands itself as a free-speech alternative to YouTube. The right-wing video-sharing platform has received financial backing from far-right investor Peter Thiel and newly-elected Sen. J.D. Vance, R-Ohio, and has offered to host controversial figures who have been banned from other platforms, according to Media Matters.

After he was banned from Facebook and Instagram, the platform tweeted, "Rumble is ready for Andrew Tate. We do not take part in shutting down opinions."

"We are going to do whatever it takes to hold the line for free speech, whether we agree or disagree with what's said," tweeted Rumble CEO Chris Pavlovski.

In another tweet, Rumble celebrated Tate joining the platform, proclaiming: "I guess Andrew Tate wasn't joking when he said 'this is just the beginning of a mass exodus (to Rumble)' We are #10 and rising fast (and we don't even deep link yet)."

However, influencers like Tate face distinct challenges as they move to more extreme and more polarized platforms, Stringhini explained. Their audience becomes smaller and their content only reaches individuals whose beliefs already align with theirs, which reduces the shock value and the impact on mainstream culture, but also means these users are also more likely to act upon what is being conveyed to them.

After news broke out about Tate's arrest, prominent right-wing figures like Alex Jones of the conspiracy-theory platform Infowars came to his defense, suggesting that the charges brought against Tate were "completely, absolutely, totally made up."

"Tate is well known for being neurotic about not breaking the law, about being neurotic about knowing when they're trying to set him up," Jones said. "And it's well known that when people try to start fights with him and stuff, you know what Andrew Tate does? He walks away. And so, I know his M.O. — he was not trafficking women and all this crap."

While the charges against Tate remain unproven, he clearly has a history of violence. In 2016, he was removed from the reality TV show "Big Brother" after a video surfaced of him hitting a woman with a belt. In another video, Tate is seen telling a woman to count the bruises he apparently caused on her body.

Tate's supporters, however, have continued to back him and make excuses for his behavior. Right-wing talk host Dave Rubin jumped to Tate's defense, implying that his arrest was somehow connected to his Twitter beef with climate activist Greta Thunberg.

Right-wing talk host Dave Rubin appears to believe that Tate may have been arrested in Romania because of his Twitter beef with climate activist Greta Thunberg.

"OK, so I'm just piecing something together here," said Rubin, "but it does strike me as a little odd that this guy who has become an internet sensation gets into a fight with the protected child of the climate movement, and then literally two days later, he is arrested in Romania."

It's no surprise that several prominent figures in right-wing media have defended Tate after his arrest. He has been massively popular with their audiences for years, despite his documented history of violence and aggressive behavior towards women.

In 2015, Tate was arrested over a rape allegation in the U.K., following a complaint from a woman who supplied police with messages sent by Tate in which he wrote "I love raping you," Vice reported.

Fox News host Tucker Carlson invited Tate on his show last year and asked his primetime audience if they thought Tate was a worse influence on the youth than rapper Cardi B, who has supported a variety of progressive candidates and causes.

In another interview with Tate, Lucas Nolan of Breitbart suggested that social media companies had banned him due to "outcry over his pro-masculinity message," rather than his overtly misogynistic posts, and claimed that other right-wing influencers like Alex Jones have faced "mass blacklisting" and have been "removed from the mainstream internet overnight."

"Banning [Tate] is important, but it doesn't necessarily totally dismantle his influence," said Daniel Kelley, director of strategy and operations at the Anti-Defamation League's Center for Technology and Society. "I think if a platform is paying more attention to the rise of various actors, and is thinking more holistically about how to address harassment and the ways in which hate manifests on the platform, it will be able to nip these kinds of sort of hateful influences in the bud."

But when someone like Tate already has millions of followers, and his content is being spread even more widely by other popular influencers with large followings, it becomes harder to remove what's being shared, Kelley added.

One of the most challenging issues in content moderation today is that platforms are primarily focused on individual pieces of content that violate their policy and on deciding what is considered harassment and what is not, instead of looking at how people are behaving more holistically across the web, Kelley said.

Another key issue is that platforms are failing to take responsibility in limiting extremism from spreading unless and until public pressure is applied, Kelley said.

"We saw that a few years ago when we ran the Stop Hate for Profit campaign against Facebook," he said. "We got advertisers to say, 'We're gonna stop advertising on your platform,' and Facebook made changes they hadn't made in a decade."

on social media and masculinity