In her journal archives, Rice describes looking out at the surroundings that the series tries to recreate 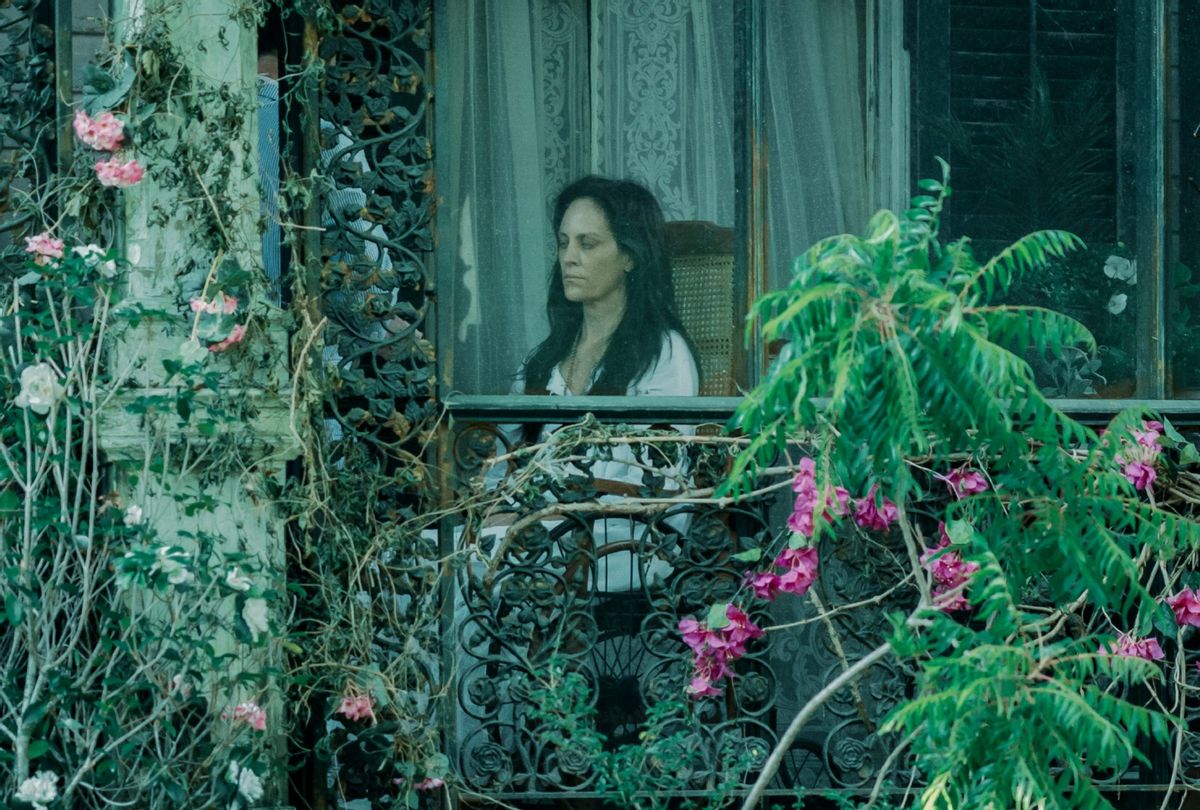 In "Anne Rice's Mayfair Witches" — AMC's second adaptation of Rice's work after acquiring the filming rights to her "The Vampire Chronicles" and "The Lives of the Mayfair Witches" series shortly before her death — many of the main characters live beyond the standard rules of humanity, and one main character is not a human at all. No, not Lasher (Jack Huston). I'm referring to the Mayfair house itself.

In Rice's 1990 novel "The Witching Hour," the first of the series this latest adaptation is based on, we're introduced to the character Deirdre Mayfair, played by Annabeth Gish in the show. Held in a near catatonic state in an effort to keep her from Lasher, the entity tied to her family name for generations, Deirdre sits stoic on the balcony of the Mayfair residence, aging along with the beautiful mansion in the Garden District of New Orleans inspired by the very home that Rice herself lived in for 15 years.

In the second episode of "Mayfair Witches," titled "The Dark Place," Dr. Rowan Fielding (Alexandra Daddario) seeks out this house after the death of her adopted mother Elena (Erica Gimpel) unfolds a personal backstory that makes her ability to kill people with her mind a little less confounding. Jumping on a flight to New Orleans, a place she believes to be visiting for the first time although, unbeknownst to her, she was actually born there, she learns that the Mayfair house is associated with witches, but what she doesn't know yet is that she is one of them.

Although "Anne Rice's Mayfair Witches" was not able to film in the actual house Rice describes in her books – where she lived with her husband, poet Stan Rice and son, writer Christopher Rice – the production filmed a good portion of it nearby at the Soria-Creel House, an 1875 mansion with a similar exterior. And when not filming at that location, they pulled off a lot of the shots using a set shared with AMC's "Interview with the Vampire" production that came before it.

During a panel for the Television Critics Association prior to the premiere of "Mayfair Witches," creator Esta Spalding and Executive Producer Mark Johnson revealed that they had to paint over the wallpaper in one of their shots as it was visibly the same as what was used in interior shots for "Interview."

"We're really using each other's spaces physically, but we're trying to, in the first season of this show, have only these very, very selective Easter eggs for the audience to pick up on," Spalding said.

While AMC did its best to re-create what Rice saw in her mind as she wrote her Mayfair series, her former home has a life of its own.

While AMC did its best to re-create what Rice saw in her mind as she wrote her Mayfair series, her former home has a life of its own.

In a 2014 Facebook post, Rice writes about the house saying, "When I wrote 'The Witching Hour,' I made the house I was living in, in the Garden District of New Orleans, on the corner of Chestnut and First Street, into the home of the Mayfair family of witches. I lived in this spectacular house for 15 years, and it figured in a total of five novels . . . I no longer live there, but will always walk those rooms in my dreams, and the house shall live in my heart forever."

In a special exhibit at Tulane University in New Orleans, situated directly across from the reading room that houses the archives of her journals and manuscripts, a photo and text display of Rice's house at 1239 First Street tells its story.

"The Rice home on First Street became a place of pilgrimage where fans were often greeted by her dog, Mojo," a section of the display reads. It goes on to call attention to the iron fencing around the home, an example of "an early form of chain link." The craftsmanship of this fencing contains beautiful rosettes, leading the home to often be referred to as "Rosegate."

As the exhibit at Tulane points out in another display, the first sentence of "The Witching Hour" mentions this house, and it's a central figure through her Mayfair works.

While writing this book, which had an early working title of "Witches' Fire," according to her journals, she only had to look out the window to get further inspiration.

In an entry dated June 11, 1992, Rice paints the picture of an average day spent working on her Mayfair books in the very home they're partially set in writing, "Thunder and a dark sky. I'm in the black rocker on the front porch. Just thought I'd stop here on my way upstairs. It's thundering away. Rain is slapping all of my broad leaf plants. It's beautiful. All the trees — from the great oaks through the little bushes — are blooming."

In an earlier journal, Rice looks back at one of the first times she saw the house, a situation that her character Rowan is about to experience in the series.

In an entry from that journal dated July 17, 1989, Rice writes "It's lovely over here. Can I think back to that November day when I stood out there looking at this house? Suppose someone had said 'next summer you'll be in the kitchen and everything will be new and shiny and fine.'"

In a 2004 feature, the Orlando Sentinel described Rice's emotional state as she prepared to leave her last home in New Orleans prior to relocating to California after the death of her husband in 2002:

"To this day, she refuses to set foot on the third floor of her house, which was used as Stan's studio. Anyone wandering upstairs would see things exactly as he left them. An unfinished self-portrait he started leans against one wall. His last coffee cups are on a stool. A plastic Barnes & Noble bag with Anne's likeness on it is tacked to the wall, because he thought the image captured her face nicely. On the opposite wall is a small sign reading, 'Seize the Carp.'

Although Rice lived in California at the time of her death, she will forever be associated with New Orleans, and her home on First Street will always be tied to the Mayfair Witches.

On October 30, 2022, there was a second line for Rice in honor of her passing that circled past her house and paused for a moment of silence.

Watch the full second line below.