We need Martin Luther King Jr.'s lessons in resistance — that's why the right wants to erase them

Right-wingers want to refashion Martin Luther King Jr. in their own image — because the truth is still dangerous 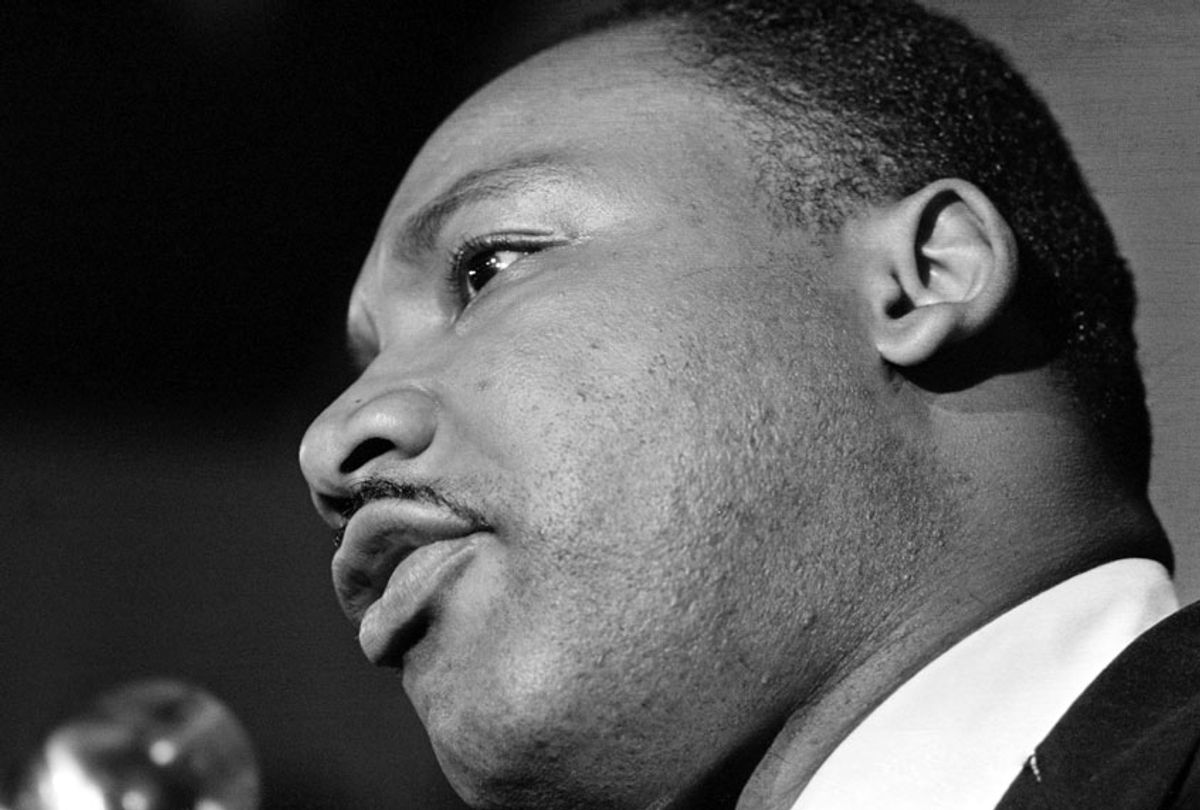 Just over two years ago, Donald Trump and his supporters attempted a violent coup against multiracial democracy. In its place, they wanted to create a new version of apartheid in which the votes and "rights" of white people — specifically, white people like them — would be elevated over those of Black and brown Americans.

We honor Dr. Martin Luther King Jr.'s life and legacy this year 10 days after that second anniversary. In my mind those two dates — the Jan. 6 insurrection and the MLK Day holiday are tied together, as with like an old ominous chain or rope found wrapped around a footlocker or safe that was thrown into a bayou years ago.

Dr. King and the other soldiers in the Black Freedom Struggle fought, sacrificed and died to protect the human and civil rights of Black Americans — and in fact of all people on both sides of the color line. In effect, they fought to create the kind of humane and democratic society that today's Republican Party and the larger neofascist movement and white right want to destroy.

Dr. King understood that all Americans are connected to one another across lines of race, class and other divides. As a moral philosopher and thinker, he saw that white Americans were trapped in a self-imposed prison of white supremacy that limited their humanity and their capacity for love and dignity. This illness does not merely hurt white people but all others who subscribe to the dogmas of whiteness and its poisonous psychological and material wages.

Unfortunately, more than five decades after Dr. King's assassination and the height of the civil rights movement, many white people still refuse to free themselves from that prison, as the Age of Trump and white backlash have made clear.

It's important to remember that the real Martin Luther King Jr., the radical truth-teller rather than the magical hero invented by white America's mythmaking machine, was a highly unpopular figure at the time of his assassination in 1968. Here is Michael Harriot in the Root:

There once was a man named Martin Luther King Jr. who actually lived and breathed. He was a radical who believed in the redistribution of wealth, argued for slave reparations and that wrote that moderate whites who didn't speak out on racism were just as bad as the Ku Klux Klan. Seventy-five percent of Americans disapproved of that man when he was killed by a white supremacist in 1968.

Then, there is the Martin Luther King Jr. that exists in the collective white memory. Through a complex combination of whitewashing, self-guilt and the intentional rewriting of history that absolves them of their hatred, they have painted a sanitized, impressionist portrait of a civil rights icon whose dreams were fulfilled by America's unwavering commitment to justice and equality.

Out of whole cloth, they managed to fabricate a fantastic hologram of King that is ahistorical, but still "based on a true story." Their Martin was a lover, not a fighter. They remember a socially conservative, respectable reconciler; not an anti-establishment revolutionary. And, for their sake, his doctrine of nonviolent resistance was eventually reduced to simple "nonviolence."

Here is what the real-world Dr. King said about white people and racism:

Whites, it must frankly be said, are not putting in a similar mass effort to reeducate themselves out of their racial ignorance. It is an aspect of their sense of superiority that the white people of America believe they have so little to learn. The reality of substantial investment to assist Negroes into the twentieth century, adjusting to Negro neighbors and genuine school integration, is still a nightmare for all too many white Americans. … These are the deepest causes for contemporary abrasions between the races. Loose and easy language about equality, resonant resolutions about brotherhood fall pleasantly on the ear, but for the Negro there is a credibility gap he cannot overlook. He remembers that with each modest advance the white population promptly raises the argument that the Negro has come far enough. Each step forward accents an ever-present tendency to backlash.

Many white people, King suggested in a sermon, were fundamentally narcissistic, "concerned only about the length of life, their preferred economic positions, their political power, their so-called way of life." If white people had the courage and wisdom to "rise up," he suggested, and add "the other-regarding dimension to the self-regarding dimension, we would be able to solve all of the problems in our nation today."

Accounts of the mythical Dr. King often neglect to mention his critique of America's culture of violence and his staunch opposition to the Vietnam War. When he counseled angry young Black men in American cities to avoid violence, some of them responded by asking, "What about Vietnam?":

They ask if our own nation wasn't using massive doses of violence to solve its problems, to bring about the changes it wanted. Their questions hit home, and I knew that I could never again raise my voice against the violence of the oppressed in the ghettos without having first spoken clearly to the greatest purveyor of violence in the world today — my own government....

For those who ask the question, "Aren't you a civil rights leader?" and thereby mean to exclude me from the movement for peace, I have this further answer. In 1957 when a group of us formed the Southern Christian Leadership Conference, we chose as our motto: "To save the soul of America." We were convinced that we could not limit our vision to certain rights for black people, but instead affirmed the conviction that America would never be free or saved from itself until the descendants of its slaves were loosed completely from the shackles they still wear....

Furthermore, although King avoided the contentious term "socialism," there is no mistaking his language about social inequality and systemic injustice: "The evils of capitalism are as real as the evils of militarism and racism. The problems of racial injustice and economic injustice cannot be solved without a radical redistribution of political and economic power.

King did not believe America could be redeemed until all Americans recognized that it was "still a racist country." His withering remarks on the behavior of "white moderates" are justly famous:

I must confess that over the past few years I have been gravely disappointed with the white moderate. I have almost reached the regrettable conclusion that the Negro's great stumbling block in his stride toward freedom is not the White Citizens Counciler or the Ku Klux Klanner, but the white moderate, who is more devoted to "order" than to justice; who prefers a negative peace which is the absence of tension to a positive peace which is the presence of justice.

In numerous states and school districts governed by Republicans, attempting to teach the real history of the color line in America is becoming a thought crime. Republican governors, legislators and school board members are advancing a project that involves banning books, harassing librarians and teachers, forbidding certain classes and lesson materials, defunding entire programs on the college and university level, firing educators for the "crime" of being "woke" and other symptoms of white racial paranoiac thinking.

The ultimate goal is to undermine or destroy public education as we now know it and install a nationwide system of "patriotic" education that is de facto white supremacist and objectively false, aimed at creating an ignorant public largely incapable of being responsible citizens and participants in democracy.

In this new American dystopia the real history of Dr. King and the Black Freedom Struggle may be erased outright. Even worse, King's story and his legacy will be twisted into right-wing propaganda, in which King was a conservative who would have opposed Black Lives Matter protests and supported Donald Trump.

In the shadow of the ongoing coup attempt against American democracy, it's important to remember that the real-world King was also a democratic theorist. Like other civil rights leaders and Black folks more generally, he understood both from academic study and personal experience that the Jim and Jane Crow regime and white supremacy were America's native form of fascism and authoritarianism. That basic truth remains elusive for much of the white commentariat and pundit class, who have just discovered Umberto Eco and dabbled in some other works on European fascism.

Fascists and other authoritarians seek to crush a people's capacity to imagine their freedom and agency, in order to maintain control over them. In distorting the history of the civil rights movement and turning it to their own purposes, the Republican fascists are attempting to erase one of the most powerful and instructive examples in recent world history of how an oppressed people can fight back and defeat their oppressors.

In a recent conversation on my podcast, Thomas Ricks, author of the important new book "Waging the Good War: A Military History of The Civil Rights Movement, 1954-1968," argued that Dr. King and the other nonviolent freedom fighters of the civil rights movement "are as important to American history as Civil War generals. They should be known like Civil War generals' names are known. Their names should be on military bases. Their faces should be on postage stamps":

These people are my candidates for a Great Generation. They are every bit as important to America as the generation that fought and won World War II.... These are people who made America a better place and moved it toward being more of a genuine democracy.

The Republican fascists and their allies do not want these names or true stories to be known. The civil rights movement embodied the type of energy, planning, vision, moral courage, intelligence and dignity that the American people will need to continue a long struggle to defend, improve and expand democracy and to defeat fascism. This work will be measured in decades, not weeks or months. Dr. King famously counseled that "We shall overcome because the arc of the moral universe is long, but it bends toward justice." He did not say that work would be easy or brief, or that it would not come at great cost. His martyrdom on behalf of a movement to build genuine multiracial democracy stands as proof of that.

about MLK, Republicans and democracy