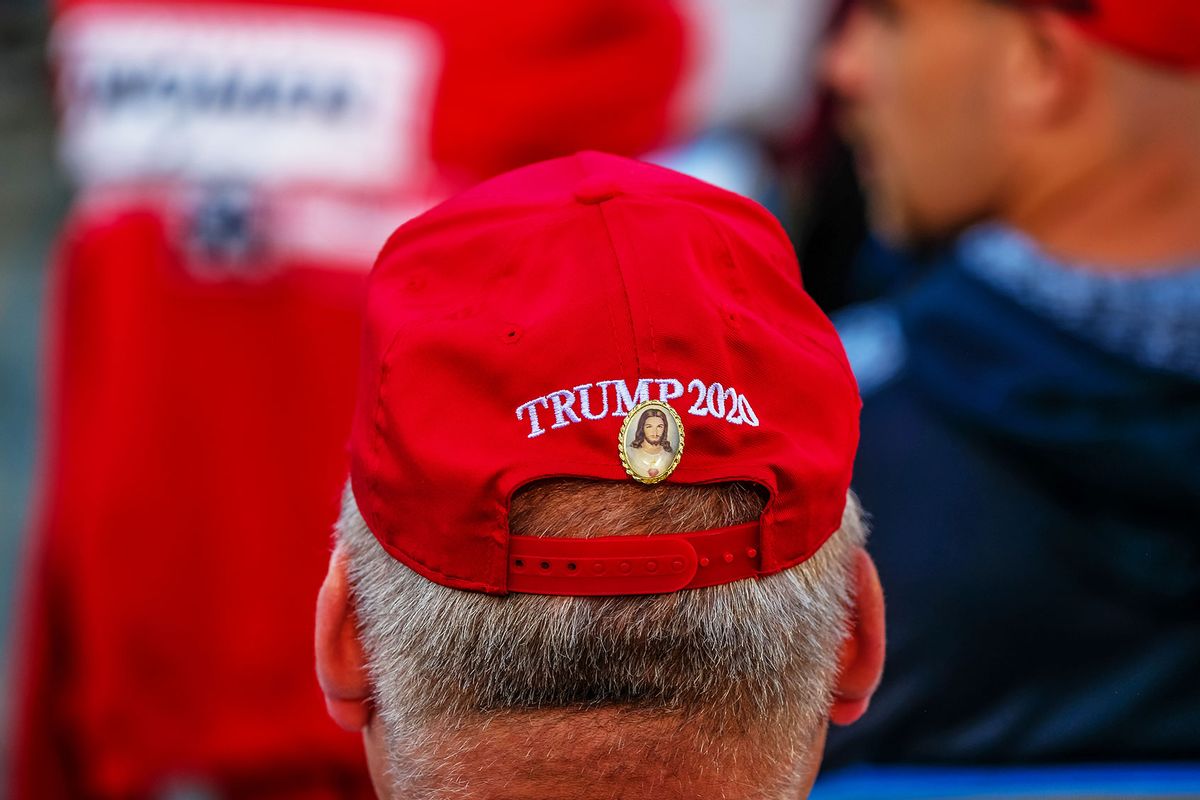 A man has a Jesus Christ pin affixed to a Trump 2020 hat during a Make American Great Again rally. (Preston Ehrler/SOPA Images/LightRocket via Getty Images)
--

There was a time in American life when it was considered bad manners to talk about politics or religion at the dinner table. There were good reasons for that — those subjects tend to get people upset and angry and that's always rough on digestion. But I doubt it was ever something that was practiced much because when people aren't gossiping or talking about work, politics and religion are the most likely topics whether we like it or not. Still, I don't think the merging of religion into partisan politics has ever been quite as thorough as it's been in the past 40 years or so. Sure you can go back in history and see many examples of religious leaders being politically influential from Cotton Mather to Brigham Young to Martin Luther King Jr. And various religious movements have been deeply involved in social reforms forever. But the emergence of the Christian Right under the auspices of organizations like the Moral Majority led by the Reverend Jerry Fallwell and Pat Robertson's Christian Coalition was explicitly formed as a faction of the Republican Party for the purpose of electing officials who would carry out their political agenda. That was unusual and it has been wildly successful.

Ironically, the first evangelical president was a Democrat. Jimmy Carter wore his religion on his sleeve – not that it did him any good with the burgeoning conservative evangelical political movement. In 1980, when Carter ran for re-election, two-thirds of white evangelicals voted for the twice-married, un-churched, matinee idol, Ronald Reagan. It was clear even then that the Christian Right was very serious about enshrining their socially conservative beliefs into law and they weren't picky about how they got it done. Until then religion had operated more or less outside the ugly sausage-making of politics and government, then the Christian Right dove in head first. That movement became one of the most, if not the most, dominant political movements of our time. It completely co-opted the GOP, forcing their agenda as a requirement for office and ensuring that their demands cannot be ignored. In a few decades, they managed to get a religious right majority seated on the Supreme Court and even have an active lobbying effort to sway the justices.

The radical right's takeover of the Supreme Court is complete

Throughout this era, the Democrats spent massive amounts of money and energy trying to win this group over to their side under the belief that since they adhere to the teachings of Jesus Christ that they must see the altruistic ethos of progressivism as a strong component of their beliefs. But for forty years they have been rudely rebuffed, just as Jimmy Carter was.

For quite some time there was what I like to call a Religion Industrial Complex whose mission was to scold Democrats for that failure and advise them that all they needed to do was adopt social conservatism and they would win every election. They didn't say it that way, of course. They talked about "outreach" a lot and advised that their politicians should seek "common ground." And abortion was always at the center of it. Back in 2004 columnist Melinda Henneberger wrote:

"The Democrats are likely to lose the Catholic vote in November—and John Kerry could well lose the election as a result. It's about abortion, stupid. And 'choice,' make no mistake, is killing the Democratic Party."

Actually, the Christian right is killing religion in America, bleeding it slowly for quite some time although few seemed to notice.

As FiveThirtyEight pointed out a few years back, during this period of conservative Christian dominance the country has been growing much less religious and studies have found that this is mainly a result of public distaste for the GOP's merging of religious social conservatism with politics. And nothing has exposed the moral bankruptcy of the Christian Right more than its ecstatic embrace of the lying libertine Donald Trump. They have been among his most fervent admirers, accounting for the single largest bloc of support in the GOP. But a survey of 1,000 US adults conducted back in 2021 found that half of Americans believe evangelical leaders' support of Trump hurt the church's credibility and 25% say that the church's embrace of Trump soured them on participating in religion. They may have won some battles but they're losing the war.

The New York Times reported this week that some conservative evangelical leaders were starting to hedge on supporting Trump in 2024. Big-time Trump supporter Pastor Robert Jeffress appeared publicly with former Vice President Mike Pence last week, prompting Trump to go on the attack. He appeared with commentator David Brody on the Christian Broadcasting Network and said that such behavior is disloyal after all he's done for them. And he blamed them for the GOP's 2022 midterm losses, suggesting that once they got what they wanted they didn't bother to turn out.

Nothing has exposed the moral bankruptcy of the Christian Right more than its ecstatic embrace of the lying libertine Donald Trump.

This was not well received by some of the leaders who clearly think that they can do better with a new face like Florida Gov. Ron DeSantis or maybe former Secretary of State Mike Pompeo. Ohio evangelical activist Bob Vander Plaats complained, "you're not going to gain any traction by throwing the most loyal base under the bus and shifting blame." The one Christian Right leader the Times quoted agreeing with Trump is the experienced, longtime political operative, Ralph Reed, founder of the Faith and Freedom Coalition, who thinks Trump is right that the Republicans didn't go on offense and attack the Democrats as abortion extremists — and that until they do, they'll be in trouble on that issue and in trouble at the ballot box.

It's not just Trump: Midterms show the religious right is an albatross around the GOP's neck

I won't be surprised if they all end up back in the fold one way or the other. The Times notes that after Trump slammed Jeffers for meeting with Pence, the Pastor went out of his way to smooth those ruffled orange feathers. He explained that while he previously indicated that he would remain neutral, it was only because Trump had not asked for his endorsement which he anticipated he would give because he "is most likely going to be the 2024 nominee." He knows his flock and realized that they would not like anyone dissing their favorite president.

But that won't stop the rest of what is shaping up to be a crowded GOP primary field from trying to pry them out of his clutches. They will all go out of their way to make the one pitch that gets them out to the polls: they must confirm that conservative Christians are under siege from everyone else in the country, all of whom are trying to destroy everything they care about. Republicans for the last 40 years have basically run on that message and Religious Right voters voted in lockstep with their leaders all that time. But nobody did it quite like Trump. He spoke their language of grievance and resentment in ways that sent a tingle up their legs and they fell in love. There is no evidence they're ready to abandon him for a boring mainstream politician. They finally got what they wanted: a bad boy.