The radical right's takeover of the Supreme Court is complete

With their ruling against Biden's vaccine mandate, the conservative majority made clear that the law is political 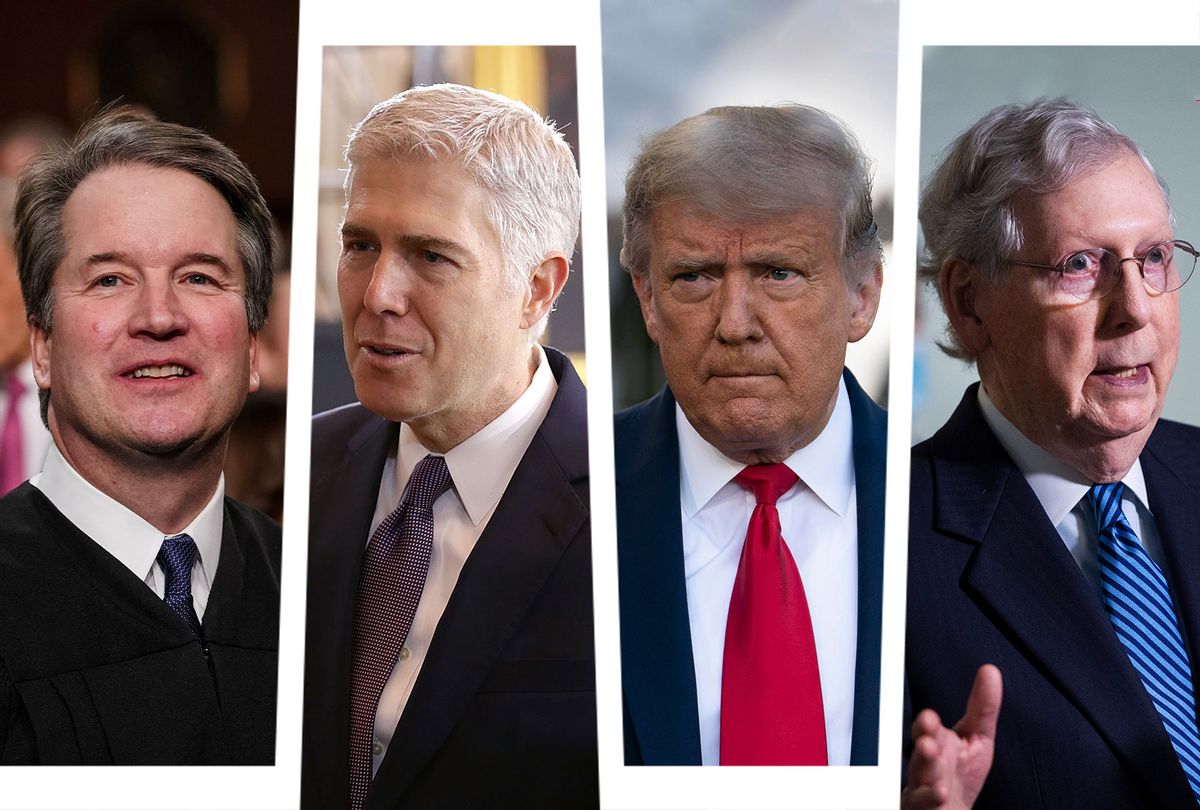 It's very hard to fathom why the right seems so determined to prolong the deadly COVID-19 pandemic but it's obvious that they are. From politicians banning mask requirements to media celebrities pushing disinformation about vaccines, there is no escaping the fact that Republicans and their allies simply do not care that more than 850,000 thousand Americans are dead in less than two years from this scourge and that hundreds of thousands of them are still dying because they refuse to take life-saving vaccines. That the majority of them are their own constituents who have died because they believe right-wing conspiracy theories is just mind-boggling, but apparently they are convinced that this is good for them politically and gives them great ratings.

I guess I was hoping against all evidence to the contrary that there was some corner of the former conservative world that was above exploiting a global health catastrophe for their own gain but that was a silly illusion. Not even the Supreme Court could set aside their partisan and ideological goals in the face of a calamitous crisis. Yesterday they joined the anti-vax fanatics of Fox News and Info-Wars and blocked the implementation of the Biden administration's "vax or test" requirements for large businesses. If they could bend the rules just a little bit further the majority no doubt would have joined Tucker Carlson last night for a celebration.

The court did manage to scrape up a majority with the three liberals plus Chief Justice John Roberts and Justice Brett Kavanaugh to decline to block the mandate for health care workers — although the fact that four justices voted to block that as well is stunning. Remember, however, that there are still cases in the pipeline about that mandate so I'd guess the conservatives still hope they will be able to convince Kavanaugh or Roberts to join them on the dark side down the road. For now, the federal government has the right to mandate that institutions that serve Medicare and Medicaid patients require their employees to not willfully spread a deadly virus to their patients for no good reason. A rare moment of sanity.

Early reports suggest that the big businesses that were to be affected by the mandate are divided on the issue. Some, like United Airlines, which imposed its own mandate, reported that they have 99% compliance and are happy with the results. Others are planning to scrap their plans now that the federal mandate is gone. And if anyone was under the illusion that this was about freedom or markets or small government, ideas that used to be the backbone of conservative thought, some red states have imposed bans on private employers requiring vaccines. So without the federal mandate, even employers who would like to protect their workforce and their customers are going to be forced to allow unvaccinated employees to get sick, transmit the virus and make them bear the costs. Apparently, the Supreme Court agrees that this makes sense, which is terrifying.

The majority opinion rested on the idea that the Occupational Safety and Health Administration (OSHA) exceeded its authority because COVID is not specific to the workplace. They say that because people can also get it elsewhere an agency that is tasked with ensuring workplace safety has no business making this rule. I would just point out that this reasoning is going to come as quite a surprise to the people who have been working from home for the past year and a half, along with school employees, frontline workers and basically anyone who works for a living.

It's absurd. Nothing has been more disrupted by the pandemic than work — you know, that place where people gather inside buildings to spend at least 8 hours with other people breathing all over the place? Of course COVID is being spread at work, probably more than anywhere else. This rationale makes no sense at all. People can get poisoned by asbestos at places other than the workplace but employers are still required to ensure that they can't get it at work. The dissent by the three sane justices made clear how ludicrous the majority's decision was:

"Underlying everything else in this dispute is a single, simple question: Who decides how much protection, and of what kind, American workers need from Covid-19? An agency with expertise in workplace health and safety, acting as Congress and the president authorized? Or a court, lacking any knowledge of how to safeguard workplaces, and insulated from responsibility for any damage it causes?"

What is remains unstated but has been really illuminated in all this is the larger agenda of this Supreme Court. As law professor Kim Wehle explained in this piece for The Atlantic, this ruling is the first salvo in the conservative court's crusade to dismantle the administrative state:

"If Congress is hindered in its ability to employ agencies to fill in the details of its broad mandates, life in the United States could change dramatically. Agencies make rules and regulations affecting stock markets, consumer-product safety, the use and trafficking of firearms, environmental protection, workplace discrimination, agriculture, aviation, radio and television communications, financial institutions, federal elections, natural gas and electricity, the construction and maintenance of highways, imports and exports, human and veterinary drugs, and even the licensing and inspection of nuclear-power plants."

That is the goal. It's grotesque that they would exploit a deadly disease that's killing thousands of people every day to advance it, but they have a mission and nothing will stand in their way. In fact, there's a whole school of thought devoted to the idea that not only is it unconstitutional for the federal agencies to enact regulations, but Congress also has no authority to delegate that task to them in the first place. In this view, public health and safety is solely a state function.

If you are not one to follow the dark machinations of the right-wing legal community, and who can blame you, this idea may nonetheless sound familiar because you've heard it from some other less exalted sources. Recall that none other than Steve Bannon has been blathering on about the "deconstruction of the administrative state" ever since he came to national prominence. Recently, he's been telling people that he's training 4,000 "shock troops" who will be ready on day one when Donald Trump is restored to the presidency to take over all the federal agencies to clean out the bureaucracies and take a wrecking ball to government regulations.

The goal of destroying the government regulatory apparatus that makes America a first-world country is shared by Republicans from Bannon to Utah Sen. Mitt Romney to Wyoming Rep. Liz Cheney to Chief Justice John Roberts and every conservative in between. And it's one of the most radical agendas any political faction has ever advanced. If you want to know why all the Republicans backed Donald Trump even when they knew he was monumentally unfit, this was it. They got their court and their dream is about to come true. Unfortunately, it's a nightmare for the rest of us.

RELATED: How Trump's chaotic incompetence, and the "deconstruction" of the "deep state," got us here