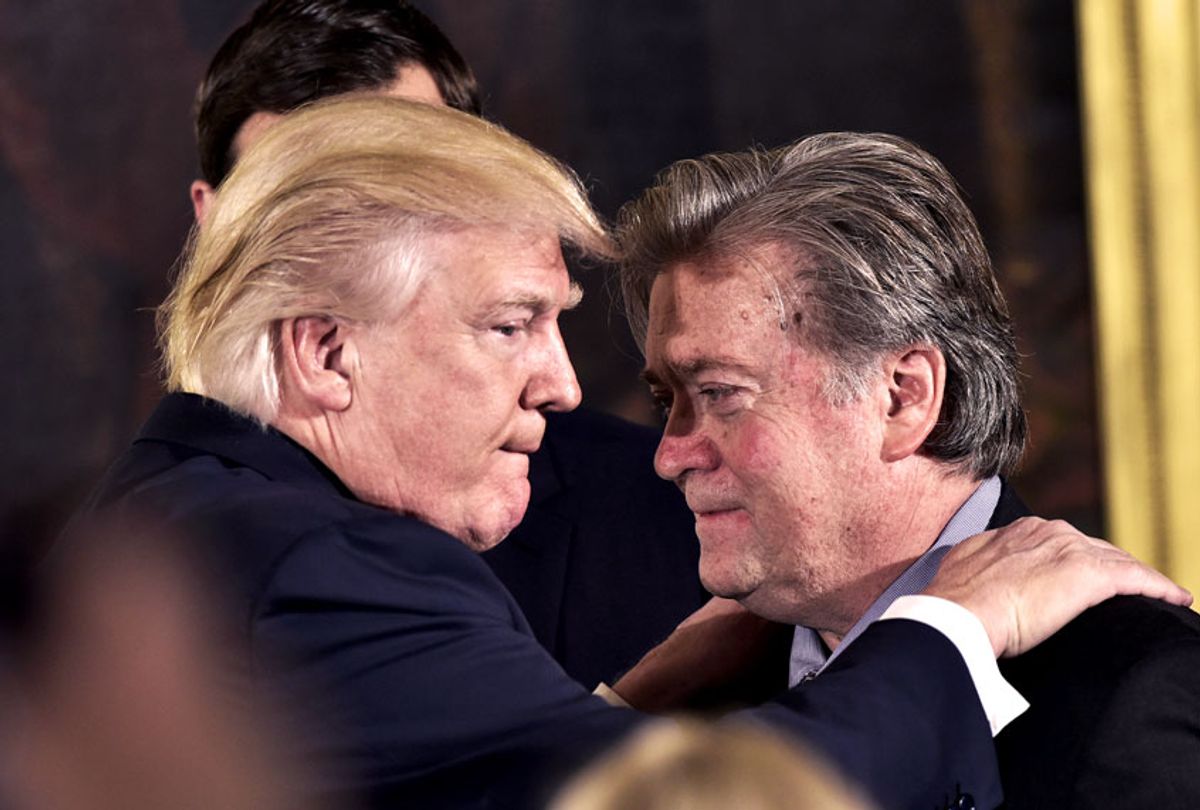 One of the more memorable quotes from the 2020 post-election period was the one in which a Republican insider blithely told a reporter for the Washington Post that there was no harm in letting Trump cry himself out:

"What is the downside for humoring him for this little bit of time? No one seriously thinks the results will change," the official said. "He went golfing this weekend. It's not like he's plotting how to prevent Joe Biden from taking power on Jan. 20. He's tweeting about filing some lawsuits, those lawsuits will fail, then he'll tweet some more about how the election was stolen, and then he'll leave."

We all know how that turned out, don't we?

Today, the congressional Jan. 6 commission continues to subpoena witnesses and demand documents from various players in the post-election saga, and the press keeps reporting new information on exactly what went down during that bizarre period weekly. Last month, the new book from Bob Woodward and Robert Costa, "Peril," revealed the existence of a full-blown coup plot based upon a legal theory advanced by conservative constitutional lawyer John Eastman, formerly of Chapman College and a founder of the Claremont Institute, a right-wing think tank. They actually memorialized what they planned to do in writing.

The idea was to have Mike Pence refuse to acknowledge the electoral votes of certain states whose legislatures might be persuaded to send an alternate slate of electors and then declare Trump the winner based upon the remaining electoral votes. It was a cockamamie scheme, but the concept of Republican state legislatures declaring that the vote was rigged and sending an alternate slate to declare Trump the winner did not come from nowhere. I wrote this in November 2020, just a couple of weeks after the election:

Having lost over and over again in court, Trump and his team have switched to their Plan B, which, as longtime Democratic strategist Chris Marshall spelled out in detail in Salon on Thursday, is to delay the certification of the vote in certain states and try to get Republican legislatures to assign electors to vote for Donald Trump instead of the actual winner, Joe Biden. This is based on the theory that if they can create enough chaos around the election results, Republican loyalists will rise to the occasion and "save democracy" from the Democrats, who are allegedly stealing the election.

Trump's behavior with all these phony "audits," even in places like Texas where he won, is explained as an extension of that plan. They are attempting to create so much distrust in the electoral process that in the case of a semi-close election, the default "solution" will be for the (Republican) state legislatures to take over the process and decide the winner. Lest you think the courts would automatically reject such a clearly unconstitutional move, don't count on it. As the New Yorker's Jane Mayer noted:

Few people noticed at the time, but in … Bush v. Gore, Chief Justice William Rehnquist, along with Antonin Scalia and Clarence Thomas, hinted at a radical reading of the Constitution that, two decades later, undergirds many of the court challenges on behalf of Trump. In a concurring opinion, the Justices argued that state legislatures have the plenary power to run elections and can even pass laws giving themselves the right to appoint electors.

Today, the so-called Independent Legislature Doctrine has informed Trump and the right's attempts to use Republican-dominated state legislatures to overrule the popular will. Nathaniel Persily, an election-law expert at Stanford, told me, "It's giving intellectual respectability to an otherwise insane, anti-democratic argument."

That's the legal argument. The implementation will require provocateurs to help foment the chaos and distrust on the ground. Enter Trump's former campaign chairman (and pardoned accused felon) Steve Bannon. You may recall that Bannon was heavily involved in the Jan. 6 planning, urging Trump to "kill the Biden presidency in its crib" and promising listeners of his wildly popular podcast the night before that "all hell will break loose tomorrow. It's them against us. Who can impose their will on the other side?"

ProPublica did extensive reporting last month showing that since then Bannon has been pushing a "precinct strategy," whereby MAGA followers take over the Republican apparatus at the precinct level, which in many states means they have influence over how elections are run, including the choice of poll workers and members of election boards. When Bannon announced this strategy, it "rocketed across far-right media" and suddenly people who had never before been involved in politics were volunteering all over the country, in blue states as well as red states, cities and suburbs and rural areas alike.

This strategy is the brainchild of Arizona activist Daniel J. Schultz, who has been pushing it for several years:

In December, Schultz appeared on Bannon's podcast to argue that Republican-controlled state legislatures should nullify the election results and throw their state's Electoral College votes to Trump. If lawmakers failed to do that, Bannon asked, would it be the end of the Republican Party? Not if Trump supporters took over the party by seizing precinct posts, Schultz answered.

Schultz is now a huge right-wing celebrity, has been on Bannon's show at least eight times and holds weekly Zoom calls with activists around the country. Last July he told his audience, "Make sure everybody's got a baseball bat. I'm serious about this. Make sure you've got people who are armed."

Bannon isn't confining himself to trying to destroy the democratic electoral system. NBC News' Jonathan Allen reported that he's also planning an assault on the government once he gets Trump back in the White House, as a continuation of his "deconstruction of the administrative state." To that end, Bannon held a meeting last week with "scores of former Trump political appointees" at the Capitol Hill Club and gave them their marching orders for the hypothetical day when Trump returns to power.

He was invited by a new group called the Association of Republican Presidential Appointees, which has the goal of having non-confirmable executive branch appointees ready on Day 1 to go in and take over. In practice, that means they would immediately set about systematically dismantling everything put in place under a Democratic president and deregulating everything in sight. Bannon aptly calls them his "shock troops."

Now maybe all this is just the lunatic fringe acting out and nothing will come of it. Bannon has been flogging this kind of anti-democratic strategy for a long time. But considering how radical the GOP establishment itself has become, it seems foolhardy to make that assumption. Inviting Bannon to address this ambitious new Republican group sends a clear signal that his previously outlandish ideas and strategies have become mainstream conservative thinking.