The new GOP House majority — same as the old but worse 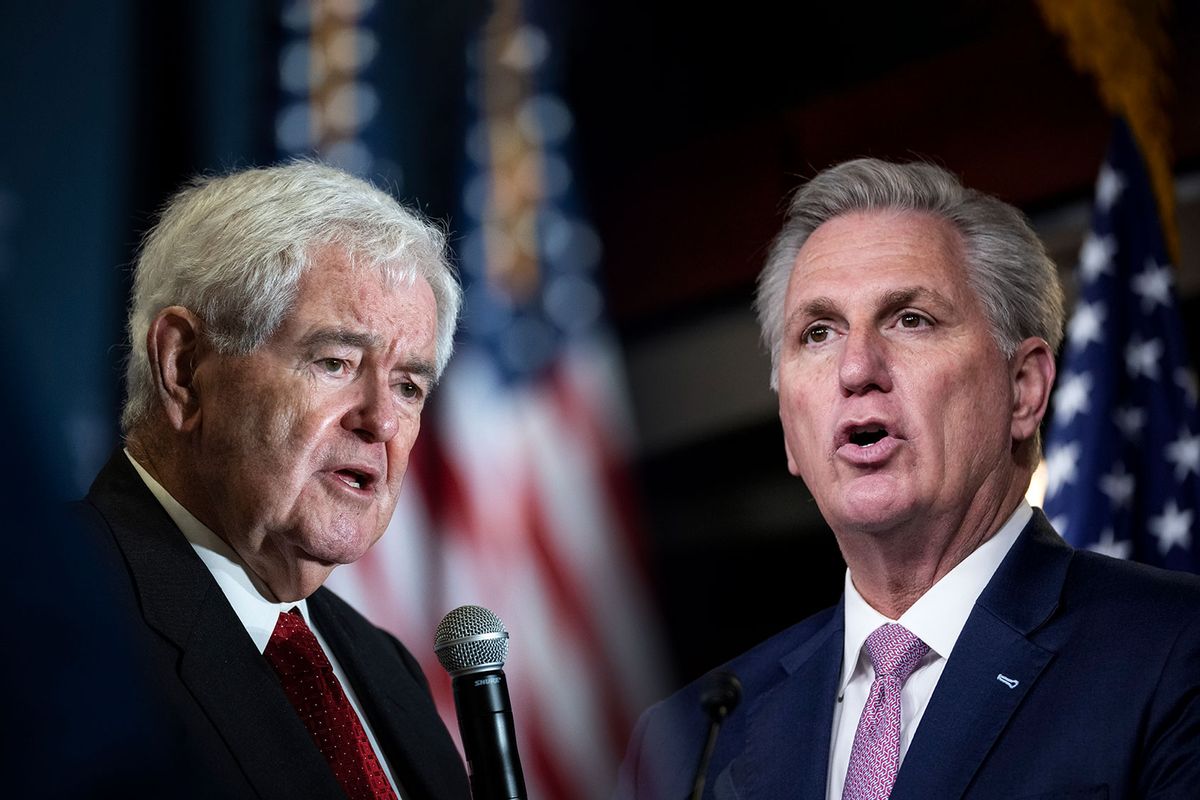 After spending the Trump administration cutting taxes for the wealthy and massively raising military spending, congressional Republicans are back to caterwauling about deficits. This was as predictable as the sun coming up in the morning. When Republicans are in power they give away the store and then when the Democrats are called in to clean up their mess, Republicans immediately rant and rave about government spending and the debt. This has been going on for decades and it would have been short-sighted to expect anything different from them this time.

Naturally, they're putting the safety net programs on the chopping block. The Washington Post reports:

In recent days, a group of GOP lawmakers has called for the creation of special panels that might recommend changes to Social Security and Medicare, which face genuine solvency issues that could result in benefit cuts within the next decade. Others in the party have resurfaced more detailed plans to cut costs, including by raising the Social Security retirement age to 70, targeting younger Americans who have yet to obtain federal benefits.

If that immediately brings to mind the words "Simpson-Bowles" (and makes you break out in a cold sweat) you might be like me and have PTSD from the last time this was introduced back in 2012. It didn't make it into law but only because the Freedom Caucus refused to take yes for an answer when the Obama team opened the door for some serious reductions in benefits. That wasn't the first time Democrats offered up cuts to those programs and were rebuffed. Back in 1995 when the House Republicans shut down the government to force spending cuts, Bill Clinton offered cuts to Medicare and speaker Newt Gingrich said it wasn't enough and walked away.

Opposition to any and all safety net programs is in the right's DNA.

Republicans have been trying to do away with these vital programs from the moment they were introduced. When Social Security was passed in 1935, only 2% of Democrats voted against it (ironically because it didn't go far enough) and 33% of Republicans voted against it. In those days it was out of fealty to corporate America which was appalled at the prospect of "destroying initiative, discouraging thrift and stifling responsibility." The program became popular and difficult to dislodge but Republicans never gave up. It wasn't long until the libertarian thinkers on the right were coming up with a new plan to replace the program with private investment accounts. This long-standing dream was finally formally proposed by George W. Bush in 2005 and it went down in flames. When the stock market crashed three years later in the epic financial crisis of 2008, that idea mercifully died a quiet death.

Medicare had the same trajectory. Former president Ronald Reagan helped to make his name as an opponent of Social Security and Medicare back in the early '60s. In those years before social media, he had a big hit with a spoken word record album entitled "Ronald Reagan Speaks Out Against Socialized Medicine" which came out in 1961, as the program was still in the proposal stage. He said:

One of the traditional methods of imposing statism or socialism on a people has been by way of medicine. It's very easy to disguise a medical program as a humanitarian project, most people are a little reluctant to oppose anything that suggests medical care for people who possibly can't afford it... it's simply an excuse to bring about what they wanted all the time: socialized medicine.

When he was a congressman, vice president Mike Pence voted against Medicare Part D, the program's drug benefit, along with dozens of other Republicans. And I don't think I need to recapitulate the hysterical opposition to Obamacare, which they also claimed was a swift descent into socialist hell.

This new House majority is driven by one thing and one thing only: owning the libs.

Opposition to any and all safety net programs is in the right's DNA. The problem for them, however, is that these programs are popular so they have been unsuccessful in eliminating them altogether. So instead they've managed to protect their wealthy benefactors from having to kick in more money, which they could easily afford, to shore up the finances. If they can slowly starve the programs (and the people who depend upon them) they may just win in the long run.

What's different with the new Republican majority's plans is that there is no ideological rationale for doing it anymore.

In the past you had the likes of Reagan and Gingrich, influenced strongly by anti-communism and libertarian, free-market dogma, proposing to end these so-called entitlement programs because they were evidence of creeping socialism. In the words of anti-tax activist Grover Norquist, the federal government must be shrunk to a size so small it could be drowned in the bathtub. "Small government" and "local control" were their watchwords. Today, what we have known as the modern conservative movement barely exists in any recognizable sense. They constantly throw the words "freedom" and "socialism" around, but they have no discernible meaning except as weapons in the culture war. GOP governors like Florida's Ron DeSantis require businesses to bend to his will or risk state sanction while books and topics that Republicans don't like are being officially censored by the government in public schools and universities. They are full-blown authoritarians --- their supposed "live or let live" libertarian ethos (always pretty weak in my opinion) drowned itself in the bathtub when Donald Trump came down that golden escalator.

Sorry, Twitter, but Florida's war on books is no joke. Ron DeSantis wants to keep kids from reading

This new House majority is driven by one thing and one thing only: owning the libs. Shutting down the government or holding the debt ceiling hostage for the ostensible purpose of lowering the deficit is just a power play to them for the purpose of showing they can do it. If they have to crash the world economy in the process, so be it.

It remains to be seen if this new House majority will use the safety net as leverage in their debt ceiling game of chicken. Donald Trump is adamantly against it because his feral instinct tells him that even attempting to do it is unpopular with older voters, his base. The fact that instead of putting it directly into their negotiations and instead creating some "special panels to look into it" suggests that even the House crazies understand that the risks are high with no chance of reward. (President Joe Biden will never sign a bill cutting these programs in an election year.) But they'll put on some kind of show for the Fox News crowd anyway. After all, if the whole point is to own the libs, the mere threat is all it takes to give their followers a thrill.