Sorry, Twitter, but Florida's war on books is no joke. Ron DeSantis wants to keep kids from reading

In Florida schools, every book is considered too "dangerous" until the censors have combed it over 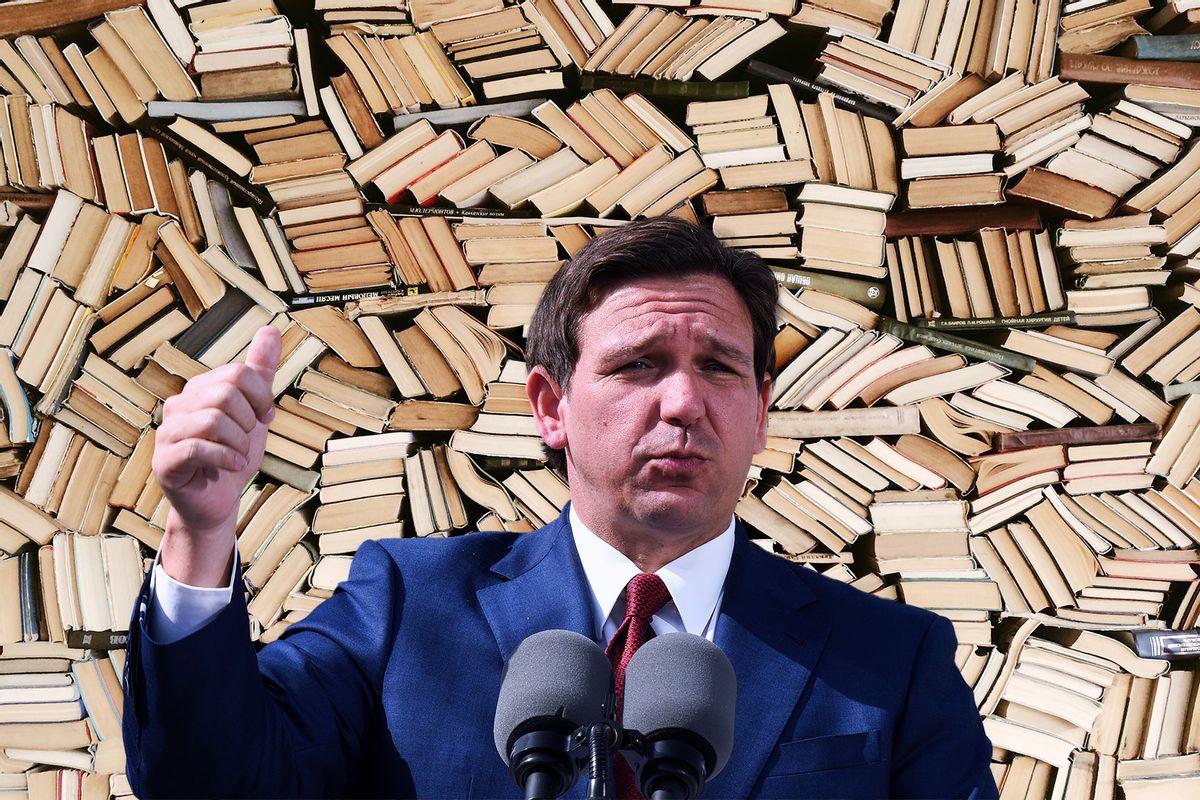 For those who are paying attention, it's been obvious for some time that Florida's mega-MAGA governor, Ron DeSantis, is aggressive with book bans because he would just prefer it if kids didn't read books at all. So while it was infuriating, it was not surprising to read that the investigative journalism team at Popular Info had discovered that teachers in Manatee County, Florida were told that every book on their shelves was banned until otherwise notified. Failure to lock up all their books until they could be "vetted" by censors, teachers were warned, put them at risk of being prosecuted as felons.

The facts of this situation are straightforward: A Florida law signed by DeSantis requires that every book available to students "must be selected by a school district employee who holds a valid educational media specialist certificate," in most cases, the school librarian. This may sound reasonable on its surface, but as the situation in Manatee County shows, in reality, it's about creating a bottleneck preventing books from getting into the hands of students. Even more importantly, it's about establishing the idea that books are inherently dangerous objects, to the degree that no student can be allowed to handle one without heavy-handed surveillance.

Moreover, even if the librarians in Florida are not themselves interested in being the reading police, they may feel they have no choice. DeSantis has made it quite clear what kinds of ideas he believes should be banned in the state of Florida. He doesn't want schools to acknowledge that LGBTQ people exist. He's banned the teaching of Black history classes on the grounds that lessons on people like Frederick Douglass or Rosa Parks, for instance, "have no educational value." He has been forcing schools to teach a lie, that racism is not the cause of racial inequality. With that level of pressure, it is no surprise that schools would simply err on the side of having few, if any, books available. If books return to the shelves, they may likely be heavily limited to those that portray the world like it's a 1950s sitcom, which pretty much guarantees they'll go unread, as such themes hold little interest to kids in 21st-century America.

Ron DeSantis is aggressive with book bans because he would just prefer it if kids didn't read books at all.

When it comes to keeping kids from reading much, if at all, DeSantis' policy is a smashing success. He's established the idea that no student should ever be allowed to just grab a book and read on their own. He's stigmatized basic curiosity. Big Brother must always be watching, a reference kids probably won't get if "1984" is no longer a book readers can just pick up.

"Statewide book bans" are coming to Florida's classrooms, enforced by the far right

Popular Info's head, Judd Legum, saw his tweets on this subject go viral this week. But since Twitter is now owned by a right-wing troll, Elon Musk, it is no surprise that the company decided to attach a "community note" that downplays how extensive the Florida censorship is. But the community note, which read "only unvetted books will be removed," is misleading to the point of being an outright lie. As Legum noted in his follow-up, since all the books are "unvetted," all the books were removed.

As Legum noted in a follow-up, this isn't limited to this one county. In Duval, a principal warned teachers that allowing students to read books could result in felony prosecution.

The language of "vetting" and whatnot is put in place by DeSantis and his allies to create just such a misleading debate about the nature of censorship. As with the draconian "don't say gay" law, the policies are written in such a vague way that defenders can pretend that they're limited in scope, while in fact, enforcement is broad. Defenders pretended the "don't say gay" law merely blocked "instruction," as if there were teachers giving how-tos on blow jobs. In reality, the word "instruction" is so vague that students and teachers feel they have to err on the side of pretending everyone is straight, lest they get accused of "instructing" kids about queer lives.

Policies like this have a ripple effect, recasting reading not as a social good but a threat to be strictly regulated.

A similar game is being played with the "vetting" language. Book ban supporters can claim they're not banning books because, in theory, books can be "vetted" and restored to the shelves. Of course, this is how all book bans throughout time have worked. They rarely, if ever, cover all the books all the time. But even when books are finally released to potential readers under a "ban first, ask questions later" system, the message is sent: Books are presumed inherently dangerous. Instead of being glad that a child is reading a book, the system treats every child with a book as suspicious. Policies like this have a ripple effect, recasting reading not as a social good but a threat to be strictly regulated.

Even the surface defenses of book bans are disgusting, of course. Accusations that kids are being "groomed" by reading books with LGBTQ characters imply both that queer identities would disappear if they weren't acknowledged and also that would be a good thing, two repugnant arguments.

But there's an even deeper reason that book bans are such a mainstay of authoritarian politics, even as the ideas being suppressed shift from regime to regime. Authoritarians hate reading for the same reason they hate sex, or any private behavior that allows people to experience thoughts and feelings outside of the authoritarian's control. Learning to sit quietly and read by yourself is, for most people, the first step towards being able to sit with your own thoughts. It's crucial for learning to think for yourself. There's a reason most teachers like to have a wide array of books on hand, giving kids the freedom to read on their own. It's how kids develop other skills, like critical thinking and creativity.

Of course, all that is exactly what DeSantis is afraid of. He may occasionally make noises about freedom, but his actions speak clearly of his goal, which is to turn Florida students into a bunch of unthinking right-wing robots. This is a man who released an ad where he bragged about teaching his young child to parrot "build the wall," after all. He's never hidden his loathing for education and his preference for indoctrination. Books are being banned en masse in Florida schools. That's not an accident or a side effect, but always very much by DeSantis's design.