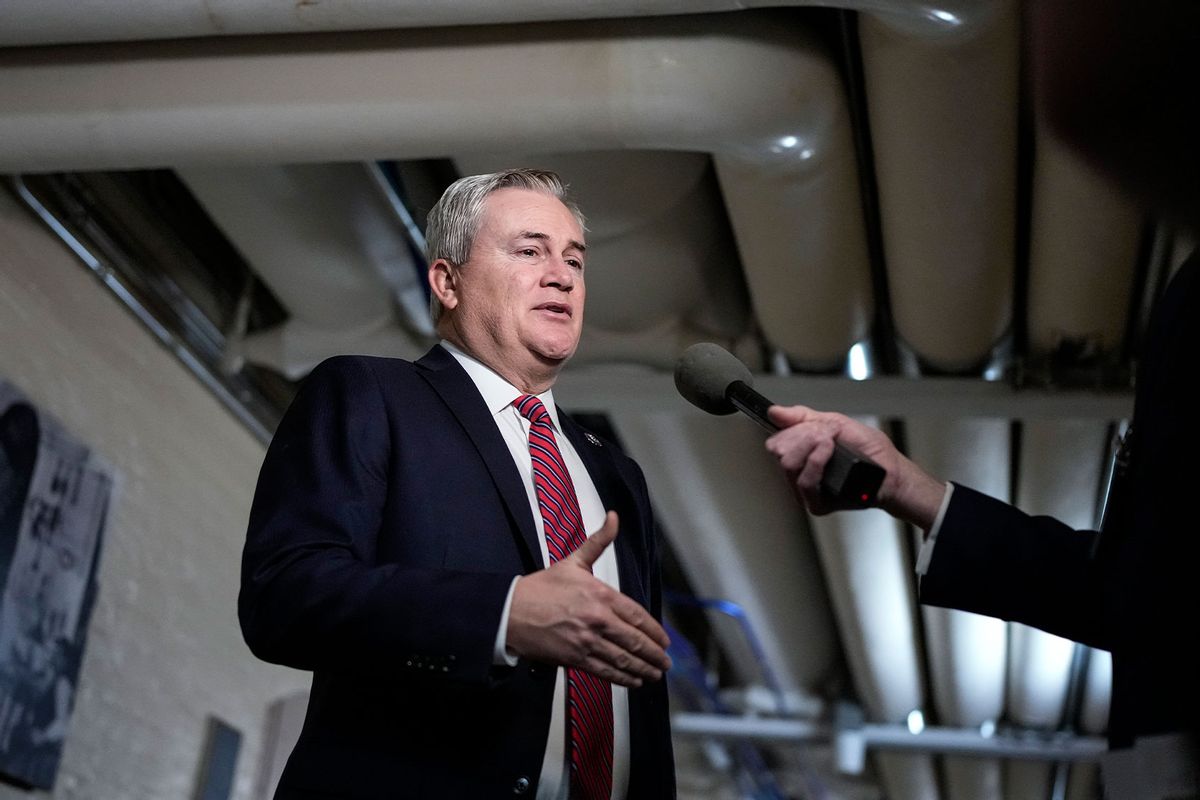 Chairman of the House Oversight Committee Rep. James Comer (R-KY) speaks to reporters on his way to a closed-door GOP caucus meeting at the U.S. Capitol January 10, 2023 in Washington, DC. (Drew Angerer/Getty Images)
--

The House Oversight and Accountability Committee is expected to create a new panel targeting cybersecurity and government IT, according to the Federal News Network. The chamber's central investigative body, chaired by Kentucky Republican Rep. James Comer, aims to create five new subcommittees, according to a draft document obtained by the outlet.

Hill staffers familiar with the matter said the cybersecurity committee will be one of two subcommittees created by re-dividing the Government Operations Subcommittee, according to a Tuesday report from Fedscoop. The other subcommittee will focus on federal workforce issues. The split rolls back a move by former Oversight chair Rep. Gerry Connolly, D-Va., who combined the two panels in 2019 under the Government Operations Subcommittee.

The full Oversight Committee will need to vote on the five new panels, and their composition could be changed in the meantime. So far, though, the draft document said the proposed Cybersecurity, IT and Government Innovation Subcommittee will take up "legislative and oversight jurisdiction over issues related to information security, including cybersecurity and privacy; government-wide federal information technology management and innovation; and procurement."

The GOP is about to go wild with phony Biden investigations. The media must not take the bait

The panel's expected reappearance comes during a watershed year for long-overdue federal cybersecurity spending, as agencies rush to modernize outdated and vulnerable IT systems with budget funds approved last year. But the GOP has targeted a number of those agencies in calls for cybersecurity spending oversight.

House Speaker Kevin McCarthy, R-Calif., has pledged to repeal $80 billion in IRS funding -- the agency's share in the $430 billion Inflation Reduction Act package. The funding includes $4.8 billion allocated to bring the agency's antiquated IT systems up to 21st-century security standards and gives the formerly funding-starved agency the option to dip into $25 billion more for IT programs.

The Federal Trade Commission, the Department of Homeland Security and the Cybersecurity and Infrastructure Security Agency have all been subject to similar oversight calls from the GOP. Comer has previously shown interest in investigating government involvement in Twitter over the site's efforts to stymie political and medical misinformation campaigns -- a move that far-right critics claim involved the corruption of CISA by the DHS.

However, Comer was a key figure in the Oversight Committee's prior bipartisan efforts to modernize federal agencies' cybersecurity posture, during the panel's investigations into the SolarWinds hack. Comer called the unprecedented government breach "a wake-up call" during the 2021 hearings, emphasizing that "the governance structure of federal cybersecurity, the maturity of our cyber defenses, and the effectiveness of our oversight tools were no longer up to the task."

Comer's position has been relatively consistent. In 2020, he also signaled support for extended cybersecurity investment in the face of increasing global cyber threats.

Former Rep. Will Hurd, R-Texas, previously chaired the IT subcommittee but there has been no word on who would replace him. Hurd's notably bipartisan work with then-ranking member Rep. Robin Kelly, D-Ill., gave early shape to current national cybersecurity and AI task force strategies -- particularly the duo's focus on besting Chinese market competition as a way to drive global AI ethics standards.

While House chair appointments are trending toward GOP hardliners in the 118th congress, similarly bipartisan leadership on the subcommittee would be a welcome development for White House AI task force officials, who now seek $2.6 billion over six years to create a shared hub for public-private research and development.

Comer, in a lengthy Jan. 19 letter replying to the White House Office of Science and Technology, didn't necessarily throw cold water on the request -- but loudly signaled the potential for investigative oversight with 17 questions on the office's recently released Blueprint for an AI Bill of Rights.

Comer's office did not immediately respond to Salon's request for comment.

Following the expected split of the Government Operations Subcommittee, the GOP also plans to create a new Government Operations and Federal Workforce Subcommittee. The draft document said the panel will oversee "the federal civil service, including compensation, classification and benefits; federal property disposal; public information and records, including the Freedom of Information Act, the National Archives and Records Administration and the Presidential Records Act; government reorganizations and operations, including transparency, performance, grants management, and accounting measures generally; and the relationship between the federal government to the states and municipalities, including unfunded mandates."

FNN also reports three other subcommittees will be created.

One subcommittee will be on economic growth, energy policy and regulatory affairs. Its jurisdiction will include "federal paperwork reduction and information collections; population and demographic studies; labor policies; and impediments to economic growth and job creation."

about the House GOP crusade