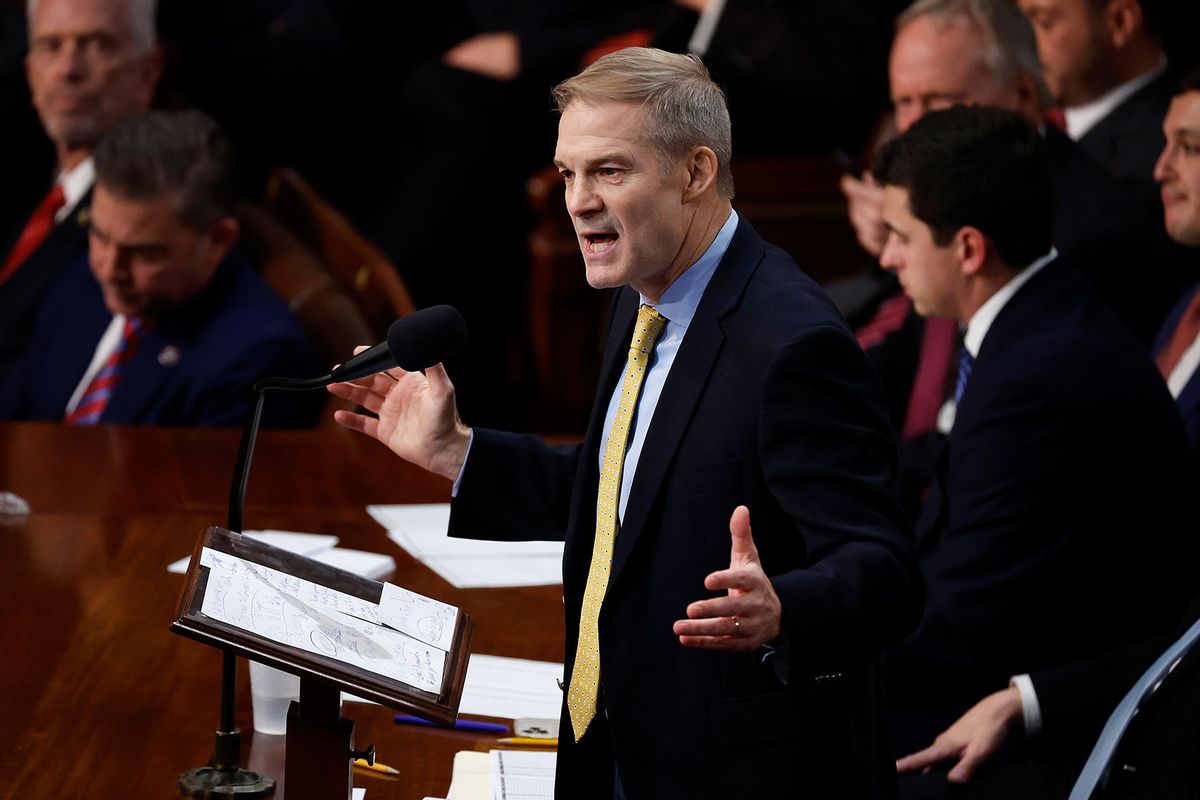 Rep. Jim Jordan (R-OH) nominates House Minority Leader Kevin McCarthy (R-CA) for Speaker of the House of the 118th Congress during a speech in the House Chamber of the U.S. Capitol Building on January 03, 2023 in Washington, DC. (Chip Somodevilla/Getty Images)
--

House Judiciary Chairman Jim Jordan, R-Ohio, is considered a potential witness to the Jan. 6 attack on the Capitol and has refused to comply with former House investigators' subpoenas — but on Tuesday he was appointed chairman of the newly formed House Select Subcommittee on the Weaponization of the Federal Government.

Under Jordan's lead, the Government Weaponization subcommittee will investigate allegations of anti-conservative bias among federal law enforcement. As reported by The New York Times, the House resolution authorizing the 13-member subcommittee may allow Jordan to subpoena the Justice Department about its inquiries into Trump's failed bid to overturn the 2020 election and his handling of classified documents.

If the committee is granted access to records normally restricted to Congressional intelligence committees, the GOP-majority panel could potentially have the authority to investigate the Justice Department — even as the department investigates lawmakers' actions concerning Jan. 6.

In a Tuesday floor speech, Jordan claimed that the subcommittee aims only to protect First Amendment rights, such as those of conservative families who appear at local school board meetings and anti-abortion activists who target reproductive health centers.

"We don't want to go after anyone. We just want it to stop," Jordan said. "That's what this committee is all about, and that's what we're going to focus on. That's what we are going to do."

"You've got the FBI, that paid Twitter $3 million -- not one, not two, but $3 million -- to censor conservative viewpoints on their platform," Jordan claimed.

"The GOP's Weaponization Select Subcommittee is a fascist power grab to evade accountability for Jan. 6," Bush said. "They don't care about government weaponization against Black & brown communities, for example. They just want access to investigations into them and their cult leader Trump."

"The federal government has already been weaponized by Republicans against Black, brown, and other marginalized groups," Pressley said in a Tuesday tweet. "So unless they're investigating themselves, this Insurrection Protection Committee is a sham."

Rep. Jerrod Nadler, D-N.Y., the top Democrat on the Judiciary Committee, opposed the subcommittee on Monday in a floor speech. The panel's former chairman called it an "attack on law enforcement agencies" and cautioned members against stoking extremist violence.

"The Select Subcommittee undermines the safeguards of our democracy and emboldens MAGA extremists who'd rather see our institutions fail than see Democrats and President Biden succeed," Nadler said.

Ethics advocacy groups joined the outcry. Noah Bookbinder, a former federal prosecutor and president of the nonpartisan watchdog group Citizens for Responsibility and Ethics in Washington, denounced the subcommittee on Twitter.

"This new House subcommittee, specifically set up to investigate ongoing investigations by the Justice Department and FBI into Donald Trump and others, is dangerous and threatens accountability and the rule of law," Bookbinder wrote. "We can't accept this as normal."

about the new GOP House majority