Yeah, the GOP is coming for Biden, but the new House majority's No. 1 job is shielding Trump from accountability 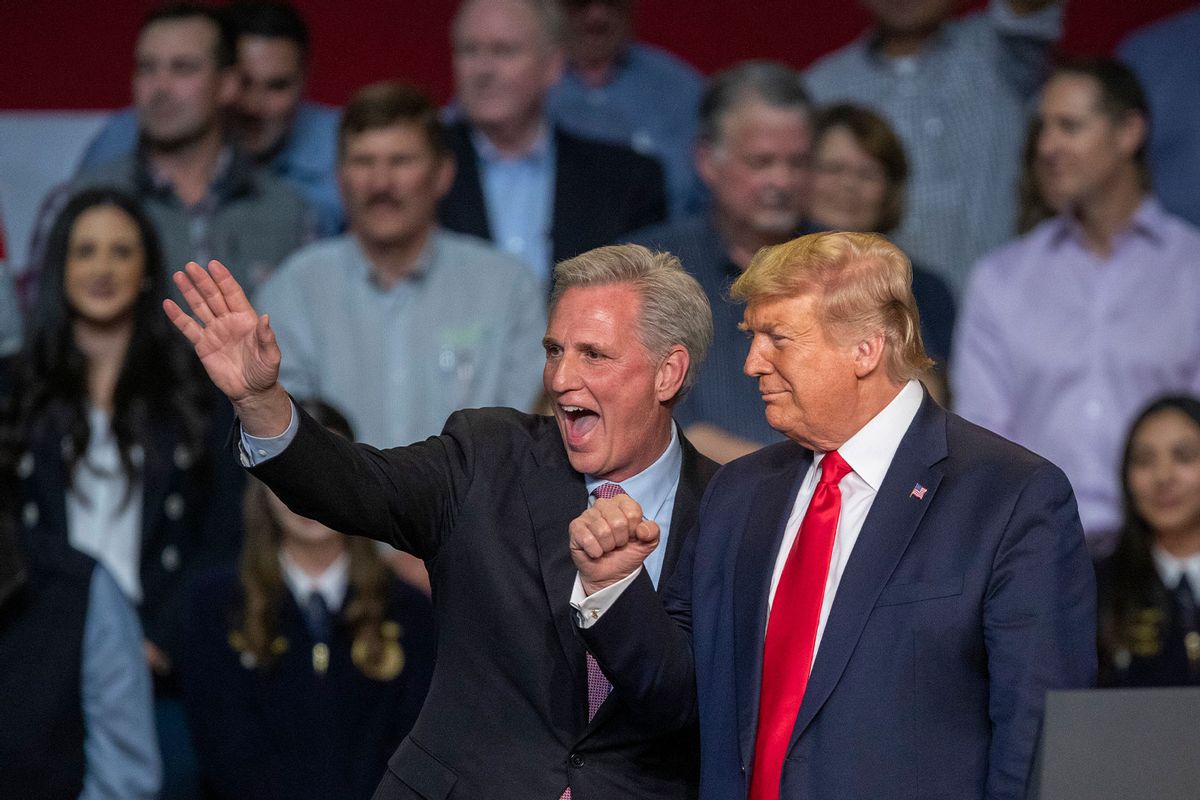 Tradition dictates that the political party in charge of Congress signals its priorities to the American people in the very first bills it passes after convening. After the "blue wave" of 2018, the Democrats gained control of the House and immediately passed the For the People Act, meant to protect voting rights. In 2021, with a narrower majority, Democrats passed the bill again. Sadly, both times the legislation collapsed in the Senate, a victim of the filibuster and the GOP's sweeping rejection of voting rights. Still, the message was sent and received: Democrats believe in extending and safeguarding the right to vote, unlike other parties that back a certain fascist-flavored, orange-hued pseudo-billionaire.

After last week's protracted and frankly hilarious intra-GOP battle over the speakership, Republicans got straight to work passing their first big messaging bill: Allowing rich tax cheats to evade legal consequences for defrauding the government. The bill would rescind an $8 billion-a-year expansion of the IRS budget that was signed into law by President Biden last year. That money is meant to address numerous issues, such as improving customer service (which everyone ought to want), but Republicans haven't tried to hide what truly offends them her: Money earmarked for pursuing criminal prosecutions of wealthy tax evaders.

In their usual dishonest fashion, Republicans have been demagoguing this issue for months, falsely implying that the Biden administration wants to go after middle-class people who fudged a little in estimating the value of their donations to Goodwill. In reality, as many experts have pointed out, this funding is meant to make it less likely the IRS will go after ordinary people. More resources means prioritizing the wealthy tax cheats who have consistently been able to outspend the IRS on legal fees, and often avoid serious consequences. If this GOP bill were to pass, it would result in more than $100 billion in lost government revenue, much of that staying in the pockets of the yacht-owning class.

In the past, even Republicans knew better than to make their biggest messaging bill a public display of affection for moneyed criminals. But Trump currently faces both legal and political trouble from his long and storied history of tax fraud. Shortly after the House vote, the Trump Organization's former CFO, Allen Weisselberg, was sentenced to prison time for his role in Trump's tax evasion schemes. While Weisselberg's stiff sentence likely reflects his willingness to take the fall for Trump's crimes, as Urban-Brookings Tax Policy Center lawyer Steven Rosenthal told Mother Jones this week, the Trump tax returns released by House Democrats in December make clear that's not the only tax trouble Trump still faces. He's never gotten nailed for any of his likely tax cheating because Trump "overwhelmed" the under-resourced IRS. In other words, the Biden law is designed to catch lawbreakers of precisely the Trump variety. So consider this first bill of the House GOP majority — which will thankfully go nowhere — as a love letter to their favorite crooked ex-president.

While tax evasion is a subject near and dear to Trump's heart, this bill wasn't the only signal House Republicans have sent regarding shielding Trump and his cohort from consequences for any crimes they committed either for political advantage or personal gain.

For instance, one of the first changes McCarthy pushed through the House involved a series of rules meant to gut the Office of Congressional Ethics, an independent body empowered to investigate complaints about members of Congress. It's no mystery why this is a top priority for so many Republicans in Congress. Multiple GOP members have been under suspicion for the role they played in the insurrection of Jan. 6, 2021, and four were referred to the (now also defanged) House Ethics Committee by the Jan. 6 select committee last year. The Office of Congressional Ethics isn't under Republican control, which means there's a very real chance it could have found evidence of sedition-related crimes. Now, effectively disempowered, it may not get the chance.

While this assault on the ethics office is primarily about concealing a likely coup conspiracy, it also benefits the Republican caucus at large, which is flush with ethics violators of every stripe. Unsurprisingly, the newly-elected pathological liar Rep. George Santos, R-N.Y., was especially thrilled. "I think it's fantastic," he told Insider, which notes that Santos has already been referred to the office for his shady financial dealings.

House Republicans like to talk a big game about how much they hate corruption and law-breaking, but even the supposed actions they are taking on that front serve precisely the opposite purpose: They're meant to shield Trump and anyone else involved in his attempted coup after the 2020 election. The main example of this blatant two-faced strategy is the nascent subcommittee devoted to investigating (eye roll) the "Weaponization of the Federal Government." This ludicrous panel is being justified with a lot of disingenuous posturing about the "deep state" corruption of federal law enforcement, but as absolutely everyone knows, the real purpose of the subcommittee is to cover up, and perhaps embolden, both corruption and actual sedition. We can expect the committee to focus on harassing and threatening any Justice Department employees who dare try to enforce laws against political violence or seditious conspiracy against Trump and others implicated in the Jan. 6 insurrection.

Indeed, what's most remarkable about all these moves is how little effort Republicans are making to fool anyone about their real purpose. The feigned outrage at the Biden administration's imaginary corruption feels half-assed. When asked what the "weaponization" committee was supposed to investigate, Rep. Jim Jordan of Ohio coughed up some empty words about how the DOJ's power are too "far-reaching," before giving up and saying "I forget what it was" he's supposed to be angry about.

To be clear, Republicans were ethically challenged and prone to telling lies well before Trump came on the scene. The Office of Congressional Ethics was created in the first place in response to all the Republican ethics scandals of the George W. Bush administration, which ranging from bribery to alleged molestation of underage boys. Trump's gift to modern Republicans, however, was shamelessness. His ritual denials when accused of crimes or ethical transgressions have been blatantly insincere, when he hasn't simply openly bragged about getting away with it all. His enduring popularity with the GOP base was a kind of epiphany for other Republicans, demonstrating that their voters not only don't care if the people they elect are criminals, but often admire outright brazen defiance. So it makes sense that they're not even trying to hide the fact that their main priority is making it easier for Trump and his allies to get away with crimes. If anything, they believe their voters will love it.