Greene is walking the path laid by the Tea Party, in which today's extremists become tomorrow's new GOP normal 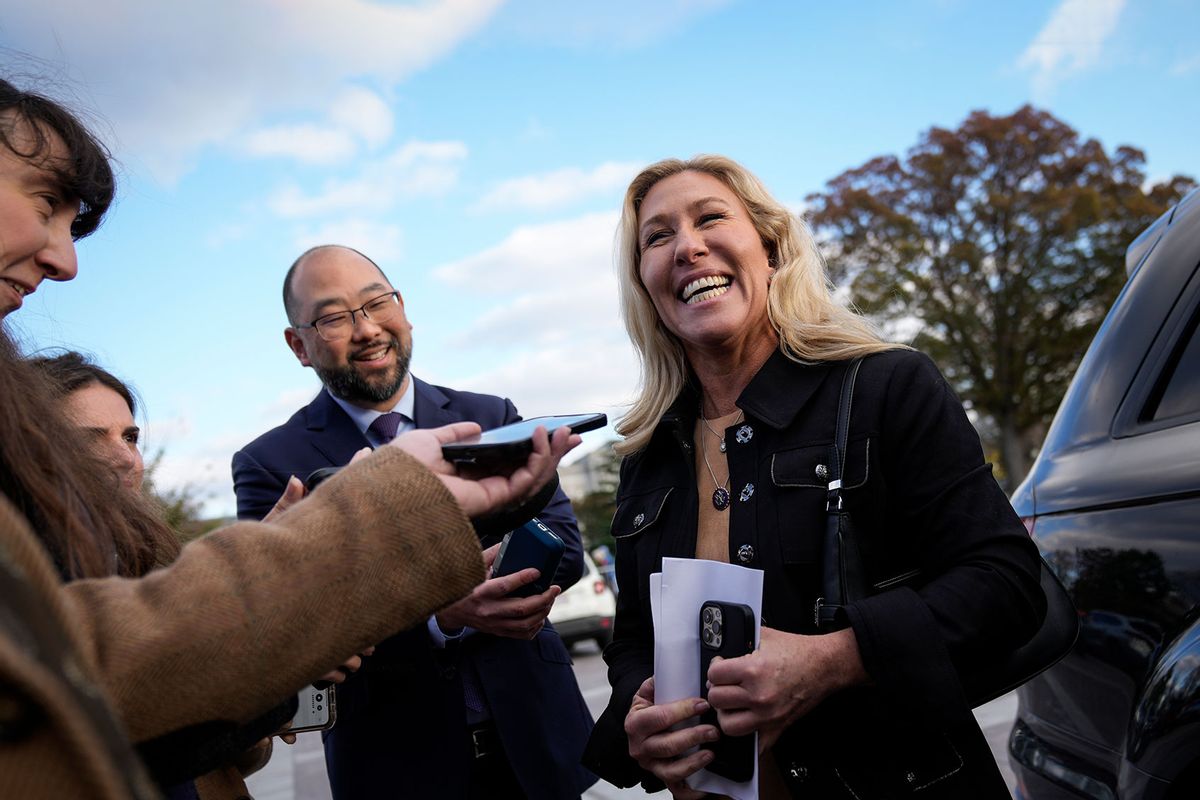 The battle over the Speakership dreams of Rep. Kevin McCarthy, R-Calif., was a cataclysmic event, in terms of the media's increasingly ineffective efforts to convey to news consumers what is actually going on. Most press coverage portrayed the struggle as one between a more moderate faction supporting McCarthy and a far-right splinter group who opposed him. In reality, however, the fight was merely showboating from a small group of trolls who wanted attention, with no real substance to any of the disagreements. Indeed, pro- and anti-McCarthy groups are in fierce agreement on nearly all major policy issues, including the question of whether democracy is a good thing worth protecting. (Both sides believe it is not!)

For proof there's no real daylight between the two factions, look no further than the fact that the biggest Republican troll in the House, Rep. Marjorie Taylor Greene of Georgia, was on Kev's side from the get-go. Greene has become one of the most famous — and powerful — Republicans in Capitol Hill by sheer dint of her gleefully unapologetic fascism. She's one of the biggest apologists for Donald Trump's Big Lie and the violent insurrectionists who attempted to overthrow democracy on January 6, 2021. She's a grade-A conspiracy theorist who rode into Washington spouting QAnon nonsense. Once in office, she went straight for the third rail in American politics, showy antisemitism, downplaying the Holocaust and raving about how Jews were setting wildfires with space lasers. She hits all the major stations of the conspiracy theory cross, from dismissing mass shootings as "false flags" to vaccine denialism to, naturally, 9/11 trutherism. She, of course, has also gotten that sweet, sweet attention by calling for the execution of her political opponents.

But she's all for McCarthy, because he is fine with all this, despite his media image of moderation. Greene, who is a much savvier operator than the liberals constantly dunking on her would like to admit, clearly realizes that being on the always-Kevin side of this fight opened up a golden opportunity: She can now rebrand herself as a mainstream Republican. With her shiny new committee assignments — complete with access to some of the most highly classified information in government — and her role as McCarthy's golden girl, Greene is set to remake herself into a respected figure on Capitol Hill. She'll be just as much a conspiracy theory kook as she ever was, but her new status as an elder statesman in the GOP will put an ennobling gloss on her lies, helping push them through the ever-credulous Beltway press.

That Greene is consciously rebranding herself became undeniable on Sunday, when she distanced herself from QAnon during a Fox News interview.

"Well, like a lot of people today, I had easily gotten sucked into some things I'd seen on the internet," she said when host Howard Kurtz asked her about QAnon. "But that was dealt with quickly early on. I never campaigned on those things. That was not something I believed in."

In one sense, these are easily debunked lies. Her involvement with the QAnon cult was not cursory, as she implies. She literally released a video prior to her election in which she argued "now there's a once-in-a-lifetime opportunity to take this global cabal of Satan-worshipping pedophiles out, and I think we have the president to do it." Her social media endorsements of political violence were often rooted in the false accusations that Democrats are pedophiles who drink children's blood.

But it's also true that, like many far-right conspiracy theorists, Greene doesn't actually believe the vile things she says. Truth has no value to her. She just says whatever she thinks will benefit her politically. In the past, that was endorsing every cockamamie conspiracy theory she could, since doing so got attention and helped her fundraise, both of which helped make her very powerful within the GOP. Now that she's made a name for herself, she's shedding the QAnon association so she can access the next level of power, which is being treated like a respectable politician.

Sadly, there's every reason to think this will work in a media environment where mainstream journalists are always eager to minimize the radicalism of Republicans and present them as "normal" politicians to the public. We saw this process happen with the Tea Party movement. In 2010, a bevy of Republican politicians got elected during this racist right wing tantrum wave against President Barack Obama. At first, they got the "look at these weirdos" coverage that Greene enjoys now. But it didn't take long for most of the Tea Partiers to reform their media images into middle-of-the-road politicians.

Former Vice President Mike Pence. Former White House chief of staff Mark Meadows. Former Secretary of State Mike Pompeo. Rep. Steve Scalise of Louisiana. Former White House acting chief of staff Mick Mulvaney. Sen. Ted Cruz of Texas. Sen. Tim Scott of South Carolina. These are just a sampling of politicians who rose to prominence aligned with the Tea Party movement, only to be converted in the media imagination to ordinary politicians — all without having to sacrifice their extremist views. In some cases, they obtained an unearned reputation as "reasonable" or "moderate" simply by flinching at how gross Donald Trump is, pretending they represented some check on his excesses or by criticizing him publicly.

McCarthy himself is a classic example of how much the mainstream press will conveniently forget when trying to dignify a Republican who initially broke into politics as a fire-breathing right wing extremist. McCarthy obtained his high status in the GOP by playing footsie with the Tea Partiers who took out one of his predecessors, John Boehner. He managed to win the Speakership through his slavish loyalty to Trump, including a willingness to vote to overturn the 2020 election. There is nothing moderate or normal about McCarthy. Still, due to a few opportunistic trolls on the Hill willing to paint him as a RINO, he gets to be treated not as the radical he is, but as a normal politician who is simply beset by fanatics.

Greene no doubt has seen this process of normalization and believes, correctly, that she can get in on it. She probably doesn't even have to give up some of her other bizarre "beliefs" regarding mass shootings or COVID-19. The press is so desperate for normal conservatives to cover that even the slightest nod towards rationality is read as permission to round up a Republican to the class of "responsible" politicians. Greene has hit the limit of what she can do while being known as the kookiest member of Congress. She's ready to graduate to a real power player who gets flattering press coverage. If past is predictor, she can expect to do so with a big assist from the mainstream media.