Calling Republican renegades "ultraconservative" doesn't cut it: This clown show is a symptom of the big F 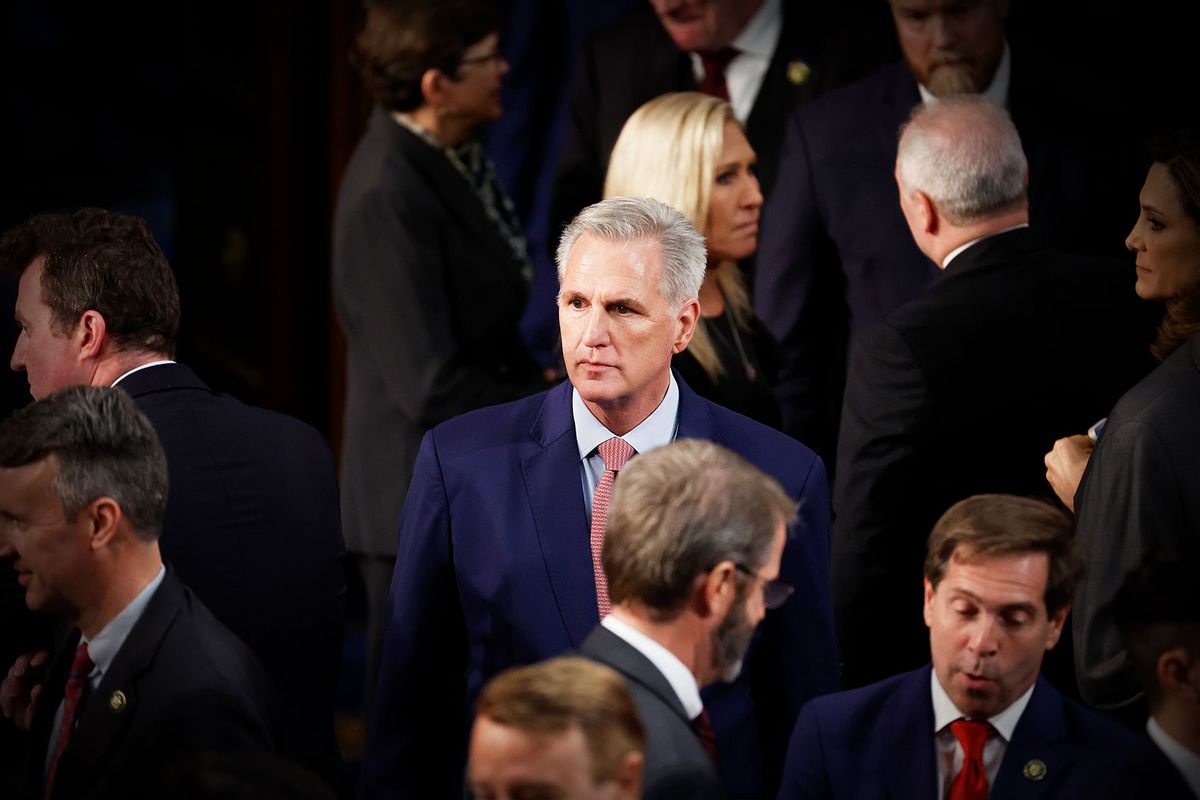 U.S. House Minority Leader Kevin McCarthy (R-CA) (C) walks among members of the House in between roll call votes for Speaker of the House of the 118th Congress in the House Chamber of the U.S. Capitol Building on January 03, 2023 in Washington, DC. (Chip Somodevilla/Getty Images)
--

It's been entertaining, in a dark sort of way, watching the mainstream media try to explain what is fueling the conflict between Rep. Kevin McCarthy, the House Republicans' supposed leader, and the 20 or so members of his own caucus who are preventing him from becoming House speaker. The New York Times called the anti-McCarthy faction "ultraconservative" and the Washington Post noted that most are full-on election deniers. Not only are these euphemisms for what they actually are — a bunch of fascists — it also falsely implies that the disagreement is ideological. It's not. McCarthy is in full agreement with the anti-democratic views of this group. He was among the 147 House Republicans who voted to overturn the 2020 election in the immediate aftermath of the Capitol attack. While McCarthy was initially cranky about the violence of Jan. 6, 2021, he has done everything in his power to shield the powerful conspirators who incited it, including Donald Trump himself, from any accountability.

There's no real daylight between the foaming-at-the-mouth fascists and McCarthy, much less other GOP leaders like Rep. Elise Stefanik of New York, a shameless coup booster and reborn Trump loyalist, and Rep. Steve Scalise of Louisiana, who once described himself as "David Duke without the baggage." Recognizing this, some political observers have started describing the fight as "personal," as if the anti-Kevins just don't like the guy. But that's not plausible either, since the common factor uniting the 20 or 21 holdouts is not personality type but the fact that they come from safe seats in deep-red districts. These folks are far more worried about losing a primary to someone who runs on a more-fascist-than-thou platform than about losing to a Democrat.

After McCarthy failed to win the speakership three times on Tuesday, the punishment continued on Wednesday. Those whom Team McCarthy dubbed the "Taliban 20" aligned with Democrats on the "let Kevin suffer" platform, allowing the voting to resume. After three more tedious roll-call votes in which absolutely nothing changed — except that the renegades are now voting for Rep. Byron Donalds of Florida, not Rep. Jim Jordan of Ohio — the House adjourned again with no speaker, no assigned committees, no members actually sworn in. (Actually, it adjourned twice, after briefly reconvening on Wednesday night.) Presumably they'll try again on Thursday, and perhaps some kind of deal will be struck, although no one seems to have a viable theory of what that will be.

So if this godawful mess is not personal or ideological, then what is it? Ultimately, it's not about Kevin McCarthy at all. It's about the Republican Party's self-conception in its exciting new fascist iteration (which was forged under Donald Trump but doesn't really have much to do with him either). Fascism needs to be understood less as an ideological movement and more as a movement devoted to the worship of power for its own sake, and also a dramatic aesthetic of constant warfare and performative purification of an ever-narrower conception of the body politic.

Ultimately this godawful mess isn't about Kevin McCarthy at all. It's about the Republican Party's self-conception in its exciting new fascist era, forged in the era of Donald Trump.

Those are big words, and I apologize, but here's a simpler way to put it: Fascists are a bunch of trolls who are never satisfied. They must always prove their power by ganging up on someone who's been cast as an "outsider." As the Atlantic's Adam Serwer famously observed, "The cruelty is the point." Most of the time, the targets are racial and sexual minorities, liberals or immigrants. But sometimes, that restless need to constantly bully someone manifests in purification rituals, where a once-trusted or even beloved insider is deemed an outsider who must be ritually purged. It's just Kevin McCarthy's turn in the proverbial barrel, though he almost certainly hasn't helped his cause by constantly debasing himself before the hardliners. He's marked himself as a weenie, and that just makes his tormentors enjoy watching him suffer even more.

House sh**show has a message for America: GOP can't govern and doesn't want to

The Trump era has, understandably, led to a nonstop and frustrating debate over what exactly "fascism" is. I favor the famous 1995 essay by Italian philosopher Umberto Eco, who argued that fascism is a movement of "rigid discombobulation, a structured confusion," replete with contradictions and incoherencies, and yet that "emotionally it was firmly fastened to some archetypal foundations."

In other words, fascism is about vibes more than fleshed-out ideas. Very, very authoritarian vibes. One big reason we can identify Republicans as fascist now is because while their appetite for power knows no end, their willingness to govern — that is, to use power to achieve substantive ends — has diminished to nothing. It's all vibes and no ideas, beyond an inchoate loathing of anyone they deem too dark-skinned, too queer or too literate to be truly American.

In his "Ur-Fascism" essay, Eco laid out 14 features of fascism, which add up not to a coherent political philosophy so much as a series of antisocial impulses. It's worth reading in its entirety, but the McCarthy debacle illustrates some of Eco's most important observations: Fascism is deliberately irrational. Indeed, it makes a fetish of irrationality. It's a "cult of action for action's sake" that believes thinking before acting "is a form of emasculation." The fascist believes that "life is permanent warfare" and therefore there must always be an enemy to struggle against. That's why fascists love conspiracy theories. Their "followers must feel besieged," and since they have no real oppressors to rail against, they make up imaginary ones.

After Trump's coup failed and the red wave of the midterms didn't materialize, Republicans are turning on each other. Even healthy political parties tend to have periods of recrimination after suffering bitter defeats. For the dysfunctional Republicans, however, this anger is being refracted through their increasingly fascist worldview, which is paranoid, irrational and hostile to democracy. That's why the demands made by the anti-McCarthy faction are incomprehensible and seem to change by the hour. The mentality that "life is permanent warfare" leads to the party's desire to constantly purify itself of the enemy within, in this case the despised "RINOs." But as more and more RINOs get purged, the definition becomes more expansive and maintaining party purity becomes almost impossible. Eventually, craven sycophants like McCarthy are rechristened as RINOs and thrown overboard. There is no endpoint where the party has finally cleansed itself.

Watching Republicans tear each other apart like this isn't just entertaining, but also useful. Fascists are always itching for a fight. Under Trump, that energy was directed outwardly at their perceived enemies: Democrats, liberal "elites," immigrants, LGBTQ people and eventually democracy itself. But as this House leadership fight has shown, fascists will also turn on each other like a bunch of weasels in a sack. With any luck, they tear themselves apart before they can tear democracy down.

Nancy Pelosi may not be the House Democrats' leader anymore, but her party are responding to this clown show in a way that shows they retain the unity and clarity of purpose Pelosi typically brought to their caucus. They are resisting the centrist punditry that insists Democrats have a responsibility to swoop in and protect Republicans from their own worst elements, as if saving their most vicious opponents from their own mistakes were somehow the same thing as saving democracy. We saw this impulse most recently in the media reaction to Democratic campaign ads highlighting the MAGA bonafides of certain far-right candidates to GOP primary voters, believing those kinds of radicals would be easier to beat in a general election. Those media criticisms were based on the shaky assumption that fire-breathing fascists are a bigger threat to democracy than supposed "mainstream" Republicans like McCarthy, who share their anti-democratic views but can play moderate in front of the cameras.

Watching Republicans tear each other apart is both entertaining and useful. Fascists are always itching for a fight, and given the chance they'll turn on each other like a bunch of weasels in a sack.

Well, the strategy of sowing internal discord among Republicans is working pretty well so far. A lot of the GOP's most egregious nuts lost their elections. Those who made it across the finish line are currently in the process of blowing their party up. Democrats are wise to continue refusing to bail Republicans out of their own mess. Even though Kevin McCarthy is the fascist crowd's newest piñata, that doesn't mean it's good for Democrats or democracy if he secures the speaker's gavel. He has no interest in governing. The plan, if we want to call it that, was to ignore legislation and appoint lots of House committees to spread conspiracy theories about Joe Biden and other political foes. McCarthy was also expected to use threats about the debt ceiling and a possible government shutdown in a pointless and destructive effort to force cuts in Social Security and Medicare. By far the best thing for democracy is if the Republicans simply implode and their nefarious schemes never come to fruition.

Frankly, I think that's why Senate Minority Leader Mitch McConnell just did a friendly bipartisan event with Biden in Kentucky, highlighting the benefits of infrastructure spending. Not long ago, McConnell would have done everything in his power to keep a Democratic president from getting credit for a popular program. He may now be starting to see the downside to this nihilistic approach to politics, which threatens to consume his entire party.

It's more than likely, however, that the Kentucky event will only sow more intra-party discord, further enraging the burn-it-all-down types and turning them even more forcefully against GOP leadership. Republicans may control the House, but they can't control their own worst impulses. Meanwhile, Dark Brandon and the Democrats continue to flip the politics of fascist trolling back in the GOP's face. Democracy is still at risk, make no mistake. But it now seems possible that its enemies may tear their own house down before they get the chance to destroy ours.