House sh**show has a message for America: GOP can't govern and doesn't want to 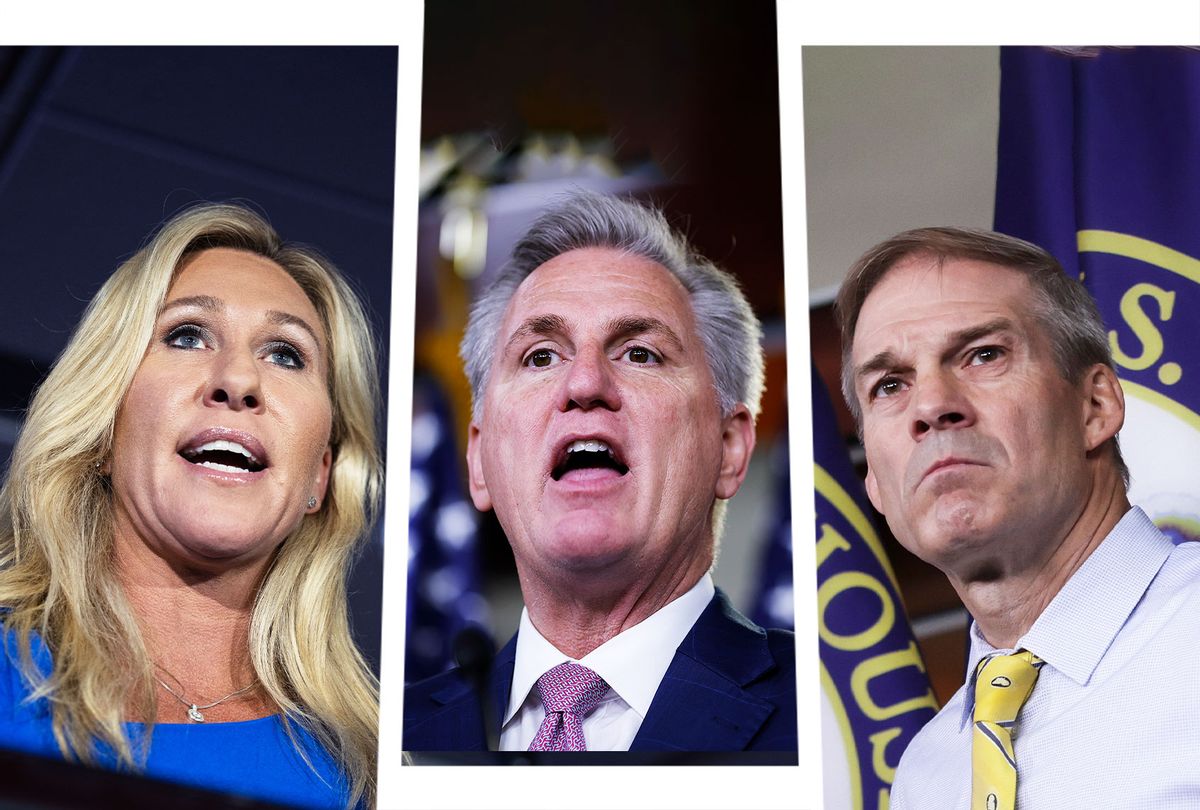 If anyone still labors under the impression that Donald Trump invented the shitshow that is the modern Republican Party, Tuesday's performance on Capitol Hill will have disabused them of that notion. It was déjà vu all over again, just like in 2015 when Kevin McCarthy was humiliated by far right bomb-throwers simply because he was so easy to humiliate, thus giving them leverage and pleasure in equal measure. Poor McCarthy spent the next seven years groveling and genuflecting to these extremists under the foolish impression that they would reward him for his fealty. As Salon's Rae Hodge lays out in detail, on Tuesday afternoon they simply laughed in his face and humiliated him again.

Back in 2015, the newly formed Freedom Caucus, born out of the Tea Party class that came into Congress five years before in the 2010 "shellacking," managed to force then-Speaker John Boehner to resign for having the temerity to make deals with the Democrats in the Senate and the White House in order to keep the government functioning. They were a rump caucus that didn't have the power to stop bipartisan legislation, but they had the leverage to both force Boehner out and prevent the ascension of McCarthy, his anointed successor.

At the time, McCarthy made it easier for them by telling the press that the congressional Benghazi hearings were a set-up to destroy Hillary Clinton (which was obviously true, and wouldn't even raise eyebrows in today's political environment). He also saw the whip count and knew he didn't have the votes of all those Freedom Caucus kooks, and abruptly decided to bow out. After all, the superstar GOP dreamboat and former vice-presidential nominee Paul Ryan was waiting in the wings and McCarthy knew he couldn't compete with those baby blues. Ryan took the job for four years but decided not to run for re-election in 2018, largely because those same people made his life as miserable as they'd made his predecessor's.

So this behavior was going on in the Republican Party before Donald Trump had ever uttered the words "Make America Great Again." He didn't invent this lunacy — he just watched it unfold and saw the opportunity to use it. After all, Trump had already done a test run with his birther nonsense, and liked the vibe. In effect, the GOP has been heading down this anarchic path for decades. Trump undoubtedly made it worse, but he didn't create it. Right now, in fact, he seems almost irrelevant to its descent into further madness.

Donald Trump didn't invent this lunacy — he just watched it unfold and saw the opportunity to use it. He did a test run with his birther nonsense, and dug the vibe.

Trump supposedly whipped votes for McCarthy and it did no good with the diehards. It remains to be seen if he still has the loyalty of the 30 to 40 percent of Republican voters he will need to remain viable in the presidential race, but he clearly has no pull in Congress. In truth, he didn't have much when he was president — his personal attacks on the late Sen. John McCain cost Republicans their most cherished policy objective, repealing the Affordable Care Act.

McCarthy's catering to the far-right faction hasn't done him a damn good either. In fact, the only people who anyone thinks might have some sway with this group are the real leaders of the Republican Party:

Tuesday night on Fox News, Sean Hannity evoked Ronald Reagan saying something about being loyal to the party, which will have zero effect on people who think of Reagan with the same reverence they have for Grover Cleveland or Calvin Coolidge. They are more likely to pay attention to Tucker Carlson, who had this to say:

That's paranoid nonsense that even the Republican House majority thinks is nuts, but I wouldn't be surprised if the crazies end up extracting this promise from whoever finally wins the gavel. Carlson is their intellectual guru, after all. And I think we know how this new "Church Committee" (as well as the "Laptop From Hell" committee and the "Lock Up Dr. Fauci" committee and all the rest) will actually unfold. These are not serious people dedicated to good-faith oversight. They're a nihilistic carnival act run by folks who are desperate for attention. We're in for a gruesome train wreck of a congressional session.

The problem with having insurrectionists within your own caucus is that they care nothing for the party, much less the country. They looked at the last three losing elections and now feel liberated to do their worst. All the anti-McCarthy members come from deep-red districts that voted for Trump by double digits. They have nothing personally to lose by acting out their darkest political fantasies. They didn't come to Congress to do anything but wreck the place and if that means taking their own party down with it, they couldn't care less.

As CNN's Ron Brownstein points out, Republicans consolidated their hold on red states in the last few elections. In 2022 they nailed down places like Florida, Texas, Iowa and Tennessee for the foreseeable future. But they also won 18 seats in districts that voted for Joe Biden, half of which are in New York and California, blue states which will see much higher turnout in a presidential-election year. They can't afford to lose any of those, but this House circus is going to put every one of those members on the chopping block.

If the last three elections have shown anything, it's that swing-state voters are decisively rejecting the far-right crusade that has so many people in red states spellbound. According to Brownstein, a new analysis of the midterms shows that "in the key House, Senate and gubernatorial races across the 15 states with the most competitive statewide contests involving candidates clearly identified with a Trump-style agenda, Democrats largely matched or even exceeded their 2020 margins — a remarkable showing during the first midterm election for the party holding the White House."

It's not hard to see why. In the last few years we've had one "historic" political crisis after another. Just since 2019 there have been two impeachments, a president refusing to honor election results, a violent insurrection and now, on the very first day of the new Congress, clear evidence that the most radical "Trump-style" officials in the GOP are pulling the strings and the larger majority in the party is helpless to stop them.

Let's hope that all those swing-state voters who came out in 2018, 2020 and again in 2022 will now understand that this isn't just about stopping Donald Trump, as worthy as that is. They need to make sure that Republicans are kept out of power until they demobilize this destructive faction and reinvent themselves as responsible, patriotic participants in the political process. They certainly aren't there yet, and maybe it's just a lost cause.