Put the popcorn away, folks: Kevin McCarthy is speaker of the House, and that's no joke

As usual, the mockery was a way to avoid the real emotions we should feel: How the hell did America get here? 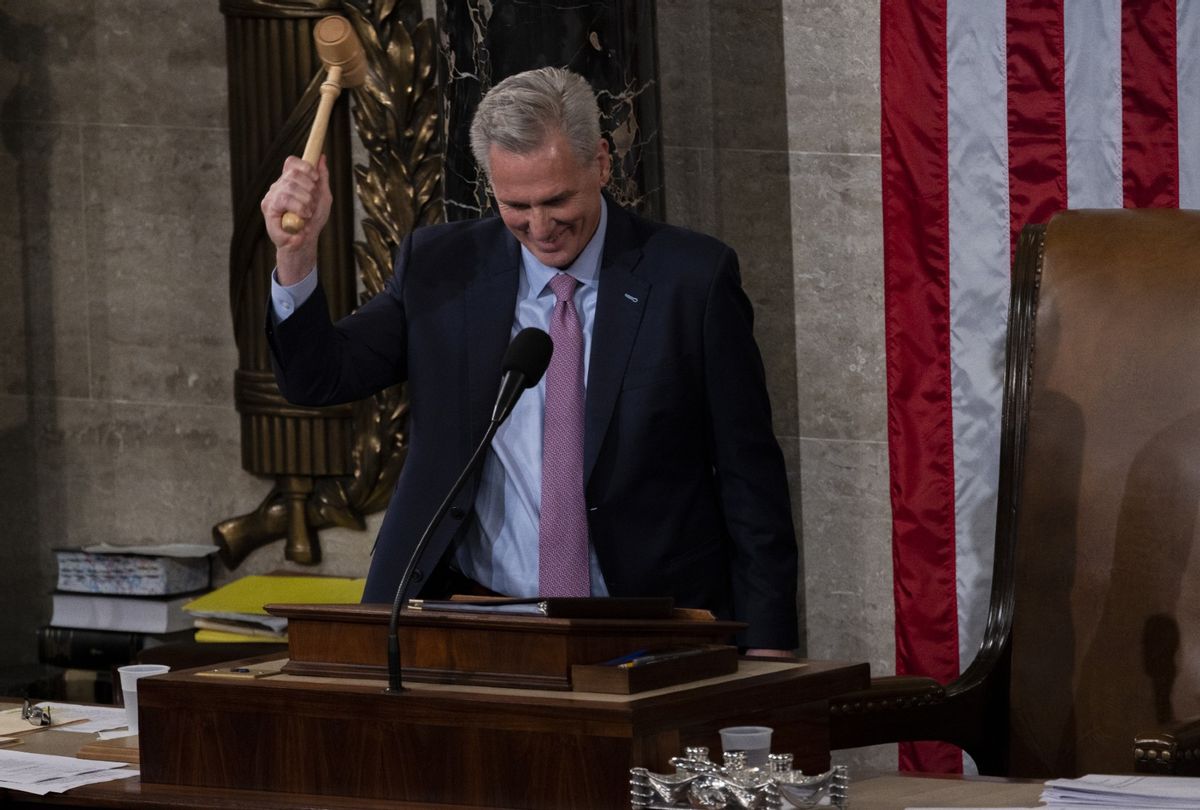 Today's Republican Party and "conservative" movement are agents of corrupt power and enemies of democracy. Their evident goal is to take away the civil and human rights of Black and brown people as well as women, LGBTQ people, people with disabilities, poor people, Muslims, nonwhite immigrants and perceived political enemies. At the same time, of course, they are eager to gut what remains of the social safety net and give corporations and the ultra-rich unrestrained power and control over American society.

Their idealized dystopian America will be a "democracy" in name only. In reality, it will be an apartheid pseudo-Christian plutocracy somewhat modeled on Putin's Russia or Viktor Orbán's Hungary, in which political dissent is not allowed and the rules of political combat will be rigged such that Republicans and their allies can remain in power indefinitely.

As we have seen in many other countries, democracies often rot from within as authoritarian forces infiltrate the system and its institutions with the ultimate goal of tearing them down. Healthy democracies can only be maintained through agreement on what constitutes truth and reality and a shared respect for legitimate political norms and institutions.

For the forces of political corruption, these elements are not understood as restraints on their behavior but as opportunities to be exploited and boundaries to be smashed. In a series of recent press releases, the Lincoln Project summarizes this peril:

The MAGA movement is the American version of the Taliban. Like the Taliban, MAGA embraces violence and threats to attain power.

They aren't interested in policy debates or real governance, only implementing their culture war to roll back individual rights, crush dissent, eliminate fair elections, and destroy our democratic institutions…..

The GOP is now controlled completely by MAGA. It is the party of chaos, destruction and is unconcerned with improving the lives of its constituents. The anarchy will only come to an end when Trump and MAGA are completely defeated.

As journalist Mark Jacob recently observed on Twitter, "There's no ideological clash in the GOP. It's just a disagreement over strategy. Some are what I call 'process fascists seizing power gradually through gerrymandering, stealing Supreme Court seats, etc. Others are 'express-lane fascists' who prefer chaos and violence (Jan. 6)."

The new Republican majority in the House of Representatives plans to attack the very idea of government legitimacy and oversight itself by engaging in conspiracy-theory "investigations" and de facto show trials of Hunter Biden (as well as his father), Nancy Pelosi, Dr. Anthony Fauci, Hillary Clinton and other designated villains. They are also likely to target the FBI, the Department of Justice and anyone else seeking to investigate Donald Trump and his co-conspirators for their attempted coup against democracy.

Republicans also intend to undermine, defund or outright eliminate Medicare and Social Security, leaving tens of millions of Americans in poverty with no reliable access to health care. They may force a government shutdown and default on federal debts, creating economic chaos and damaging the international power, prestige, and credibility of the United States. They will seek to end military and other assistance to Ukraine as it fights to resist the Russian invasion.

In total, the Republican fascists and their allies will use their legislative authority to advance a sweeping agenda aimed at ending America's multiracial democracy. Kevin McCarthy, who was finally elected as speaker of the House after 15 ballots, may seem like a hapless clown but has wholeheartedly embraced this anti-democratic agenda.

Kevin McCarthy is now the Speaker of the House and is tasked with advancing this neofascist anti-democracy agenda. Here's how Christina Cauterucci of Slate, described the spectacle of McCarthy's ascent to power, and the endless range of concessions he was forced to offer to hard-line far-right Republicans, which she classifies as "some interesting aberrations from the norm, and also plenty of nonsense."

Before the votes even began on Tuesday, which was supposed to be the first day of Congress, McCarthy had already agreed to a package of rules changes that addressed some pet concerns of the ultraconservative bloc, including a provision that would let any group of five members force a vote on ousting the speaker at any time.

By the end of the ordeal, he had caved much further: In a late-Wednesday meeting that ran into Thursday morning, McCarthy agreed to give the Freedom Caucus multiple seats on the powerful Rules Committee (which influences how legislation makes it to the floor), hold a vote on term limits for members, and allow any single member to trigger a vote to overthrow the speaker. Also, a McCarthy-aligned super PAC agreed to, essentially, a non-compete with the more hardline super PAC Club for Growth when it comes to spending in safe Republican districts for future elections. That earned McCarthy the Club's endorsement for speaker. Even after all of that, the rebel group refused to budge.

There was an ominous resonance at work here: McCarthy was finally elected speaker of the House on the two-year anniversary of Jan. 6, 2021 (more precisely the early morning hours of Saturday after voting began that Friday). That was of course the day when Republicans in Congress took on the task of delaying certification of the Electoral College vote long enough for Trump and his agents to find some way to nullify Joe Biden's victory. One hundred and forty-seven Republicans voted to reject legitimate electoral votes, only hours after Trump's followers had overrun the Capitol and ransacked it.

Indeed, many Republican members of Congress supported if not outright helped to plan and execute the coup attempt. None have been arrested, indicted or prosecuted by the Department of Justice or any other law enforcement agencies for their role in the insurrection. In an act of cowardice likely driven by the fear of retaliation, neither the House Jan. 6 committee nor the previous Democratic leadership in Congress have sought to hold Republican members accountable.

As Dahlia Lithwick writes, two years on from Jan. 6 "it's easy to fall prey to the idea that it was all a historical event, blessedly behind us":

It's even tempting to celebrate the dozens of ways in which the "system held." We can laud the heroics of the Capitol Police, the courage and steadiness of Nancy Pelosi, the actions of judges and state election officials who insured that specious claims of election fraud and "Stop the Steal" never garnered sufficient traction to become a legal movement with enough legitimacy to move anything more than a mob of violent racists and wackos and conspiracy theorists (and Ginni Thomas) to action….

Except, of course, the events of Jan. 6, 2021 and Jan. 3–? of 2023 are not at all unrelated. Nor are they sequential points along a continuum that is leading us to a better place. Instead, they represent the locomotive and the caboose of the same train: Each is a point along a terrifying line of governmental failure; each is a subversion of the principles of lawful transition of power. But certainly they are moving in the same direction, and there should be no joy found in watching the present and past pancaking back on itself. In many ways, the events of this week should be as frightening to us as the events of two years past, if not more so. This, too, is an insurrection. That it's coming — quite literally — from inside the House in 2023 should no more be grounds for popcorn and selfies from Democrats than the Capitol insurrection was in 2021. This is a profoundly serious systems failure, Trumpism without the relative coherence of Trump, and a triumph of nihilist anti-government fan fiction. And this go-round, those forces have a vote that is big enough to gum up the entire operation.

There is a famous quote by Grover Norquist, who has run the right-wing but innocuously named Americans for Tax Reform for decades: "My goal is to cut government in half in twenty-five years, to get it down to the size where we can drown it in the bathtub." What we have learned over the last few days is that right-wing Republican plan has outlived its usefulness, which was mostly as rhetoric anyway. This crowd wants to take the government apart, piece by piece, and kill it. They've been using and abusing the Constitution to do it. This time, they didn't even have to employ a mob to shut themselves down, and they're winning.

Contrary to the wish-casting of the American political class and news media, Trump and his movement have not been vanquished. In fact, Trump's enduring power was vividly illustrated in McCarthy's assent to power and the concessions he had to offer to fellow Republicans who seek to out-Trump Trump himself.

Kelly Rissman of Vanity Fair notes that after McCarthy's final victory he "gave new life" to Trump, although the ex-president's support did not actually bring him any more votes. "I do want to especially thank President Trump," McCarthy said. "I don't think anybody should doubt his influence. He was with me from the beginning... and he was all in. He would call me, and he would call others. And he really was — I was just talking to him tonight — helping get those final votes."

As I have argued repeatedly, it is no laughing matter that one of the country's two institutional political parties is under the control of neofascists who do not believe in democracy and are working to destroy it from within. The Republicans now appear to reject the traditional and fundamental idea of public service, according to which there should be some basic competence, seriousness and accountability in government and leadership. Such apparently obvious principles have become anathema to today's "conservative" movement.

It was "entertaining" to watch McCarthy being "ritually humiliated" by members of his own party. But it also served to normalize fascism by making the Freedom Caucus look like "outliers" or extremists.

For the most part, the mainstream media adopted two overlapping approaches to the Kevin McCarthy saga, continuing to demonstrate that even after seven years of Trump, it has willfully failed to adapt to the crisis of American democracy. One frame focuses almost entirely on political personalities, horse-race coverage, gossip and on the admittedly intriguing political drama embodied by the seemingly endless rounds of voting in which Kevin McCarthy fell short. The spectacle was deemed "historic" and "unprecedented," and delivered as a highly addictive drug into the Beltway bloodstream.

The other frame should be familiar by now: Humor, mockery, schadenfreude and popcorn emojis. It was "entertaining" to watch McCarthy being "ritually humiliated" by members of his own party. "Republicans are in disarray… and what fun!" was the general note struck over and over last week. In this default to the dangerous and obsolete habits of "normal politics," "fairness" and "balance," the mainstream news media continued to normalize Trump-era Republican by presenting the Freedom Caucus and its allies as "outliers" or "extremists" as compared to more "traditional" Republicans.

In the end, the laughter has ended, the popcorn emojis have been retired and Kevin McCarthy is speaker of the House. It all felt good for a while, presumably, but that will rapidly turn bitter as the Republican fascists return to their central task: amplifying the pain and trauma they continue to visit upon the American people and American democracy.

about Trump and the Republicans in 2023