Does it even matter who the next Speaker of the House is, if insurrectionists are running the show?

Two years after the Capitol riot, another group of right wing extremists are attempting a takeover — from within 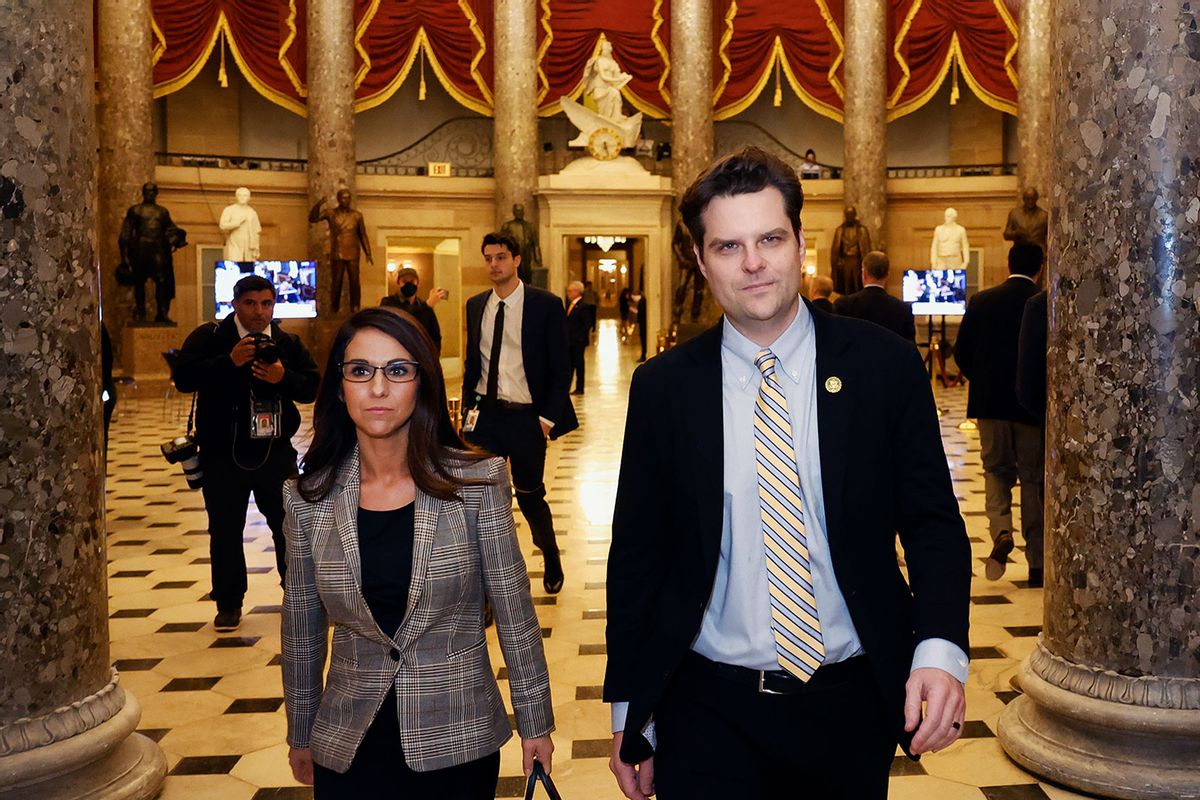 U.S. Rep.-elect Lauren Boebert (R-CO) (L) and Rep.-elect Matt Gaetz (R-FL) walk to the House Chamber during the third day of elections for Speaker of the House at the U.S. Capitol Building on January 05, 2023 in Washington, DC. (Tasos Katopodis/Getty Images)
--

Today is the second anniversary of the January 6 insurrection. On that day a group of right wing extremists breached the U.S. Capitol, declaring, "this is OUR house." They ransacked the place and attempted to hunt down Vice President Mike Pence and Speaker of the House Nancy Pelosi with the intention of staging a coup d'état. Two years later we are witnessing another group of right wing extremists attempting a takeover. This time, they're staging an insurrection against their own party by refusing to allow a new speaker to be elected unless their demands are met. And unlike two years ago, they're going to be successful.

Yesterday, Majority Leader Kevin McCarthy endured a third straight day of ritual humiliation as his party was unable to get the 218 votes needed to grant him the Speakership after 11 rounds of voting. This is the first time since 1859, on the cusp of the Civil War, that the process has taken this many votes. As Congressman-elect Jeff Jackson, D-N.C., quipped when it went to the 10th ballot, "the last time it took this many ballots to elect a Speaker, Davy Crockett had a vote."

A group of about 20 defecting members continues to vote against McCarthy, switching back and forth between alternatives and giving angry speeches about "the swamp" and McCarthy's character flaws. They're getting plenty of screen time and seem to be enjoying themselves. But they do have an agenda beyond simply stopping the hated McCarthy from becoming speaker, as much as they desire that outcome. They want to run the place.

As the NY Times laid out, most of these insurrectionists are members of the House Freedom Caucus. The majority are election deniers and all but one of the incumbents were "objectors" to the electoral vote count two years ago. Seventeen of them were endorsed by Donald Trump although they don't seem to care about his opinion since they are all ignoring his entreaties to vote for McCarthy. All but Rep. Lauren Boebert of Colorado are from very safe red districts where their voters love to see the RINO establishment take a beating, and they all have independent fund-raising capabilities through the use of right wing media.

It's been hard to pin down the specifics of what they want out of all this aside from the total mortification of Kevin McCarthy. But over the last day or so a list of demands has emerged. The one that has been touted as the most important is the requirement that only one member is necessary to move to "vacate the chair," which is essentially a call for a no-confidence vote against the Speaker. One can understand why McCarthy was reluctant to grant that under these circumstances. If he can't even get them to vote for him in the first place, it's highly likely it will be used with abandon anytime he looks at one of them sideways.

According to Robert Costa of CBS News last night, there's more. Much more. They also want a number of rules changes, budget promises and committee guarantees, making the Freedom Caucus "central" to the House.

If this deal goes thru and McCarthy become speaker, you're looking at a House where McCarthy is speaker and/but the Freedom Caucus is at the table on all big things: rules for floor, standoffs on budgets, and spreading HFC moves to key fiscal committees (approps, budget, etc.)

It's comparable as one person puts it to Boehner welcoming the Tea Party into the leadership in 2011 and making the RSC's right wing a powerful force on all tricky fiscal and spending items… others say it could tie McCarthy's hands in terms of any deals with President Biden.

That's correct. Kevin McCarthy is negotiating to turn the Speaker of the House into a ceremonial position. Surely he can keep that big office Matt Gaetz charged he's "squatting" in illegally, although if it's necessary to let Boebert have it as part of the deal, I'm sure he'll agree to that too. Nobody has ever wanted a title as much as Kevin McCarthy wants this one.

It's hard to see how the nation stays unscathed when they hold the debt ceiling hostage in order to destroy everything they can.

None of what they are giving away in this negotiation really changes anything. McCarthy isn't really giving up much of substance. As they have demonstrated this week, they already run everything. With a majority this narrow, it only takes a handful of shameless sh*t-disturbers to bring everything to a crashing halt until they get their way. And let's face it, 90 percent of the GOP caucus is more or less on board with the Freedom Caucus policy agenda. They may squabble a bit about the details but overall they're fine with it.

This Congress was always going to be a circus. We knew that going in. And when it became clear that the margin was so narrow, it also was clear they would hold their usual "oversight" spectacles without any restraint. The country can survive that, although it's a degrading exercise for everyone involved. But it's hard to see how the nation stays unscathed when they hold the debt ceiling hostage in order to destroy everything they can.

With this Speaker pageant, they're proving they will do it. And nobody, least of all Kevin McCarthy (or any other Speaker they produce) can do a damn thing about it. We went through this before in 2011 and 2013 when Republicans used the debt ceiling to prolong the recovery from the financial crisis. (You will note that they very docilely acquiesced to raising it during the Trump years.) They are ten times as volatile now.

It remains to be seen if Kevin McCarthy manages to abase himself enough to squeak through and get the ceremonial Speaker's gavel. Unless Republicans all throw up their hands and decide to vote for one of the Insurrectionist 20's obscure back bench alternatives like Florida Rep. Byron Donalds or Oklahoma Rep. Kevin Hern, it's hard to imagine anyone else wanting the job at this point.

Maybe that's the best argument McCarthy has going for him right now. He's the only one who is self-destructive enough to want it in the first place and he'll do absolutely anything to keep it. Matt Gaetz gets that and I won't be surprised if the rest of the holdouts see it too. Kevin McCarthy will make a very nice Freedom Caucus ceremonial bobblehead. Maybe they'll even let him keep his parking place.