Kevin McCarthy's GOP opponents shut down the House all week, preventing Congress from governing. What's next? 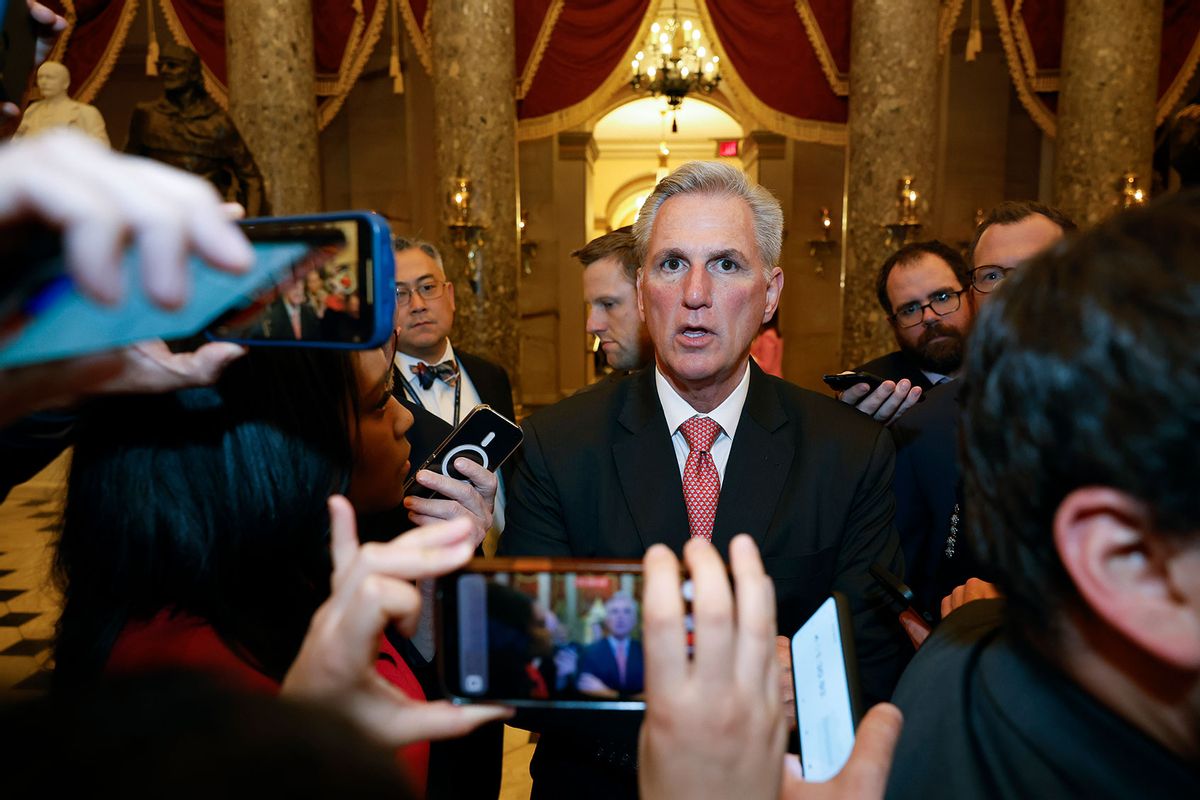 U.S. House Republican Leader Kevin McCarthy (R-CA) talks to reporters as he leaves the House Chamber during the third day of elections for Speaker of the House at the U.S. Capitol Building on January 05, 2023 in Washington, DC. (Tasos Katopodis/Getty Images)
--

They did it two years ago on Jan. 6.  They did it this week on Jan. 3. They succeeded in shutting down the government twice in two years. On Friday evening, it was still shut down after a 13th vote to elect a Speaker of the House and get the government going again. [Note: Early Saturday, Kevin McCarthy was elected Speaker of the House on the 15th vote.]

I'm talking here about the part of the government that governs, not the nuts and bolts part that does stuff like enforcing the laws and regulating the airlines and banks and issuing passports and helping people if and when they suffer the ravages of hurricanes or even manmade disasters which can include forest fires. The administrative part of the government has been shut down repeatedly in recent years — in 2013 over the Affordable Care Act, in 2018 over immigration, and again in 2018 over funding the wall. That shutdown lasted 35 days and continued into the new Congress seated on Jan. 3, 2019.

See what I mean about those shutdowns? The Congress caused them, because the Congress was in session for all three of them and had disagreements over the budget and whether it would include money for things either Republicans or Democrats didn't want funded.

But these shutdowns are different. The Capitol was shut down when it was assaulted by a mob of insurrectionists in 2021, halting the business of certifying the election of 2020. This year, the House of Representatives was effectively been put out of the business of governing for as long as it failed to elect a Speaker. This is what is meant by the word "governing." Under the Constitution, it is the job of the Congress to certify elections, and it is the job of the House to hold a vote and elect a Speaker and swear in members so it can proceed to the rest of the business of governing. Under the Constitution, Congress is the only place that can write and pass laws. It is the only place that can declare war. The House of Representatives is the only place that can levy taxes and pass budgets allocating the expenditure of those taxes in order to fund the rest of the government. When one of the houses of Congress is not in existence, governing cannot happen. For the past four days, persons who have been elected to Congress have been there in the Capitol building, but a gaggle of well-dressed persons does not a Congress make, so governing has not been happening.

The President must sign the laws passed by Congress, but unless those laws are passed, he or she has nothing to sign into existence so they can be used or enforced. So, shutting down Congress, by shutting down the House of Representatives, is a very big deal. It could be looked upon as shutting down parts of the Constitution itself. Article One establishes the Congress and gives it certain powers, including the famous "power of the purse" in Section 7: "All Bills for raising Revenue shall originate in the House of Representatives; but the Senate may propose or concur with Amendments as on other Bills."

What good is Article One if there is no House of Representatives? Without the House, that part of the Constitution has been canceled. Do you see what is going on here? The insurrectionists who got themselves elected as representatives to this putative "Congress" have for the past few days been using the Constitution against itself. Words written in that document are negated if they have no meaning. A Congress that is not in existence is not a Congress; it is merely a gathering of people in a big fancy room in a big fancy building.

The fight this week in the House of Representatives is over the Speaker election, but it's much larger than that. What it's really about is who will have the power to shut down the rest of the government, because what these people have done is what they want to be able to do more of in the future. Nearly every member who has opposed McCarthy for Speaker cast voted against certifying the election in the early hours of Jan. 7, 2021, after rioters had shut down the process on the afternoon of Jan. 6.  See if any of these names are familiar: Boebert, Gaetz, Biggs, Cloud, Good, Bishop, Gosar, Perry, Rosendale, Miller, Harris, Donalds, Norman. One of the gang opposing McCarthy, up until the 13th ballot, is Eli Crane of Arizona, a freshman just elected who has proudly attended rallies celebrating the insurrectionists who stormed the Capitol on Jan. 6.

On Friday, McCarthy was able to switch the votes of 15 members opposing him. It was reported during the four days they voted that he was able to get these members to change their votes by granting certain concessions. At least two of the concessions — allowing only one House member to make a motion to "vacate the chair," effectively firing the Speaker, and giving the insurrection caucus power over seating at least a third of the members of the powerful Rules Committee — would have the effect of making it far easier for these far-right loons to shut down the government in the future. The reasons for this are arcane but mainly involve tying the hands of the Speaker and limiting his ability to negotiate with Democrats to prevent government shutdowns or votes not to lift the debt ceiling, which amounts to the same thing.

This was never about who would become Speaker and lead a Republican caucus that doesn't want to govern anyway. The Republican Party was good enough over the last few days to treat us to speeches that revealed just what they thought the qualifications were to hold the Speakership. "He's a good family man," was one. "He worked hard to get here," was another. "He is living the American dream," was particularly revealing. I mean, with those qualities, who didn't qualify? I guess you could say being a female would be disqualifying, since "he" is the operative pronoun in each qualification.

But you get my meaning. Whether McCarthy would be elected Speaker has been the question, but it's never been the issue, the lack of any Republican alternative being obvious proof. The issue has always been who will hold the power in the Republican-led 118th Congress, and that's not going to be McCarthy under the conditions he has agreed to. At this point, he has sold off so many parts of himself, not to mention his Constitutional powers, that all he amounts to is a torso and a head without its contents — meaning, of course, a brain.

There is a famous quote by Grover Norquist, who has run the right-wing but innocuously named Americans for Tax Reform for decades: "My goal is to cut government in half in twenty-five years, to get it down to the size where we can drown it in the bathtub." What we have learned over the last few days is that right-wing Republican plan has outlived its usefulness, which was mostly as rhetoric anyway. This crowd wants to take the government apart, piece by piece, and kill it. They've been using and abusing the Constitution to do it. This time, they didn't even have to employ a mob to shut themselves down, and they're winning.