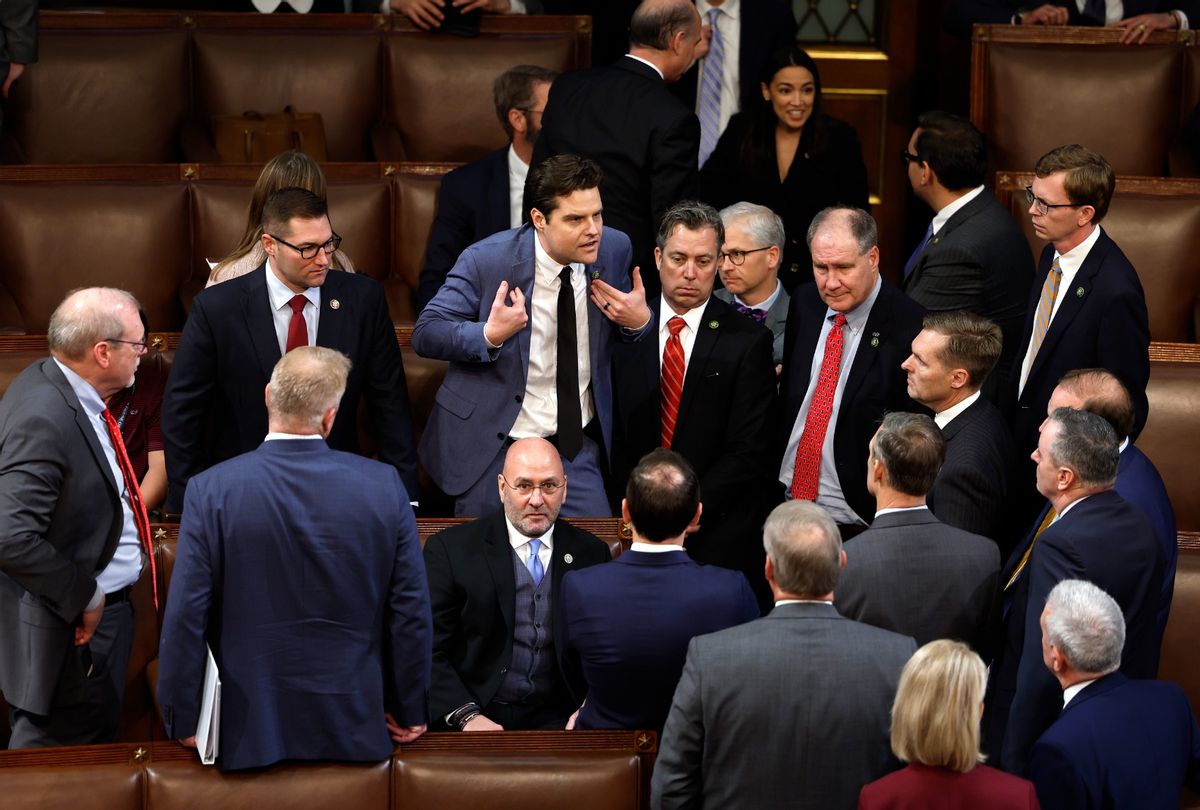 Rep.-elect Matt Gaetz (R-FL) talks to fellow members-elect during the second day of elections for Speaker of the House at the U.S. Capitol Building on January 04, 2023 in Washington, DC. (Anna Moneymaker/Getty Images)
--

On Wednesday, the television split screen showed two contrasting pictures of today's American government. One showed a legislative branch in disarray, the other offered an image of legislative-executive cooperation in the public interest.

On one side was Kevin McCarthy losing another vote for House speaker and being held hostage by a cabal of election-denying MAGA Republicans.

But they were also holding the House of Representatives hostage.

The potential rise of an American dictator is no longer a far-fetched notion. A weakened Congress could easily contribute to an end to our democracy.

On the other side, President Joe Biden and Republican Senate Leader Mitch McConnell in Covington, Kentucky celebrating the American Infrastructure Act – bridge building across the Ohio River and across the partisan divide.

It was more than a picture of contrasts between the internecine House warfare and White House-Senate bipartisanship. The Biden-McConnell message was that the American government is not failing even as one part is flailing.

Let's be clear: We haven't forgotten McConnell's role in bringing dysfunction to Washington, D.C. An occasional foray into rational, public spirited legislation does not wash away that past.

But in history's context, the message that government can deliver for the American people is more important than we may realize. More on that in a moment.

It was obvious that the Biden-McConnell meeting was pure symbolism. There was no real event to celebrate, no ribbon-cutting on the new bridge to be built across the Ohio River and paid for by Biden's 2022 infrastructure bill.

The president told us exactly what he wanted people to take away from the round of appearances and handshakes with McConnell and other prominent Republicans. The speaker-selection debacle, Biden said,  "was not a good look" to "the rest of the world." His focus was on "getting things done."

That message was needed, even if for Biden it was nothing new.

We can feel it in the underlying reasons why one of our two major parties is in not interested in governing.

First, there is Trumpism, the unleashing of the pursuit of power for its own sake. That has given the green light to factions like the 20 fringe-right "rebels" who seek to enhance their own standing at the cost of party unity and discipline. For them, a spot on Fox News is much more important than doing the hard work of actually legislating.

Second is rampant partisan gerrymandering. It has fueled extremism by segregating one party's voters into Rorschach test-shaped Congressional districts, leaving the remaining districts filled with supermajorities of the other party. That results in representatives accountable for reelection only to one side of the political divide, and free to test the limits of extremism.

There are more, of course. But the cumulative effect is a country in the grips of institutional turmoil. We see it in a House unable for the first time in 100 years to immediately select a Speaker. And even when a Speaker is selected, we will continue to see dysfunction in this Congress' inability to adopt legislation to help ordinary Americans and in the coming crisis over raising the debt ceiling, with potentially disastrous effects on the world economy and on kitchen tables across the country.

Citizens will throw up their hands in disgust at a Congress that will at best, be lame and at worst, a crippler of the country.

Which brings us back to history. The framers of our Constitution learned from England's political past the importance of a strong legislature as a bulwark against the unconstrained power of a king.

In the tension between two strong branches, the framers understood, lies both freedom and stability for a citizenry. As James Madison wrote, "It is evident that each department should have a will of its own."

The Constitution envisions a system in which curbs on each branch's power plus shared authority would require cooperation for government to be effective and for elected leaders to maintain public support.

The danger arises when one side or the other fails. When that occurs, the desire for stability can result in citizens looking to an alternative source of power for order and forward movement.

That happened, as Yale historian Timothy Snyder reminded an MSNBC audience yesterday, in 1930-1932 Germany. The Weimar Republic's parliament could not achieve a sustained majority. Government by emergency decree followed until a group of conservative politicians supported the naming of a populist leader in the hope of achieving stability and their own interest in conservative rule.

That did not work out well for Germany or the world.

Biden and McConnell may not have had that lesson in mind when they met on the banks of the Ohio River. Still, they both understand the importance of a working Congress to a functioning government and to our freedom.

The potential rise of an American dictator is no longer a far-fetched notion. A weakened Congress could easily contribute to an end to our democracy.

And so, amidst House dysfunction, the scene of the president with his rival party's Senate leader provided important reassurance.

In January 2021, David Brooks correctly predicted: "The salient divisions in the Biden era . . . will be between the performers, the people who run for office to get on TV, and the builders, the people who want to achieve something."

about the House speaker debacle