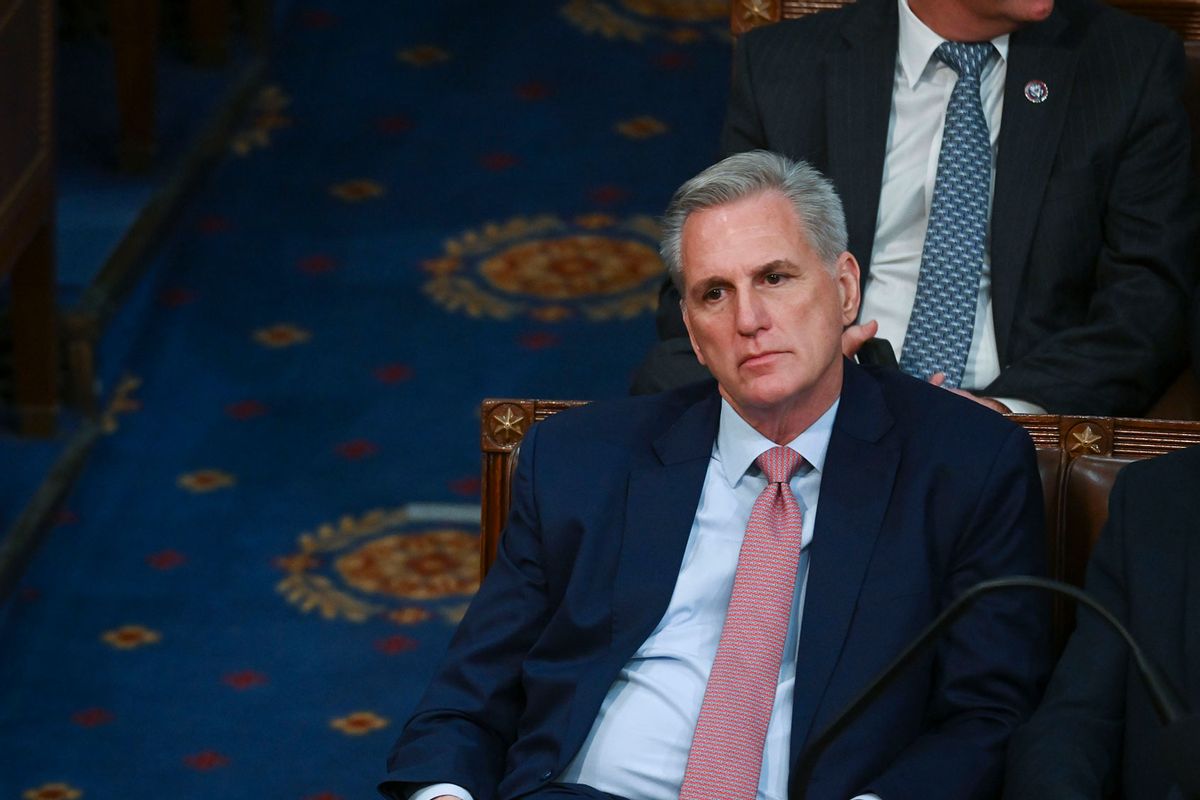 Rep. Kevin McCarthy (R-Calif.) sits in the House Chamber during the third round of votes for House Speaker on the opening day of the 118th Congress on Tuesday, January 3, 2023, at the U.S. Capitol in Washington DC. (Matt McClain/The Washington Post via Getty Images)
--

After losing six brutal rounds of votes, the prospects of winning House speakership seemed all but dead for House Republican leader Kevin McCarthy. But amid negotiations between GOP leadership and MAGA holdouts on Wednesday, a Republican super PAC and a conservative nonprofit brokered a deal that may boost the California Republican's chances of securing the 218 votes he needs to lead the chamber.

The Congressional Leadership Fund, a McCarthy-linked PAC, and the Club for Growth, the nonprofit behind McCarthy's hard-right detractors, have been at odds over the speaker nomination and a litany of issues. The CFG doesn't want the CLF to primary any of its preferred Republican incumbents. The CFG's other demands included putting more hard-right lawmakers into leadership posts, and offering line-item votes on spending bills.

The CLF agreed, announcing it wouldn't spend money in any open-seat primaries in safely Republican districts, nor funnel money to other super PACs for that purpose.

In a Wednesday night statement from both groups, CLF President Dan Conston gave his nod.

"CLF has never spent a dollar against a Republican incumbent before and obviously will continue that policy in the future," Conston said. "CLF will continue to support incumbents in primaries as well as challengers in districts that affect the Majority, which proved to be critical to winning the Majority in 2022."

McCarthy crowed to reporters in a moment captured by Fox News' Chad Pergram.

"You know what I saw on TV today? 'Oh, this has to be a day that Kevin gets movement.' So let's measure it: You've got the Club for Growth. You see that? Is that movement in your view?," he said.

The pact accompanies a handful of other late-night concessions of the McCarthy camp to the House's right-wing GOP faction.

The latest offers include adding two Freedom Caucus members to the powerful House Rules Committee (with hints at a third spot for a non-caucus conservative), allowing line-item votes in budget bills, holding a vote on constitutional term limits, and allowing any single House member to call for a vote to oust the speaker. The latter is down from the previously offered five-member motion requirement.

The suite of concessions is the second offering laid at the feet of the 20-or-so members who've so far stymied the majority leader's every bid for speaker. The first concessions came at the start of the week, when the McCarthy camp unveiled the proposed new House Rules package. One jaw-dropping inclusion grabbed headlines by proposing the near-total gutting of the chamber's non-partisan ethics watchdog, the Office of Congressional Ethics.

In exchange, the CFG agreed to ding the annual scorecards of any House member who voted against McCarthy.

"This agreement on super PAC's fulfills a major concern we have pressed for," CFG President David McIntosh said in the joint statement. "We understand that Leader McCarthy and Members are working on a rules agreement that will meet the principles we have set out previously. Assuming these principles are met, Club for Growth will support Kevin McCarthy for Speaker."

"That's really not in the spirit of the code of conduct for members of Congress. And so that is something that they should be more ethical about what they are doing," she said.

"It is creepy that dark money super pacs are explicitly part of the negotiation regarding who becomes Speaker of the United States House," he said in a Wednesday tweet.

The New York Times' Ken Vogel also raised questions about the "backroom deal," noting it may run afoul of super PAC coordination rules since "it was intended to influence particular (albeit still unspecified) congressional races" and "likely required sign-off" from McCarthy or his team.

The CLF and CFG denied any illicit coordination in a perfunctory footnote of their statement: "No one in Congress or their staff has directed or suggested CLF take any action here."