Denzel Washington puts the fascism back in football. 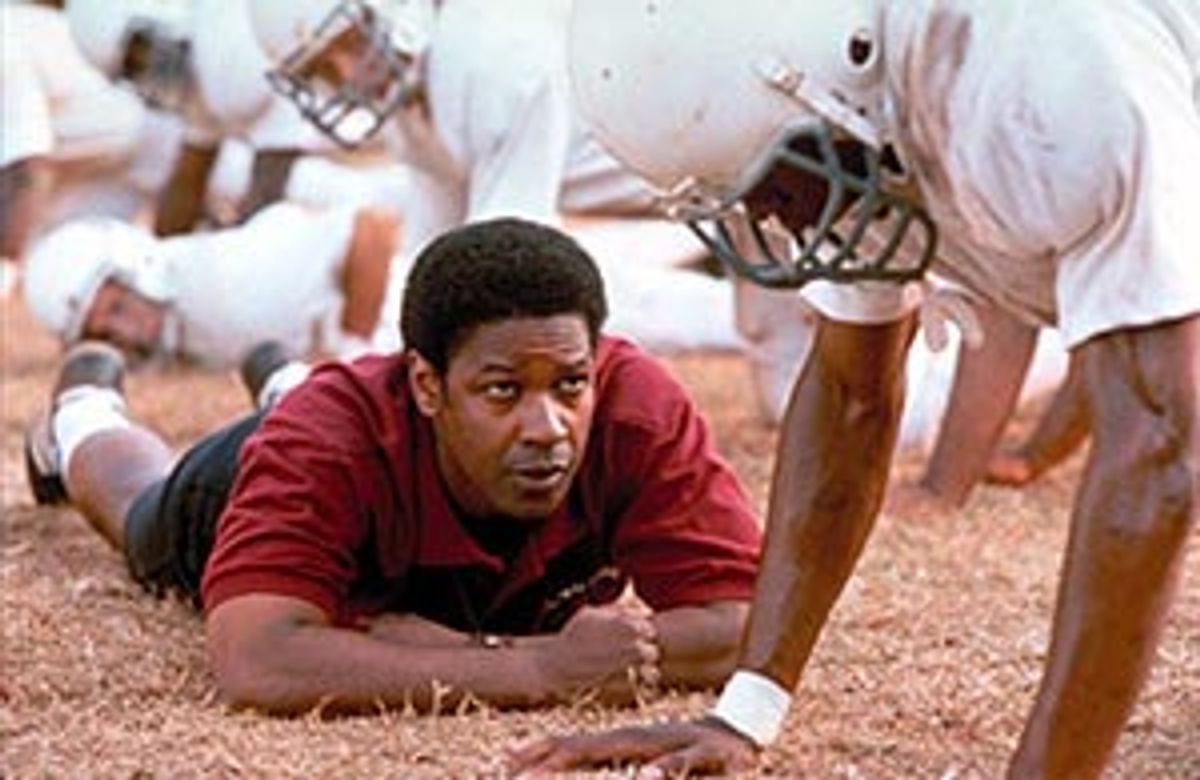 An operatic tale of high school football, racial integration and young men's passions, "Remember the Titans" is a Hollywood movie Sen. Joseph Lieberman could love (and probably will). Taken on its own terms, it's an agreeable entertainment, solidly crafted, wonderfully acted and often genuinely moving. Its timing couldn't be better; it carries a PG rating made to order for the film industry's new era of self-discipline, so there's nary a cuss word or a naked babe in sight. That doesn't mean the movie is free of sex or violence, mind you, only that they're under the furniture where you can't quite see them. Beneath its veneer of wholesomeness, "Remember the Titans" is a weird film about a weird sport and a weird country.

On the surface, this is the same inspirational saga seen in dozens of sports movies, with a mild dose of racial tension from "In the Heat of the Night" or "Mississippi Burning" mixed in. Gregory Allen Howard's screenplay is largely based on real people and real events: It's 1971, and the population of Alexandria, Va., is deeply divided over the newly integrated high school. In an abrupt spasm of affirmative action, the football team is taken away from longtime coach Bill Yoast (Will Patton) and handed over to Herman Boone (Denzel Washington), a black coach from out of state who has just been hired as an assistant.

Yoast eventually persuades himself to stay on as an assistant -- partly to protect the white players -- and the inevitable subplots develop. The team's charismatic white and black stars, Gerry Bertier (Ryan Hurst) and Julius Campbell (Wood Harris), forge a passionate friendship out of their initial mutual contempt. (In most movies this would be the romantic subplot with a tragic ending, and it pretty much is in this case too.) A pretty-boy California quarterback (Kip Pardue) and a humongous white-trash lineman (Ethan Suplee) show up to provide comic relief. A sensitive black player (Donald Faison of "Clueless") is hounded by Boone but nurtured by Yoast at a key moment in the team's evolution. Even the two coaches' irritatingly cute daughters become friends.

Of course we know exactly where this story is going, just as Athenian audiences understood why Oedipus dug his new wife so much long before the play started. Whether or not it's true that the remarkable season the T.C. Williams Titans had under Coach Boone in 1971 saved Alexandria from white flight and racial violence really isn't relevant. Believing that such things are possible, however, is a key article of our national faith. For most viewers of "Remember the Titans," the issue will not be how the movie is going to end but how Howard and director Boaz Yakin will get us there. For the most part, it's a colorful, eventful ride, just bumpy enough so it seems like a real journey, told with vigorous humor and style.

This is Yakin's first big-budget Hollywood film (his previous features were "Fresh" and "A Price Above Rubies"), and I dare say it won't be his last. He gracefully balances all the individual relationships among the large and often delightful cast without losing his central focus on the tension between Boone and Yoast. By Hollywood standards, the football scenes are both exciting and realistic (see, by contrast, "The Replacements," perhaps the worst sports film ever made), but they never threaten to overwhelm the drama. While his brief scenes of race riots and interpolated Super 8 footage -- meant to establish social and historical context -- may be predictable, they provide welcome thematic and visual breaks without turning the film into period kitsch.

Washington is of course the linchpin of "Remember the Titans"; he's a commanding actor in a commanding role, and as memorable as he was in "The Hurricane," this is ultimately a better film, if not a subtler part. Coach Boone is an enigmatic hero, a self-made tyrant of tremendous pride and principle, seemingly impassive yet also easily wounded. He will surely seem familiar to anyone who grew up in integrated public schools staffed by the tough-minded, self-motivated generation of black teachers and coaches who emerged from the civil rights movement. Boone knows it's not quite fair to take Yoast's job, but is far too ambitious to refuse. He wants to coach a winning football team, and he believes that crushing his players' wills with brutal, military-style discipline is ultimately the best thing he can do for them.

You could argue that he's right. It's probably still true that sports and the military, those bastions of masculine hierarchy and discipline (even when women are allowed to participate), are the most integrated institutions in American life. Coach Boone forces the black and white players to room together at camp, sit next to each other on the bus and even learn details of one another's lives. Until each black player and each white player have spent time together, the team is forced through grueling three-a-day practices and roundly abused: "Water? You want water! Water is for cowards. Water makes you weak."

When Boone forces his lads into a deadly 3 a.m. run, Yoast begins to think his new boss has crossed the line into sadistic mania. (Well, duh. He's a football coach.) But wait, there's a plan. Boone's training camp is at Gettysburg College, and he wants his players to see the battlefield cemetery at dawn. "Fifty thousand men died on this field fighting the same battle we're fighting now," Boone intones. "If we don't come together on this hallowed ground, we'll be destroyed just like they were." You watch an actor as good as Washington read these lines, in a Hollywood movie that tries to deal with race relations in a halfway serious fashion, and you can be fooled for a minute into thinking this is meaningful. But hang on a sec; this guy is comparing the battle of Gettysburg to the internal problems of a suburban high school football team. As a motivational tool, I guess that's every bit as legitimate as drawing on speeches from "Henry V" or Zen philosophy, but as the grand analogy driving a motion picture, it's bogus to the 99th power.

Furthermore, the ideology behind this comparison, and behind this entire movie, is thoroughly confused. The Civil War was fought in the name of preserving a republic based on equality and democracy. (Let's overlook for the moment that it hasn't entirely worked out.) Herman Boone was no doubt a terrific football coach, but the lessons to be drawn from his success in Alexandria are ambiguous, and "Remember the Titans" is too wrapped up in its weepy macho sentimentality to address them clearly.

Under the guise of progressive racial politics, "Remember the Titans" suggests that we could use a full-scale, national ass kicking from somebody like Boone. (Stalin and Mussolini both focused on obliterating ethnic distinctions and enforcing a uniform national language on minority groups.) Boone's empire of racial harmony, of course, is based on a violent male-bonding ritual that systematically excludes and persecutes the weak, the feminine, the four-eyed and other pantywaist, girly-girl classes of humanity. I don't actually believe that Yakin and Howard are consciously advocating a friendly, football-coach version of fascism. But I can't help wondering if America is just about ready for it.