What you missed while watching "Ask a Ninja"

Salon watches the fourth Democratic presidential (YouTube) debate so you don't have to. 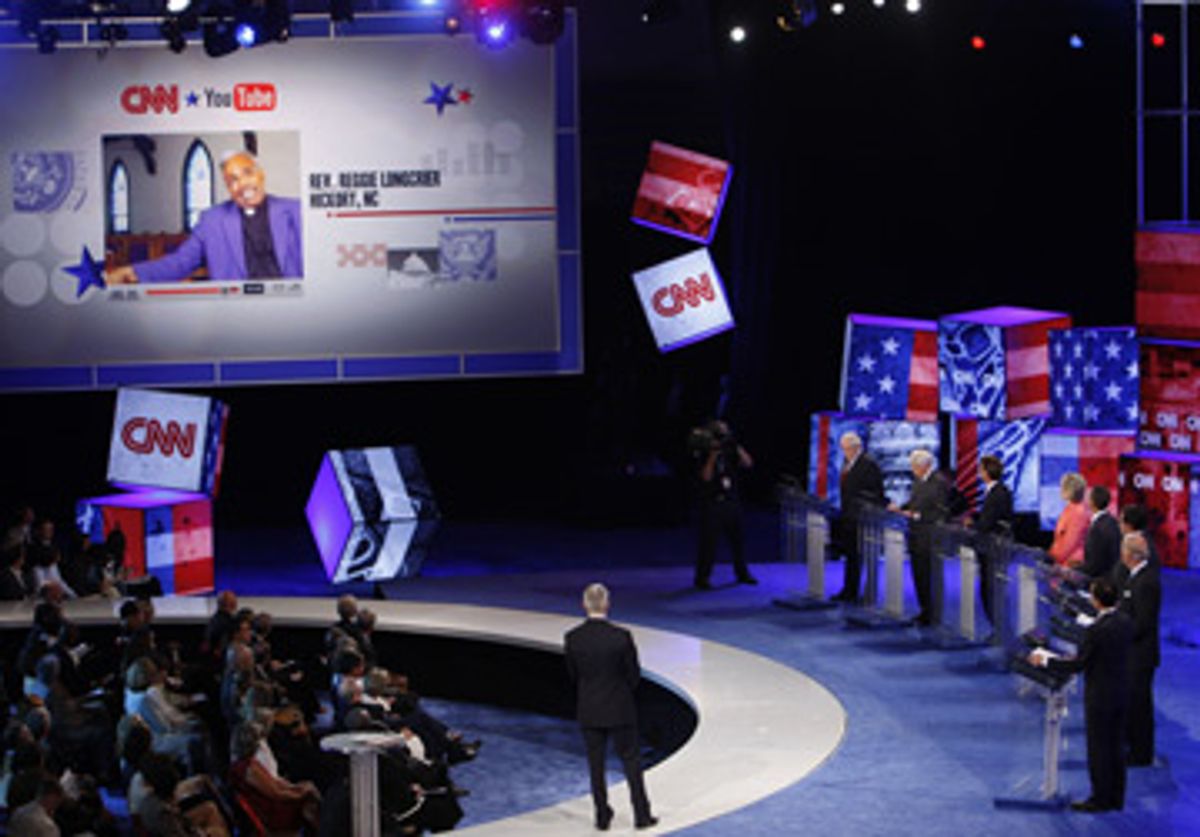 0 minutes. CNN host Anderson Cooper welcomes the candidates by admitting his anxiety. "This is something that we have never done before. What you are about to see is -- well, it's untried. We're not exactly sure how it's going to work. The candidates on the stage don't know how it's going to work either." He goes on like this for a while. The questions will be asked by normal people over Web video, not by journalists. Democrats will be logging on to the internetting, surfing the series of tubes. Anything can happen.

2 minutes. To demonstrate the danger, Cooper shows some of the 3,000 video questions submitted via wide world web space. There are videos of a singing chicken lady, a kid with giraffes and flamingos, a screaming toddler. There is a guy who says Arnold Schwarzenegger is a cyborg who can stop nuclear war. Cooper tries to calm the viewing audience. "We all know that Arnold Schwarzenegger is a cyborg," Cooper says, "so there is no need to waste time actually asking the candidates that question." Huge relief.

5 minutes. Finally, the debate gets going. The first question comes from a guy named Zach in Utah. "What's up?" virtual Zach says, before asking a good question. He essentially wants to know if any of the Democratic candidates will be any different from all the other pinhead politicians in Washington. "What's going to make you any more effectual, beyond all the platitudes and the stuff we're used to hearing?"

6 minutes. Sen. Chris Dodd, D-Conn., answers by reciting the empty platitudes we are used to hearing. "While hope and confidence and optimism are clearly very important, I think experience matters a great deal -- the experience people bring to their candidacy, the ideas, the bold ideas that they've championed over the years." Why not bring back the chicken lady? What about the screaming child? How do cyborgs stop nuclear war, anyway?

7 minutes. It's platitude roll-call time. "People have an urgent desire for change in Washington," says Sen. Barack Obama, D-Ill. "We are united for change," says Sen. Hillary Clinton, D-N.Y. Only Rep. Dennis Kucinich, D-Ohio, mixes it up. His platitudes sound like Buddhist koans. "Strength through peace," he says. "The science of human relations."

11 minutes. A guy named Rob from Irvine, Calif., asks Clinton if she would call herself "liberal." She answers with an eloquent and concise history of the word, from its 19th century roots to the current use by conservatives as a synonym for weakness and big government. "I consider myself a modern progressive," she says.

12 minutes. Cooper turns to the malcontent standing at the right side of the stage. "Are you a liberal?" he asks. Former Sen. Mike Gravel, D-Alaska, dodges the question and decides to attack everyone else's platitudes. "We're not united," he says to Clinton. "And I want to take on Barack Obama for a minute." Gravel looks unhinged. Cooper cuts him off.

17 minutes. A guy named Will from Boston asks a question that he says is in the back of everyone's head. "You know, in some people, it's further back than others, collecting cobwebs." Should African-Americans get reparations for slavery?

18 minutes. Former Sen. John Edwards, D-N.C., says no, but then speaks movingly about how racism continues to keep people in poverty. Cooper asks if anyone on the stage supports reparations. Only Kucinich steps forward, with another puzzler. "The Bible says we shall be and must be repairers of the breach. And a breach has occurred," he says. "It's also a breach that has affected a lot of poor whites as well." Perhaps the impact was emotional.

22 minutes. New Mexico Gov. Bill Richardson finally gets asked a question. It's about Hurricane Katrina, but as he answers, his earpiece -- which he is wearing to listen to the YouTube videos -- falls out of his ear. CNN refuses to cut to another angle, apparently reveling in the possibility that Schwarzenegger is not the only governor with wires that protrude from his head. "We have to make sure that a president cares," Richardson says.

35 minutes. CNN cuts to a commercial break. The debates are sponsored by Coors, the beer company that usually creates ads featuring young men who ogle underdressed women with fake breasts. But tonight Coors is taking the high road. Some guy named Andy England appears on-screen to say, "We at Coors are as committed as you are to preventing underage drinking." Apparently, Andy has low expectations of the American public.

39 minutes. We're back. Richardson has fixed his earpiece. Gravel still looks ready to explode. Clinton appears youthful and vibrant in her pink jacket. Obama stands straight-backed. Edwards has been growing out his hair. It hangs over his forehead like a light and fluffy pancake. The message: See what happens when I don't get expensive haircuts?

48 minutes. Another YouTube question: "I would like to know if the perception is true that the Democrats are putting politics before conscience," says the mother of an American soldier in Iraq. "How many more soldiers must die while these political games continue in our government?"

49 minutes. Clinton explains how difficult it is for Democrats in Congress to force the president's hand on Iraq. Then Kucinich comes in blazing. "The answer to your question, ma'am, is: Yes, it is politics," he says. Then to prove that he is above politics he pulls out a cellphone and tells everyone to send a text message to the word P-E-A-C-E, or 73223, so his campaign can send messages back.

67 minutes. Richardson attacks "the senators" on the stage for wanting to leave any troops in Iraq. He wants to get all the troops out by the end of this year, about 10 months before the election. He wants to leave no "residual forces."

68 minutes. Sen. Joe Biden, D-Del., who chairs the Foreign Relations Committee, is having none of it. "There is not a single military man in this audience who will tell this senator he can get those troops out in six months if the order goes today," he says, showing his perfect white teeth. "Let's start telling the truth." Clinton agrees with Biden. "It is time for us to admit that it's going to be complicated," she says.

72 minutes. Another commercial break. The same empty rhetoric from the good people at Coors.

87 minutes. A YouTube snowman asks a question about global warming. Kucinich is still speaking in riddles. "We have to understand the connection between global warring and global warming," he says.

100 minutes. The whole YouTube format is working. The questions are, on the whole, far more offbeat and interesting than in the other debates. Two women from Pennsylvania ask, "If you're elected to serve, would you be willing to do this service for the next four years and be paid the national minimum wage?"

101 minutes. Gravel, who recently declared bankruptcy, says, "Oh yes." Dodd says, "I have two young daughters who I'm trying to educate them. I don't think I could live on the minimum wage." Edwards, who is pretty rich, says, "Yes." So does Clinton, who is also pretty rich. Obama admits the obvious. "Well, we can afford to work for the minimum wage because most folks on this stage have a lot of money." Richardson says, "Yes." Biden, whose net worth is less than $150,000, says, "If I get a second job, I'd do it." Kucinich says, "I would but I wouldn't want to." Wouldn't it be wild if one of them is elected and has to honor these pledges?

115 minutes. Clinton says, "Any one of us would be a better president than our current president or the future Republican nominee." It is unclear whether she is including Gravel, who promptly launches into another rant. "The Democratic Party used to stand for the ordinary working man," he fumes. "But the Clintons and the DLC [Democratic Leadership Council] sold out the Democratic Party to Wall Street."

124 minutes. The final question comes from Jason in Colorado, and it is a zinger. "I would like for each of you to look at the candidate to your left and tell the audience one thing you like and one thing you dislike about that particular candidate," he says. "And remember, be honest."

125 minutes. Gravel says he likes Dodd's dad but not the bankers who fund his campaign. Dodd says he likes Edwards' wife and family and has nothing negative to say. Edwards says he admires Clinton and her husband, but says, "I'm not sure about her pink coat." Clinton laughs and threatens Edwards with a proportionate fashion advice response. "John, it's a good thing we're ending soon."

126 minutes. Clinton declines to criticize Obama, and Obama returns the favor by saying, "I actually like Hillary's jacket. I don't know what's wrong with it." He says he likes Richardson's commitment to public service, but has concerns about the governor's affection for both the Yankees and the Red Sox, but not the White Sox. Richardson says he likes Biden's commitment to public service and would make him secretary of state. Biden says to Kucinich, "I don't like a damn thing about him." But he is only kidding. "The best thing I like about you is your wife," Biden says, and the CNN cameras cut to a quick shot of Kucinich's young, tall, poised wife in the crowd. She is smiling.

127 minutes. Kucinich realizes there is no one on his left, and blames CNN. "They didn't put anybody to the left of me. Think about it," he says. Cooper can't help himself. "I'm not sure it would be possible to find anybody," he quips. Everyone laughs. The crowd applauds.

128 minutes. The fourth Democratic presidential debate comes to a close. It has all gone well. The intertubes held up their side of the bargain. Journalists will never outshine the whole of America when it comes to figuring out good questions. "All right," says Cooper. "We'll leave it at that."