You, too, can be a campaign reporter!

Up to speed on Dennis Kucinich's UFO encounters? Know which candidate is Dick Cheney's cousin? Test your '08 savvy here. 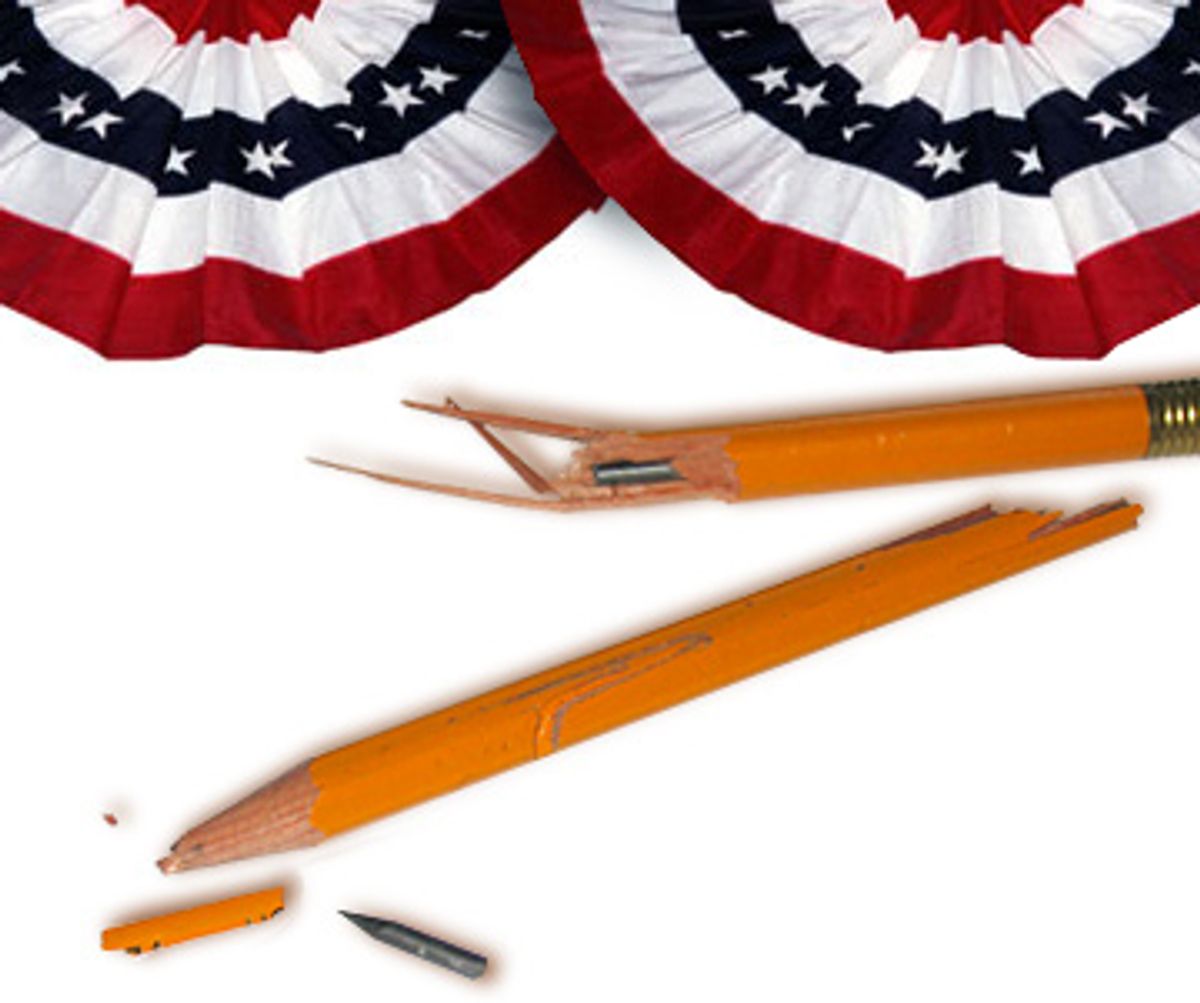 We, the campaign press corps, need help. We can't do it alone. The campaign season is just too long, too exhausting. It has already been a year of diner food and Iowa sunsets, motel room breakfasts and three-hour bus rides at dawn. Our children don't recognize us. Our husbands and wives won't look us in the eye. Our boyfriends and girlfriends have moved on.

So you must take this test, the second installment of the ACTAT -- Advanced Campaign Trail Aptitude Test. You must score well. Our very democracy depends upon it. If you get a perfect score, you can quit your job and join the circus. We will give up our seats on the bus.* We will join a yoga class, read poetry and talk about our feelings more.

As before, the test is hard. Number a piece of paper 1 to 30. The answers are available on Page 3. If you get every question right, you can have my job.*

1. When prompted by a young voter in Exeter, N.H., Rudy Giuliani promised to keep America safe from what obscure threat?

2. According to the Politico, an aide to Mitt Romney used the following prop at a recent campaign meeting:

3. The eastern Nevada field director of what presidential candidate resigned after it was discovered that he had been investigated for shorting prostitutes their pay at Mona's Ranch, a legal brothel in Elko?

4. According to his memoir, Bernie Kerik underwent what mafia-like ritual when Rudy Giuliani promoted him to deputy corrections commissioner of New York?

5. After her campaign aide was caught planting a question in the audience of a town hall event, Hillary Clinton explained the deception this way.

Match each of the following passages of canonical campaign reportage to its author:

6. "Campaign journalism is, by definition, pack journalism; to follow a candidate, you must join a pack of other reporters; even the most independent journalist cannot completely escape the pressures of the pack."

7. "Bristling with filial tension and nurturing the chip on his privileged shoulder, the son refuses to follow in the proper father's footsteps and instead engages in, as John Updike put it, 'impulsive bellicosity,' falling into a self-destructive spiral that starts when he throws a drink into an ally's face at the club."

8. "Politics, in a sense, has always been a con game. The American voter, insisting upon his belief in a higher order, clings to his religion, which promises another, better life; and defends passionately the illusion that the men he chooses to lead him are of a finer nature than he."

9. "So George Bush is coming to the Astrodome. Disaster in the making. The thing is, it couldn't just happen. George Bush couldn't just fly in, catch a cab to the ballpark, get his ticket torn, and grab a beer on the way to his seat. No, he'd come too far for that."

11. Name the Republican presidential candidate who has not had a prominent supporter accused in the last year of either cocaine trafficking or illegal sexual solicitation.

12. According to Shirley MacLaine, Dennis Kucinich had the following reaction after he had a close encounter with a triangular UFO, which hovered above him for about 10 minutes and then sped away.

13. When asked by Newsweek if he had ever baptized the dead, a controversial Mormon practice, Mitt Romney said:

14. In campaign parlance, the phrase "birddogging" is used to describe:

16. In his first televised campaign ad, Mike Huckabee made all of the following claims about Chuck Norris except:

17. Robert Novak reported that Hillary Clinton's campaign has damaging information on Barack Obama, but will not plan to release it. Novak said his source for this story was:

18. At this time of year in 2003, a Pew survey of Iowa Democrats and Independents asked which Democrat had "the best chance of defeating George W. Bush" in a general election. Which of the following is true about the results?

19. According to the New Republic, Fred Thompson met his current wife, Jeri, who is 24 years younger, in 1996, while:

Match the candidate to his campaign trail joke.

20. "In case you missed it, a few days ago Sen. Clinton tried to spend $1 million on the Woodstock Concert Museum. Now my friends, I wasn't there. I am sure it was a cultural and pharmaceutical event. I was tied up at the time."

21. "It doesn't help that you put my cousin, Dick Cheney, in charge of energy policy. I've been trying to hide this for a long time. Everyone has a black sheep in the family."

22. "The best way to describe my childhood is that the only soap that we had in our house when I was a kid was Lava soap. What that really means is that I was in college before I found out that it's not supposed to hurt when you take a shower."

23. "I've got a good liberal Democrat in the state of Washington named David Nierenberg and I set him up to be a surrogate for me in Alaska and he went up and spoke up there. But on Saturday, he attended services there in Anchorage. I said, 'How was it?' He said, 'They call the place the "synagogue of the frozen chosen."'"

25. Which of the following is not a "microtrend" demographic group listed in the table of contents to the new book by Mark Penn, the pollster for Hillary Clinton?

26. Which one of the following things has Bill Clinton said while introducing his wife on the trail?

27. According to Newsweek, Rudy Giuliani's homeroom teacher in grade school once "gave him a whack" for talking in class. Giuliani's parents responded by:

28. The Iowa Caucus will be held on Thursday, Jan. 3, the same night as the Orange Bowl. New Hampshire is set to have the first-in-the-nation primary on what date?

29. Mitt Romney is worth upward of $200 million. According to campaign finance law, he can contribute how much to his own campaign in the 60 days before the Iowa Caucus?

30. A group called "Foundation for a Secure and Prosperous America" has been running ads in South Carolina that praise John McCain. The group is led by a former McCain advisor, and refuses to disclose its donors. The candidate's response to the ads was:

Answers are on Page 3.

Here's how to score your answers:

0-10 correct. Greenhorn. Give it a few years. You are not yet ready for the trail.

11-20 correct. There's potential. Come out to Des Moines. You can drink at Centro.