Is the Internet eroding America's Puritanism -- or making it worse?

Beneath the gawking, the online reaction to the Spitzer and Paterson revelations shows that Americans are wary of passing judgment on private sins. 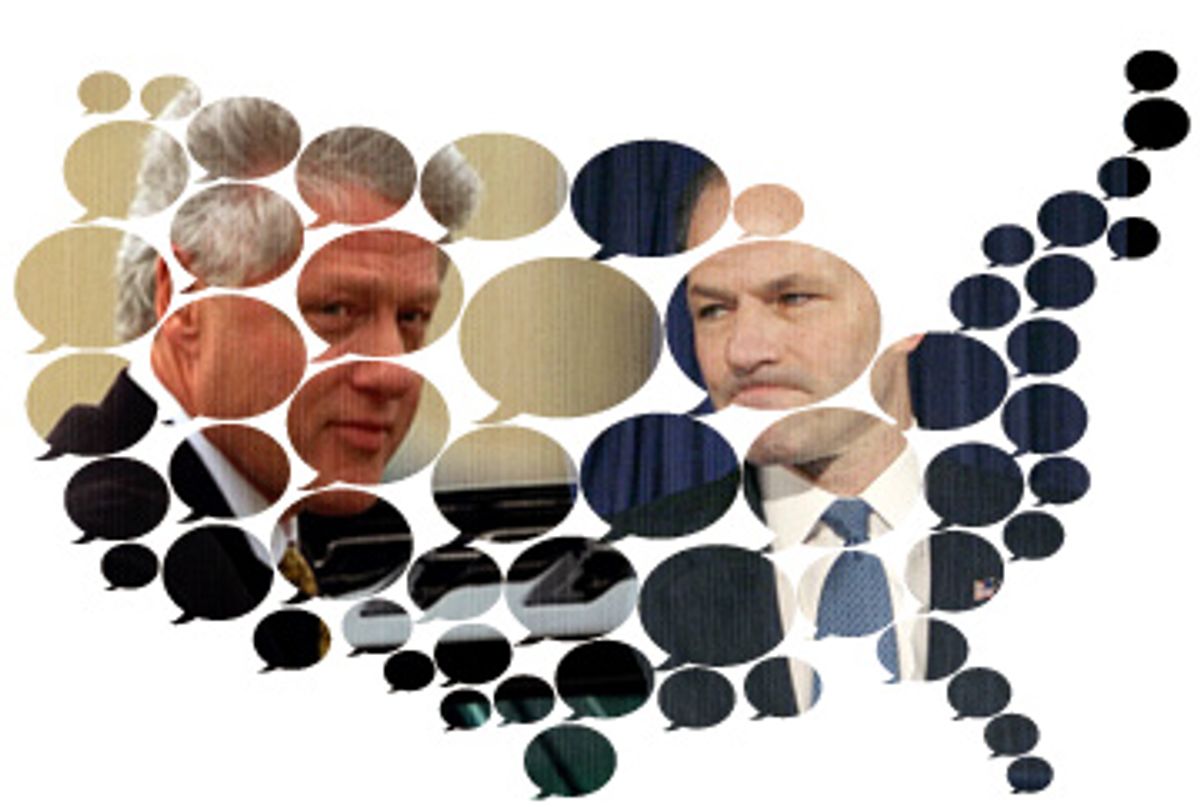 America seems to be slowly but surely weaning itself from its addiction to shrill moral judgments. Only 10 years ago, former President Bill Clinton was almost removed from office because he fooled around with a White House intern. Ten years before that, Douglas Ginsburg lost his shot at the Supreme Court because he admitted he had smoked marijuana. But when New York Gov. David Paterson recently copped to having had extramarital affairs and doing cocaine, the public reaction was a collective yawn. Admittedly, Paterson chose the best possible time to make his public confession: after the Eliot Spitzer train wreck, he probably could have revealed that he had dabbled in necrophilia while high on smack and gotten away with it. But still, Paterson's get-out-of-jail-free card would have been inconceivable just a few years ago.

We'll probably never have state funerals in which the wife and mistress of the late president stand side by side at the grave, as they do in France, but the hand that once held American sinners in its angry grasp has weakened notably.

There are many reasons for the gradual erosion of American Puritanism. Consumer capitalism, which uses sex to sell everything, has loosened the old restraints. So has ubiquitous pornography, now a multibillion-dollar industry. The sheer number of sex scandals, and their instant dissemination in an age of 24/7 media saturation, has lessened their shock value and their stigma. Conservatives, by instinct, ideology and upbringing the most fervent believers in a strict code of moral conduct, are no more immune to the culture they live in than anyone else. Moreover, they have had to come to terms with the adultery and/or drug use of many of their heroes, and their need to accommodate or excuse this behavior has let the hot air out of their outrage balloon. Even right-wing icons like Rush Limbaugh have been forced to become everybody-does-it relativists. When George W. Bush, icon of the moralistic right, all but admitted he smoked dope and did a few lines in his "young and foolish" days, he probably did more to end America's drug hysteria than a thousand policy papers.

The Internet, too, has undermined American Puritanism. This may seem counterintuitive: After all, the Internet has greatly exacerbated our society's sensationalist, voyeurist and exhibitionist tendencies. The smallest public sin is instantly discussed by millions of people. But this mass orgy of ogling and gossiping conceals the fact that Americans are no longer as judgmental as they once were. Indeed, it may even be part of the reason they aren't. And because the Internet functions as a giant national feedback loop, in which the opinions of countless people are thrown out into the world and then recirculated through the body politic, changes in the Internet zeitgeist become self-reinforcing.

The majority of Internet posters and bloggers are simply not particularly exercised about the flesh-is-weak sins committed by public figures. The coverup is worse than the crime: Hypocrisy and lying are seen as hanging crimes, but not adultery or recreational drug use. That's why Spitzer went down while Paterson skated. Hardcore moralists, those who issue unqualified, black-and-white condemnations of personal foibles, are greatly outnumbered online. I don't have any empirical evidence of this, but judging from years of reading readers' letters, discussion threads and blogs, it seems true to me.

Online discussions and posts are notoriously judgmental, argumentative and ad hominem, to be sure. But they tend not to be based on traditional notions of "sin." The number of posters and bloggers who flatly condemn public figures, or even private ones, simply for having engaged in sexual indiscretions or using recreational drugs is relatively low. And that holds true even on right-wing sites like Free Republic.

Political differences, not a belief in absolute right and wrong, are what drive ad hominem online attacks on public figures. Liberal bloggers rage against Newt Gingrich for pursuing a divorce while his wife was in the hospital with cancer, conservative bloggers cackle with glee over the fall of Eliot Spitzer, but the spleen of both is usually driven more by partisanship than a transcendental moral code.

The true home of unabashed moralizing isn't the Internet but the "elite" media -- the pundits and gatekeepers. In 2003, the conservative New York Times columnist David Brooks wrote that "anybody who has several sexual partners in a year is committing spiritual suicide" (effectively announcing, as New York magazine media critic Michael Wolff pointed out, "the metaphysical demise of, one might guess, a good percentage of Times readers as well as the city itself"). But down where the unwashed masses mix it up, these lofty utterances are as rare as a pince-nez in a barroom.

Moralistic harangues and instant, omniscient moral judgments certainly exist online. Anyone who has read readers' letters to Salon's Broadsheet, or Cary Tennis' advice column, for example, is only too well aware that there are large numbers of readers whose lives seem driven by the need to utter sweeping condemnations of total strangers. But the savagery of their judgments is directly proportional to the degree to which the offending writer, almost always a private individual, goes into intimate, confessional detail about his or her transgressions. The sketchier, more abstract sins of public figures draw much less ire -- again, except insofar as they serve a partisan agenda.

At ground level, where ordinary Americans live, all-too-human sins like cheating and getting high are just not nearly as stigmatized as they once were. (It's even possible that maybe they never were as stigmatized as commonly believed -- the Internet has given us a far more detailed and panoramic snapshot of Americans' beliefs and values than we ever had before.) Conservatives from William Bennett to Gertrude Himmelfarb lament the "death of outrage," blaming it on liberal elites and morally relativist college professors. But the Internet shows that most Americans have arrived at a pragmatic morality all by themselves.

Much of this reflects the inevitable gap between the traditional media's condemnation of illegal or stigmatized acts and the attitudes -- and practices -- of ordinary Americans. The most obvious example is marijuana use, but to a lesser degree sexual indiscretions also fall into this category. Beneath the noise, the tantrums and the excommunications, there's a lot of common sense and moral modesty out there.

And the Internet not only reflects a less censorious America but is also helping to create it. Sooner or later, the traditional media will have to come to terms with the fact that much of its audience doesn't believe what the media thought it did. And since the media is driven by the unspoken, perhaps unconscious, desire to reflect a national consensus (or, more arrogantly, to create one), this change will be reflected in changed coverage.

Individual Americans are also affected by the national mirror held up by the Internet. Like the media's, individual judgment is based in part on deference to collective judgment, what we take to be a commonly held code of beliefs. And if Americans come to believe that that code is much more relativistic than they had previously believed, then they themselves will adjust their beliefs. By a considerable irony, good old gray-flannel-suit conformism could nudge America toward liberal tolerance.

Some may object that this view is Panglossian. The Internet may reflect our more nuanced views, but it also notoriously amplifies everything around it. And since our mass-media culture is driven by sensationalism, sex, scandals, judgment, punishment and redemption -- things that boost ratings, sell newspapers and increase page views -- the Internet can be seen as exacerbating Puritanism, not diminishing it. Even if people who are blogging about sex scandals dismiss them, they're still blogging about them. Shame is down, redemption is devalued, but cheesy noise is up. Does this really constitute progress? Can the Internet really act as a brake on the spectacular and superficial tendencies of our culture when in so many ways it is the biggest engine of those tendencies?

Call me a hopeless believer in the power of online democracy, but I think it can. Perhaps because I have learned so much from my readers, I am optimistic enough to believe that the infinitely democratic Internet is contributing to our national self-knowledge, and that in the end self-knowledge, however unruly and noisy, is a good thing.

And since this is the Internet, I can ask what those newly empowered readers what they think. The great feedback loop may or may not work at a national level, but it's open here.