The punditocracy's Seven Biggest Blunders of the 2008 election

Guess what? The Conventional Wisdom has blown it again in handicapping Obama vs. McCain in the homestretch. 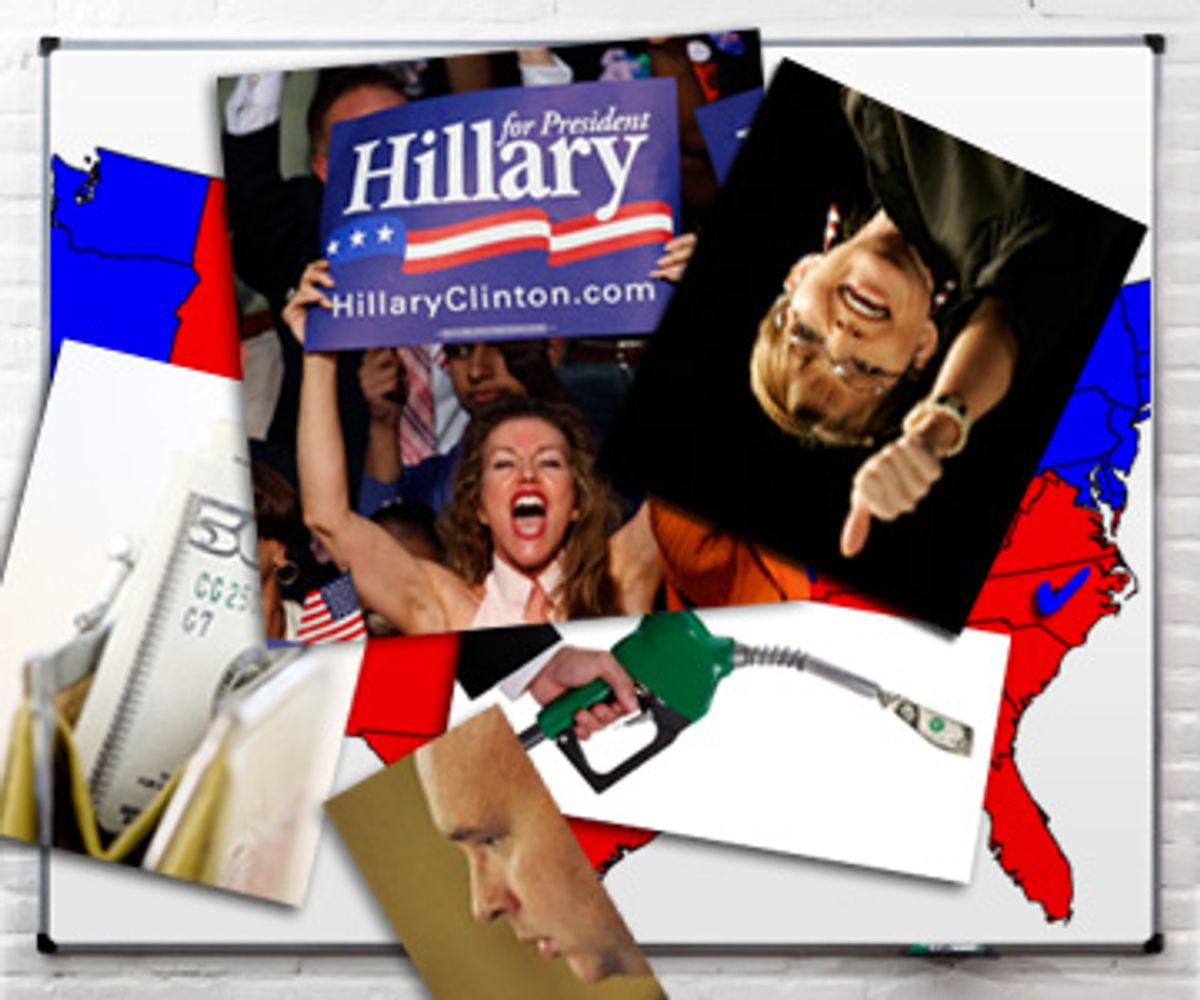 This has been a campaign season when the conventional wisdom has fared about as well as Bob Barr's prospects for moving into the Oval Office.

During the primaries, the political prediction business -- all those glib quasi-certainties spouted by TV talking heads and embedded in the opening paragraphs of newspaper and magazine articles -- gave us such fantasies as Rudy Giuliani masquerading as a serious presidential candidate and mistakenly consigned John McCain to the GOP dust heap. Remember when Hillary Clinton was prematurely anointed as the nominee or the dire warnings that a protracted Clinton-Obama primary fight would, in a typical burst of Democratic self-destructiveness, cost the party the White House?

Of course, that was all long ago and everyone involved in these bum calls has been sent to their rooms without supper. But what about the errors of the last two months -- the equally fallacious theories about the fall campaign that have been the stuff of Sunday morning round tables and newspaper Op-Ed pages? Granted, we at Salon have sometimes stumbled on the road to omniscience. But that shared sense of humility does not dampen our glee in pointing out the punditocracy's Seven Biggest Blunders, homestretch edition.

1) The Cult of Sarah Palin

McCain's choice of a running mate on the eve of the Republican National Convention set off a wave of emotions that quickly veered from "Sarah Who?" to "Sarah Wow!" Even amid the initial gooey-eyed gush, there were dangerous signs that the McCain team had done a sloppy job in researching her background. But the boffo convention speech, the giddy poll numbers and Palin's rock-star crowds gave rise to half-baked theories about the veep pick's ability to transform the presidential race and even snare a chunk of the feminist vote. After the disastrous Charlie Gibson and Katie Couric interviews, however, the Palin pick seemed less a moose-hunter's delight and more like stale (Dan) Quayle. A Pew Research Center national poll released this week found that 49 percent of voters now hold negative opinions about Palin, compared to 32 percent voting thumbs down in mid-September. The Pew survey discovered that a stunning 60 percent of all women under the age of 50 currently have negative feelings about Palin.

2) Steve Schmidt Is a Genius

When McCain took the lead after the GOP convention in many national polls, the immediate reaction was to lionize top strategist Steve Schmidt for imposing order and discipline on the unruly campaign. But, in truth, Schmidt's ascension probably only intensified a problem that has dogged McCain from the outset -- a focus on day-to-day tactics over long-term strategy and a coherent rationale for the campaign. McCain often dominated the daily news cycle, but failed to dominate the hearts and minds of voters. Many in the Obama campaign believe that the turning point in the race came when McCain dramatically suspended his campaign on the eve of the first debate in order to fly to Washington to join in the ineffectual dithering over the economic crisis. Schmidt's war-room mentality (he ran the rapid-response team for the Bush-Cheney campaign in 2004) may have been ill-suited for a political year when McCain needed a Big Idea to compete with Obama.

The headline on the Aug. 20 Quinnipiac University national poll is enough to prompt instant nostalgia: "Gas Prices Gaining As Americans' Biggest Worry." Brooding about a $100 fill-up seems so overwrought two months later with a financial system in tatters. Who would have ever guessed back then that oil prices would drop below $70 a barrel before Election Day. The moral, of course, is that voters choose a candidate based on what is bugging them in November, not August. The danger in political soothsaying is to blithely assume that external events will not reshape the political landscape before Election Day. Things always happen, though rarely as dramatically as September's Wall Street whirlpool.

4) Obama Should Have Taken the Money ... and Run

Obama could have received a check from the federal government for $84 million as soon as he officially accepted the nomination. That is what McCain did in accepting public financing -- a decision that ruled out directly raising private money for his own campaign. Obama, by contrast, gambled that he could do better on his own by becoming the first presidential candidate in modern history to spurn public financing for the fall campaign. But right after the conventions, the Obama campaign appeared to radiate a whiff of desperation on the fundraising front. Meanwhile, Republicans were gloating. Not for long, though. Obama, of course, raised a staggering $150 million in September (or about $208,000 every hour), and McCain is being badly outspent in almost every major media market. An important symbolic moment in the campaign came when word seeped out that Obama was buying ads in video games -- an epic illustration of too much money chasing too few undecided voters.

In late June in Washington, Obama campaign manager David Plouffe narrated a PowerPoint presentation for the press in which he boldly sketched out all the ruby red Republican states that the Obama campaign intended to contest. Plouffe faced a host of skeptical questions about Obama making heavy investments in Virginia and Indiana, states that the Democrats had not carried in 40 years. Over the summer, both Democrats and Republicans alike were puzzled that Obama continued to contest North Carolina, even though McCain had a hefty lead in the polls. Sure, there were a few wrong calls (Plouffe saw Alaska as "competitive" in the pre-Palin era). But Obama is now forcing McCain to devote the bulk of his dwindling resources to defending once-safe GOP states like Missouri, Indiana and North Carolina, while Virginia has moved into the leaning Obama category.

6) Down-ballot Democrats Will Flee From Obama

This was a constant trope during the primaries, and continued into the summer: Democrats, particularly in red states, would cut and run from the party's ticket faster than you could say "Barack Obama and his liberal allies." Oklahoma Rep. Dan Boren made headlines in June when he vowed not to endorse Obama; other House members from conservative districts were expected to do the same. One economic collapse later, and instead, it's Republicans -- in such Democratic strongholds as, ahem, Nebraska -- who are fleeing McCain. Incumbent GOP Rep. Lee Terry, whose Omaha district is being targeted by both presidential candidates as a possible source of one electoral vote, ran newspaper ads this month featuring a hypothetical "Obama-Terry voter." It turns out that to most Democrats, the pluses of an unprecedented turnout organization, wild enthusiasm among supporters and a gazillion dollars in campaign ads outweigh the minuses of a weird name and a liberal voting record.

7) The Hillary Holdouts Will Never Come Back

During July and August, just about the easiest way to get on television was to announce that you were an angry Hillary voter who would never, ever support Obama. Of course, political science studies dating back three decades show that party loyalty invariably trumps hurt feelings by the time November rolls around. Guess what? For all the PUMA (Party Unity My Ass) nonsense that filled the airwaves over the summer, the Pew Research Center poll this week shows that Obama is beating McCain by a 91-to-5-percent margin among self-identified Democrats. So while independent-minded blue-collar voters who may have opted for Clinton in the primary are still being wooed by the Obama campaign in states like Pennsylvania, virtually all the dyed-in-the-wool Democrats have (surprise!) returned to the fold.

But that's Conventional Wisdom for you. Often wrong, but never in doubt.