Hot young thing: Why we love the Easy-Bake Oven

Chefs and psychologists agree: This iconic toy has a recipe for success. Plus: A slide show of its past versions 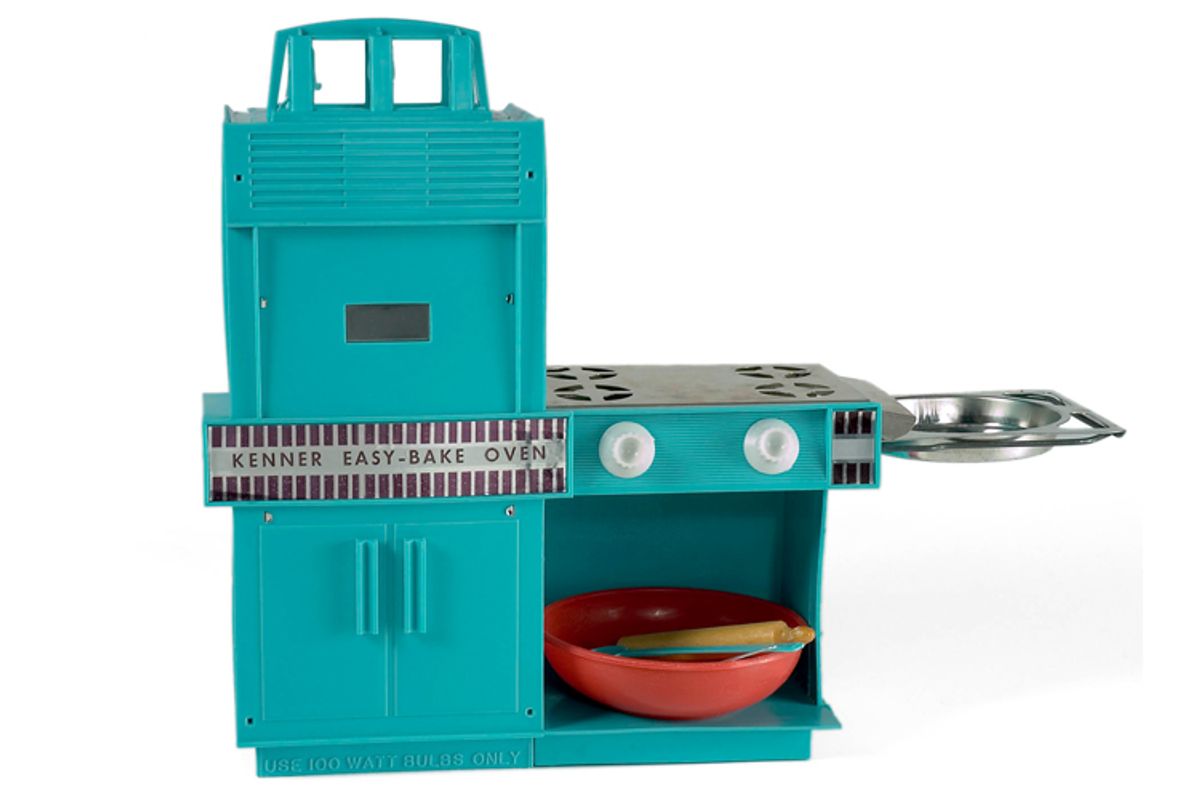 About 50 years ago, walking through New York City, inventor Ronald Howes was struck by the way street vendors kept their food warm using heating lamps. In the cartoon version of this scene, we can see the light bulb from a vendor's cart float to the air above Howes' head, where it pops in a flash of genius. Light bulb ... heat ... cooking ... There among the pretzel carts, Howes conceived of the Easy-Bake Oven, a child-size appliance that uses 100-watt incandescents to bake tiny cakes.

Howes died last week at age 83, but even before memorials started flooding the Internet, Web sites like Feeling Retro had archived hundreds of Easy-Bake memories. Salon spoke with professional chefs who credit their Easy-Bakes for career inspiration, and even research scientists who engage in very serious studies about play were not immune to nostalgic pangs. It might seem easy to explain the Easy-Bake Oven's power over children: It is a toy that makes cakes; a perfect storm of passionate kid desire. But let's face it: Not even the most swooning devotee was in it for the plasticky taste of the treats. So why does the Easy-Bake Oven have such power over us?

"I ALWAYS wanted an Easy-Bake oven as a girl. Never got one. Although now I have a real oven, it still isn't the same," writes Jane Gannon, the membership coordinator of the National Institute for Play and one of the many people who spontaneously erupted with Easy-Bake longing when I contacted them. Gannon was merely forwarding my e-mail to Dr. Stuart Brown, the organization's founder, but she seemed unable to resist telling us both about her thwarted Easy-Bake desire.

"She doesn't send me stuff like that very often," says Brown. "Usually it's just business. There's something about the Easy-Bake Oven."

Brown is a clinical psychiatrist, an expert on play behavior, and a 2006 TED conference speaker who became convinced of the critical importance of play in human development when he discovered a link between homicidal behavior in young men and a lack of play in their childhoods.

By way of explaining Gannon's reaction, Brown says that the pure emotions of a child at play are often lost in adulthood. "Anything that rekindles the purity of that play emotion is very powerful," he says. The appeal of a toy like the Easy-Bake Oven, which combines the fantasy of play with the practical reality of making food that can actually be eaten taps into something even deeper. "[It's] really very primal, a very necessary part of becoming competent as a child and growing into adulthood," Brown says. He explains that, neurologically, this type of play behavior "arises from the deepest and most survival-oriented circuitry in the human brain."

Patricia Hogan, curator at the Strong National Museum of Play in Rochester, N.Y., where the Easy-Bake Oven is ensconced in the Toy Hall of Fame, agrees. "The play involved in an Easy-Bake Oven is very grown-up," she says. "You have to follow directions. You have to measure. Kids have to do all the things they see grown-ups do, and part of the appeal was in imitating the adult world."

And if the appeal of the Easy-Bake Oven for children is rooted in such ancient themes, it is not surprising that other aspects of the toy come from an older tradition. Lynn Peril, author of "Pink Think: Becoming a Woman in Many Uneasy Lessons" and archivist of all things retro and girly, notes that working toy ovens have been around since the turn of the century, although they were, as she says, "insanely dangerous." And even before that, Peril points out, Louisa May Alcott wrote about a miniature oven "in loving detail" in the 1871 book "Little Men."

Despite such basic toy appeal, the ovens were almost always marketed as a girl's toy with what Peril calls "hideous gender stereotypes" in the ads (cooking + baking = femininity). Hogan notes that there were early attempts to make the original Easy-Bake Oven more boy-friendly by toning down the aspects that looked like traditional cooking. "Even back in the '60s, they made an add-on popcorn popper," Hogan says. "I think the intention was to make the toy more acceptable, probably not just to boys but to their parents too. You've got to remember that back in the '60s gender roles were more rigid than they are today." But in 2002, Hasbro released a boy-targeted oven lamely called the "Queasy Bake Cookerator" with mixes for "mud n' crud cake" and "dip n' drool dog bones." Even in the age of the foodie, we are still going to great lengths to convince boys that cooking doesn't make you girly.

Still, Peril suspects that there was a lot going on beneath the stereotypes. "I don't believe for a minute that there weren't boys playing with it all along," she says. "Because the fact of the matter is, we all like to eat -- that's the whole thing. I think most people are really interested in food, so to assume that boys were not playing with the Easy-Bake Oven, even if it was their sister's, or even if they were afraid to ask it for themselves, or even if they did ask and were roundly told that it was a girl's toy, is wrong."

Stephanie Samuels, owner of Angel Food Bakery in Chicago, has a prized collection of 25 Easy-Bake Ovens in her shop. "I have a lot of men that come in and say they always wanted one," Samuels says. She sympathizes, because she never had an Easy-Bake Oven, either, "so therefore I now have a gazillion of them," she says. When you want a toy in childhood, Samuels says, "you can't imagine anything cooler in the universe, and then if you don't get it, I think stuff like that really sticks."

Samuels has woven her career from the threads of these unfulfilled childhood desires; her shop sells homemade, high-quality versions of Twinkies, Igloos, and whoopee pies. Samuels was raised in the late '60s and early '70s ("When the whole health food craze started," she says), and rarely got to eat these treats. "Stuff like that sparks that nostalgia. It's almost like a mouth memory," she says. "I wanted people to be able to go back to that time and enjoy what they used to be able to enjoy without any guilt, without any baggage."

Samuels turned her nostalgia into a career, but some chefs took a more direct route from the Easy-Bake Oven to the professional kitchen. Debbie Gold, a James Beard Award-winning chef from Kansas City, was fascinated by what she would pull out of the Easy-Bake Oven she had when she was 6 years old. "You couldn't wait to see it; you couldn't believe it actually cooked," she says. "It was just an amazing sort of magical thing that happened."

Gold sounds a lot like Dr. Brown at the National Institute for Play when she describes her career. Brown says that what distinguishes work from play that imitates work is that in play, the process is more important than the outcome. And for Gold, that process is essential. "Every time you make a plate of food, your passion goes into each dish," she says. "You have to be enjoying yourself if you're putting your passion out every time."

Gold has enjoyed phenomenal success in the kitchen of Kansas City's American Restaurant, and is about to compete on Bravo's "Top Chef Masters." She admits that professional cooking is stressful, difficult and dangerous work, but she manages to hold on to the sense of magic that inspired her as a child.