White House made itself vulnerable to bogus bribe charges

If the administration had actually managed to get Joe Sestak and Andrew Romanoff out, the story would be dead 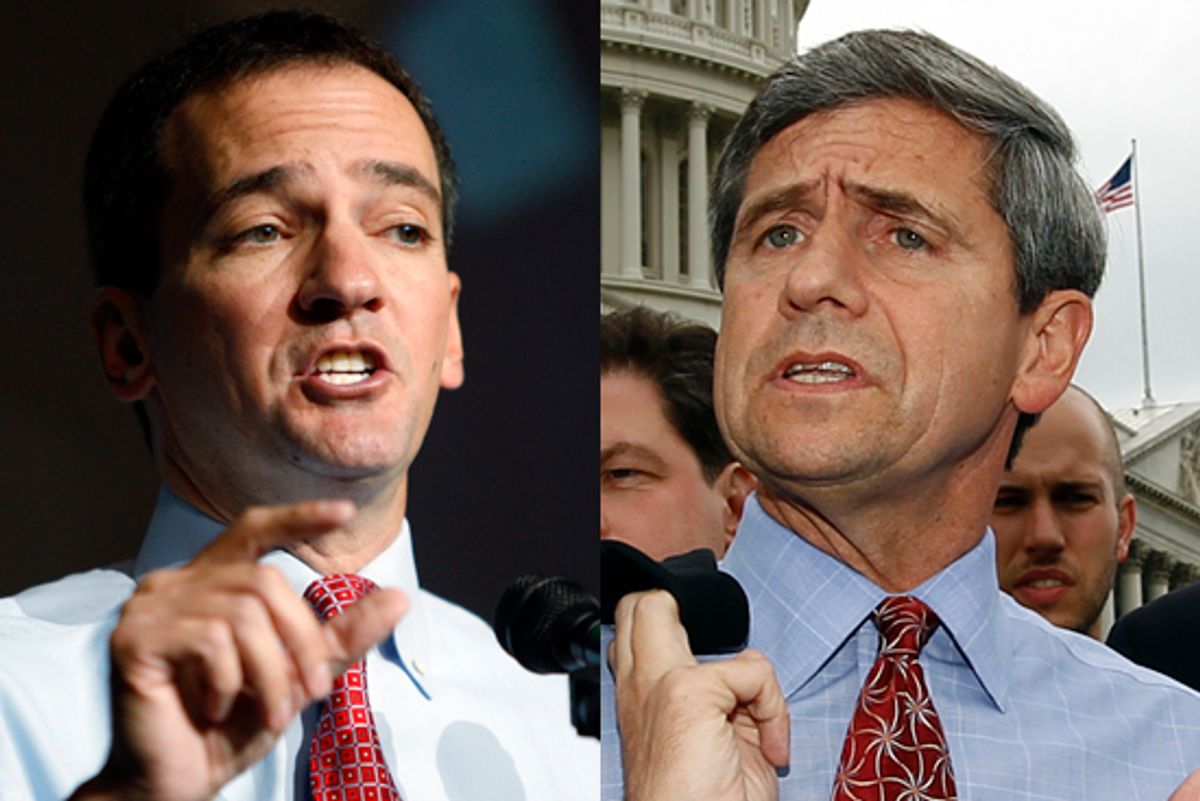 There is, without a doubt, a major scandal hidden in the news that the White House suggested to both Joe Sestak and Andrew Romanoff that the administration might be able to help them find jobs if they didn't run for Senate in Pennsylvania and Colorado. But it's not the scandal cable news anchors and blaring headlines would have you believe.

Ignore Republicans, like Rep. Darrell Issa, who want you to think there's been some nefarious violation of the law here. After all, there's no indication any actual promises of jobs were made -- which means even former Bush administration officials are saying there doesn't seem to be any evidence of any crime. (And Romanoff had already applied online for jobs with the administration when deputy White House chief of staff Jim Messina contacted him to discuss options.) What the disclosures about Sestak and Romanoff really show is that the White House political machine isn't doing its job very well.

The only reason anyone's talking about this stuff now, in fact, is because Sestak managed to knock off the Obama administration's preferred candidate, party-switching incumbent Arlen Specter. Had Sestak lost, the fact that Bill Clinton floated the possibility of a job last summer in a failed attempt to clear the field for Specter would -- maybe -- merit a line in Sestak's Wikipedia page. But as soon as he won, Republicans seized on the offer as a chance to embarrass the White House, which had campaigned on promises of transparency and ethics. (Of course, Obama never promised that "ending business as usual" would mean an end to the very basic concept of giving politicians something they want in order to sweeten a deal to make them do something they don't want to do, but never mind that.)

When previous administrations used the same tactic, no one ever got upset. Take Karl Rove, for example. Eight years ago, Rove and then-Vice President Dick Cheney convinced Tim Pawlenty (at the time serving as Minnesota House majority leader) not to run in a GOP primary for the Senate against Norm Coleman. Why didn't anyone accuse Rove of shady deals then? At least in part because it actually worked -- Pawlenty stayed out. But it would be fairly naïve to assume Cheney and Rove made no promises at all in exchange. Rove, though, didn't let that stop him from blustering recently that Sestak is either a liar or protecting a felon.

Unlike the early days of the George W. Bush administration, though, when President Obama's aides give orders to Democrats around the country, they don't necessarily seem to listen. In Pennsylvania, they couldn't keep Sestak out (though it wasn't entirely clear that, in June 2009, anyone in the White House thought Sestak posed a serious threat). In Arkansas, Lieutenant Gov. Bill Halter ignored the establishment's preference to let Sen. Blanche Lincoln slide without a challenge. In Colorado, Romanoff wouldn't even take a job he'd already applied for instead of challenging Sen. Michael Bennet. The administration also failed to lure their preferred candidates into races in Illinois, North Carolina and Florida -- not to mention Delaware, where Vice President Biden's own son decided not to run for the Senate -- and had no luck trying to muscle New York Gov. David Paterson out. (The New York Times took care of that for them, it turned out.)

So the disclosures this week have Democrats grumbling (though still only under condition of anonymity) about a political operation that seems to have fallen asleep since the 2008 campaign. "What became news was that they let [the job offers] become news," says one Democratic strategist who has worked with a campaign the White House tried -- and failed -- to quash. "This is not new, this is not news, there is nothing untoward or unusual. Reading about it on the front pages is the mistake that happened." Another strategist admits there's a "competence argument" that's more compelling than any of the legalistic ones the GOP is pushing. (The White House didn't immediately respond to a question about the administration's political operation.)

Which is why the Republican protests might, in the end, be smarter than they look. It's a tough sell to convince anyone except overeager cable bookers that there's any real criminal controversy here. It's far easier to turn the whole mess into yet another embarrassing problem for the administration -- especially with Rod Blagojevich about to go on trial for corruption charges stemming from his own efforts to sell Obama's old Senate seat. This isn't about sending anyone to jail. It's more about scoring political points. Unfortunately for the White House, their bumbling attempts last summer to go about the day-to-day business of politics made it easy for the GOP to turn things around on them now.