"The Killer Inside Me": Much ado about misogyny

"The Killer Inside Me's" violence will shock and offend. But it's a crucial element of an important, flawed film 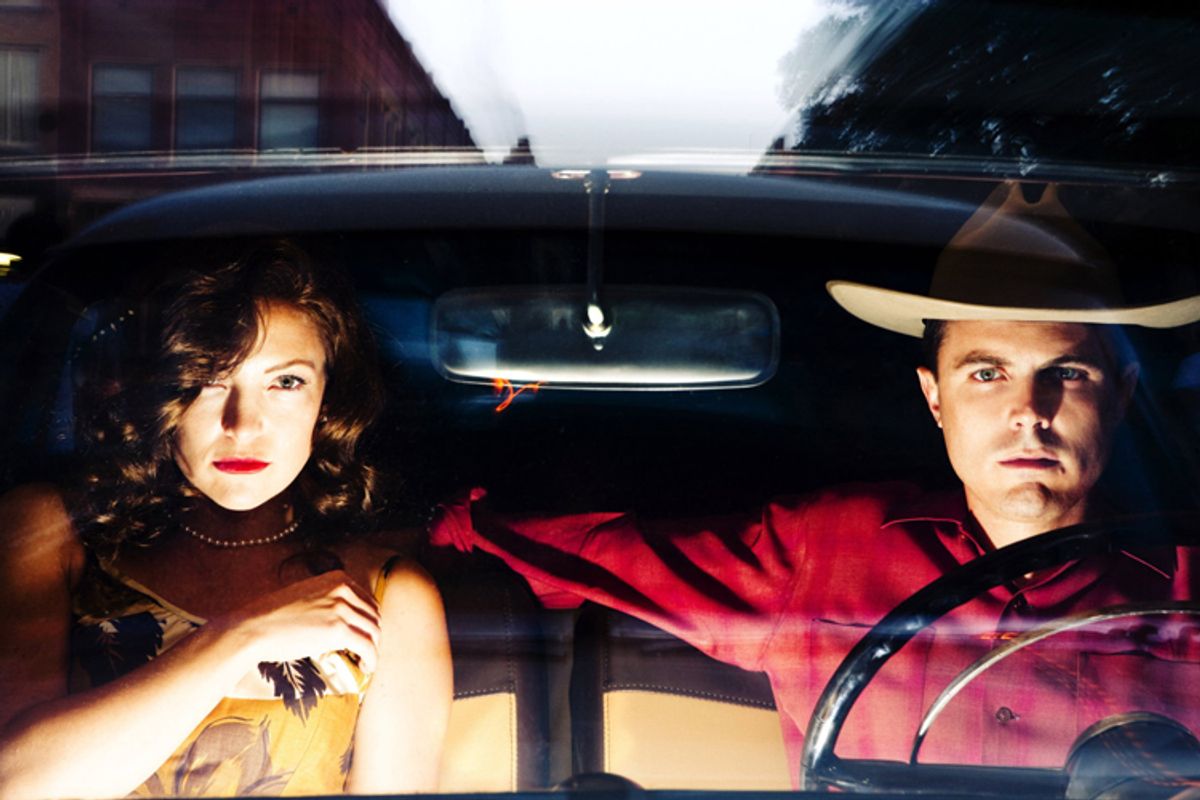 As was already clear when I wrote about the Tribeca Film Festival premiere of "The Killer Inside Me" two months ago, Michael Winterbottom's adaptation of Jim Thompson's legendary 1950s crime novel is likely to provoke a strong, and strongly divided, response. "The Killer Inside Me" tells the story of Lou Ford (played by Casey Affleck), who presents as an all-American deputy sheriff in small-town Texas but gradually slides into psychotic, misogynistic violence.

Since Lou narrates the Thompson novel, and film is by its nature a more detached and objective medium than fiction, there are limits to how well Winterbottom and screenwriter John Curran can capture the book's eerie, haunting power, or Lou's willful lack of self-knowledge. But the novel's most notorious scene, in which Lou calmly pulls on a pair of black gloves and sets about beating his hooker girlfriend to death, all the while apologizing to her and telling her he loves her, is rendered in explosive and terrifying detail. It serves as a rupture in the film's narrative of reality, one almost as dramatic as the moment when the film appears to break in the projector during Bergman's "Persona."

Up till then, Lou appears to be an intriguing, somewhat dark film-noir hero. Yeah, he's cheating on his wife, he bends his law-enforcement role to suit his own purposes, he has an appetite for sadomasochistic sex. You may or may not find that distasteful, but it belongs to the genre. This horror-show does not. Here is this handsome, intriguing good-boy/bad-boy character, in whom we have invested at least a little prurient identification, pummeling a beautiful woman's face into a grisly, bloody mass while murmuring, "Hold on, sweetheart. It's almost over." You sit there in shocked disbelief: This can't be happening. But it is.

It's a dreadful scene that provokes powerful emotions: Pity and terror, of course, for Joyce Lakeland (Jessica Alba, in the movie), who loves Lou passionately and yearns to make him happy and would probably still forgive him for this vile betrayal. Beyond that, though, what's also shocking is the sense that we are implicated in the crime: It's as if, by taking the ride with Lou through his moral ambiguity and his smoldering, dangerous sex scenes with Joyce, we've given him permission to push through all possible boundaries of good and evil and decency and sanity, like a demented Nietzschean Superman. You get the same feeling, in a somewhat different fashion, from reading the book. Thompson almost taunts us: OK, crime-fiction readers, you want a story about a dark-hearted killer? That's what you paid for, right? Well, try this.

Unfortunately, "The Killer Inside Me" has already become a Rorschach blot that reflects the public's widely varying ideas about extreme media depictions of violence, especially violence against women. I say "unfortunately" because few of the pro-or-con responses based on that perception will do justice to the work itself. If you believe, or fear, that movie violence serves as a form of pornographic wish-fulfillment for male audience members, and may in fact legitimize or enable acts of real-world violence, then of course you'll find the movie repellent and indefensible, no matter how well it's executed or what its creators have to say about it.

One could certainly argue that that view is simplistic and uninformed. (I'm reminded of then-Sen. Hillary Rodham Clinton's attacks on the "Grand Theft Auto" games, which she clearly hadn't even looked at, let alone tried to play.) At the risk of starting a long and contentious sidebar discussion, I'll suggest that generations of sociologists have tried and failed to establish clear links between watching violence on-screen and committing violent acts in person. Leaving that issue aside, the most common rejoinder from defenders of media violence -- that it plays a complicated and cathartic role for the spectator, whose focus shifts back and forth from victim to perpetrator -- may miss the point of Thompson's novel even more.

Winterbottom's adaptation of the novel is spellbinding cinema, with all the atmosphere, technical excellence and expert pacing the British director is known for. Perhaps more important, it captures much of the nihilistic soul of Thompson's novel, which aims to be a self-undermining critique of crime fiction, as well as a bleak biblical parable about the darkness and violence he sees at the heart of America and masculinity and perhaps human nature. In a funny way, "The Killer Inside Me" comes closer to agreeing with its critics than its defenders; it's almost a work that argues that it ought not to be seen (or read), or at least ought not to be necessary.

I would argue, in fact, that the book and movie's portrait of Lou Ford pre-echoes some second-wave feminist ideas about men, women and rape, such as those of Susan Brownmiller. Thompson believed that male-female sexual relations, even in their so-called normal guise, contained hints of violence, and that it didn't take much to tip them over into terrible brutality. He definitely does not depict Lou and Joyce's S/M sexual relationship as innocent and consensual play (as contemporary p.c. sexuality would have it), but as the mutual opening of a door that leads to much darker places. There are hints of a psychological explanation, if you want them -- Lou has a history as both a sexual abuser and an abuse victim -- but the boundary between normalcy and raving psychotic madness seems dangerously permeable.

As I wrote in April, to complain that "The Killer Inside Me" is full of misogynistic violence is a little like reading "Moby-Dick" and objecting to all the stuff about whaling. Violence against women is Thompson's text and theme and central metaphor -- and in case I haven't made this clear, anyone who might find the violence in this movie gratifying or arousing is already virtually beyond the bounds of professional help.

Played by Affleck with unruffled aplomb, Deputy Lou doesn't even carry a gun because crime in the oil boomtown of Central City, Texas, is nearly nonexistent. But beneath his ultra-normal veneer Lou has the tastes and background of a depraved European aristocrat (indeed, I suspect Lou served as an inspiration for Thomas Harris' creation of Hannibal Lecter). He's probably the only person in Central City who reads Freud and listens to Schubert -- or whose sexual appetites suggest the Marquis de Sade or Georges Bataille.

Within the first few minutes of the film, Lou is sent to run Joyce out of town and she responds by slapping and slugging him. She's bored and lonely and sick of sleeping with ugly guys for money; she's looking for a reaction, and she gets one: On the verge of walking out, Lou comes back and tackles her, pulling down her panties and whipping her bare ass with his belt. The sequence is both erotic and violent, profoundly troubling and potentially arousing, designed to provoke a whiplash of emotional, psychological and libidinal responses. It sets the table for what follows: an exploration of the dividing line between sex and death that's at least as morbid and philosophical as anything in modernist European literature.

Depending on your point of view, Lou is either a deranged sociopath or an inevitable product of his environment, and the genius of Thompson's novel -- and of screenwriter Curran's extraordinarily faithful adaptation -- lies in the fact that interpreting what happens is entirely up to you. Lou himself does not understand why he does the vicious and bloody things he does (Affleck narrates some portions of the film in bursts of Thompsonian prose), but as the story becomes increasingly fantastical and grotesque, he gets a pretty clear idea how it's going to end.

You can make a case for "The Killer Inside Me" as one of the most important American novels of the 20th century, but it's essentially a work of fatalistic allegory, and as Winterbottom's film goes along it can't help becoming more like an ordinary crime movie. Ned Beatty, Elias Koteas and Simon Baker stand out among the cast of befuddled Central City locals -- Baker plays the out-of-town lawman who first suspects that Lou's behind the local crime wave -- but Kate Hudson is a bit stranded as Lou's doomed fiancée, Amy. She meets a similar fate to Joyce's, late in the film, and while Winterbottom is sticking close to the book here, as elsewhere, I think he's violating a cardinal rule of moviemaking: Show us something shocking once, and it has a didactic force. Show it again, and it becomes technical, or sickening, or both.

If the pileup of corpses and the ensuing ludicrous conflagration that ends "The Killer Inside Me" is the only conclusion Lou can imagine, Winterbottom and Curran might have thought a little harder about the fact that Lou is completely insane. In a novel, especially one with an unreliable narrator, there is no necessary distinction between fantasy and reality, and no way to verify or falsify the narrator's account. Lou Ford longs to destroy not just himself and those around him -- especially those who love him -- but also the story he's telling and those of us reading or watching it. If Winterbottom's film were literally a bomb that blew us all up after we watched it -- that blew us up because we watched it -- it might fulfill all its antihero's and original creator's ambitions.

"The Killer Inside Me" opens June 18 in theaters in many major cities. It will also be available  on-demand via IFC In Theaters, on most cable-TV systems.