In defense of Paul, the psychic octopus 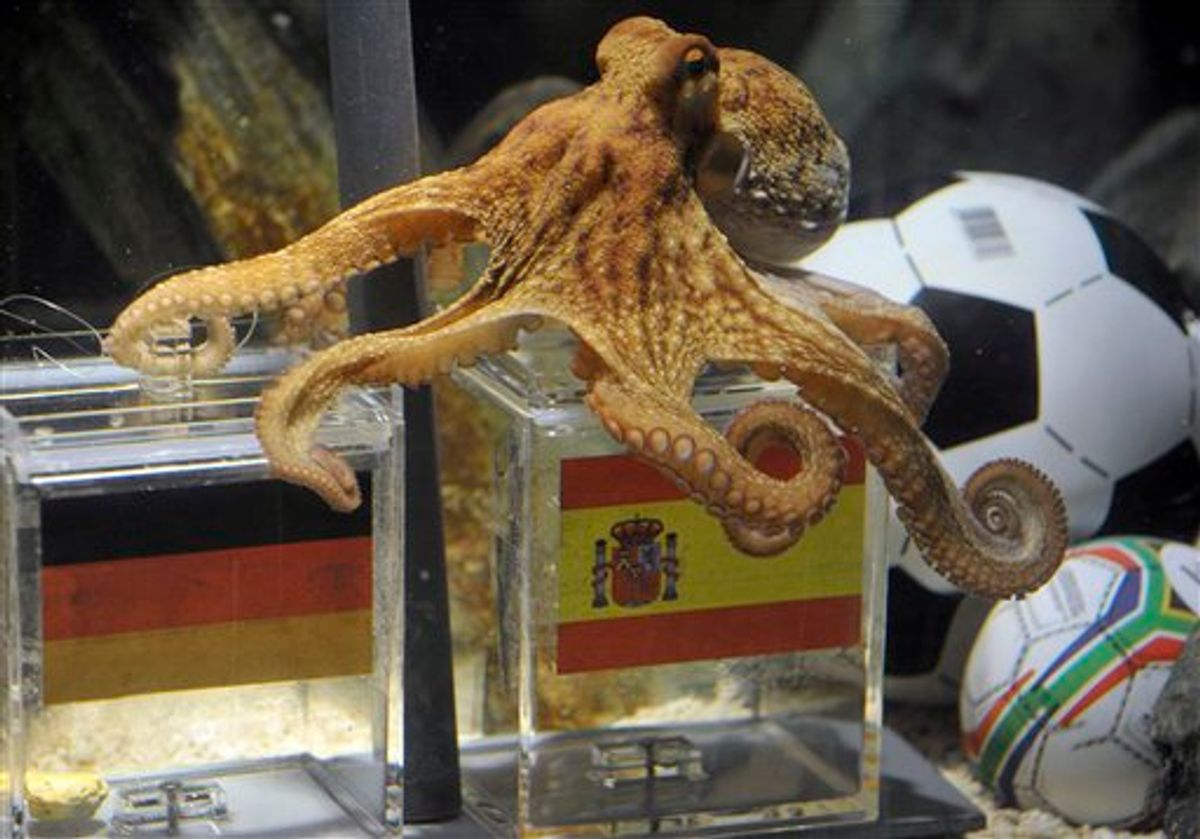 Octopus Paul fixes the spanish box during his oracel for the semifinal match at the World Cup in South Africa between Germany and Spain in the SeaLife Aquarium in Oberhausen, Germany, Tuesday, July 6, 2010. Paul predicted all German matches during the World Cup 100 procent right. Octopus oracle Paul is predicting Germany will be defeated by Spain at the World Cup semifinal. Sea Life Aquarium's spokesman Daniel Fey said Tuesday that the famous mollusk from Oberhausen chose a mussel from a glass tank marked with a Spanish flag, while ignoring the tank marked with the German colors - indicating a Spanish victory in Wednesday's semifinal. (AP Photo/dapd/Mark Keppler) (AP)
--

There's no such thing as a sure thing. Unless you're talking about a psychic octopus. While fans around the planet have been watching the World Cup in breathless suspense these past few weeks, Paul, an unassumingly named German oracle, has been drawing awe, ire and death threats for his knack for predicting with astonishing accuracy the outcome of the matches.

How does he do it? Well, that's a matter that defies rational explanation. But the nuts of bolts of his method are simple: His keeper at Oberhausen's Sea Life aquarium puts two containers of mussels in his tank, one emblazoned with the flag of Germany, and the other, of its football opponent. The nation that bears the flag of the mussel he deigns to feed on is assured victory. Paul, who's been calling the outcomes of German football matches for the last two years, has only failed once, unsuccessfully ripping into the German-designated mussels before the Euro 2008 final went to Spain. His predictions are so revered that they're carried live on German television, giving Europeans something to preempt reruns of "Baywatch."

Frankly, it's the mollusks we feel sorry for here.

But while he's been enjoying unprecedented international acclaim this World Cup, Paul has also learned that unusual power can inspire fear and hatred among those who don't understand his gift. When he correctly intuited last week that Germany would defeat Argentina, so outraged were South American fans that they called for his execution. The newspaper El Dia helpfully printed a suggestion for Paul's next gig -- as the star of a paella recipe. And Argentinean chef Nicolas Bedorrou posted on Facebook that "We will chase him and put him on some paper. We will then beat him (but correctly!) in order to keep the meat tender and then put it in boiling water." Kind of makes you think we've been going easy on SportsCenter.

Like a tectacled Patricia Arquette, Paul can't help what he sees. He can't dissemble. And he's successfully predicted every German match so far this World Cup. So when he looked at those mussels to predict the winner as his home team faces its old rival at the semifinals Wednesday, all three of Paul's hearts must have been heavy when he did what he had to do. He hesitated, seemingly wracked with the weight of his choice. And then he ate Spain.

The shocking, seemingly disloyal pick rocked Germany. The newspaper Bild warned, "This is not a good omen," while one of his zookeepers mused, "Maybe Paul was just trying to give Spain a false sense of security."  Poor Paul. Truth tellers are not always esteemed in their time, as losing politicians, unpopular comedians and graffiti artists will gladly tell you. How long before the tabloids link one of Paul's posse to that near fatal attempt on Jeremy Piven's life?

Yet if he plays his cards right -- and he's got enough arms for the job -- Paul could today find himself in the aquatic equivalent of the catbird seat. Should Spain win, he's a damn genius. Should Germany secure victory, who in his country is going to give a crap about an octopus? As for his possible future as a plat du jour, the enigmatic cephalopod would offer no further comment Wednesday. But his keeper Oliver Walenciak told the U.K. Telegraph, "There are always people who want to eat our octopus, but he is not shy and we are here to protect him as well. He will survive." Amazingly accurate, not shy and no history of sexual harassment? Paul, come to America. You'd be the greatest thing to ever hit ESPN.