How do we cast out the demons who keep making low-budget, faux-realistic horror movies? 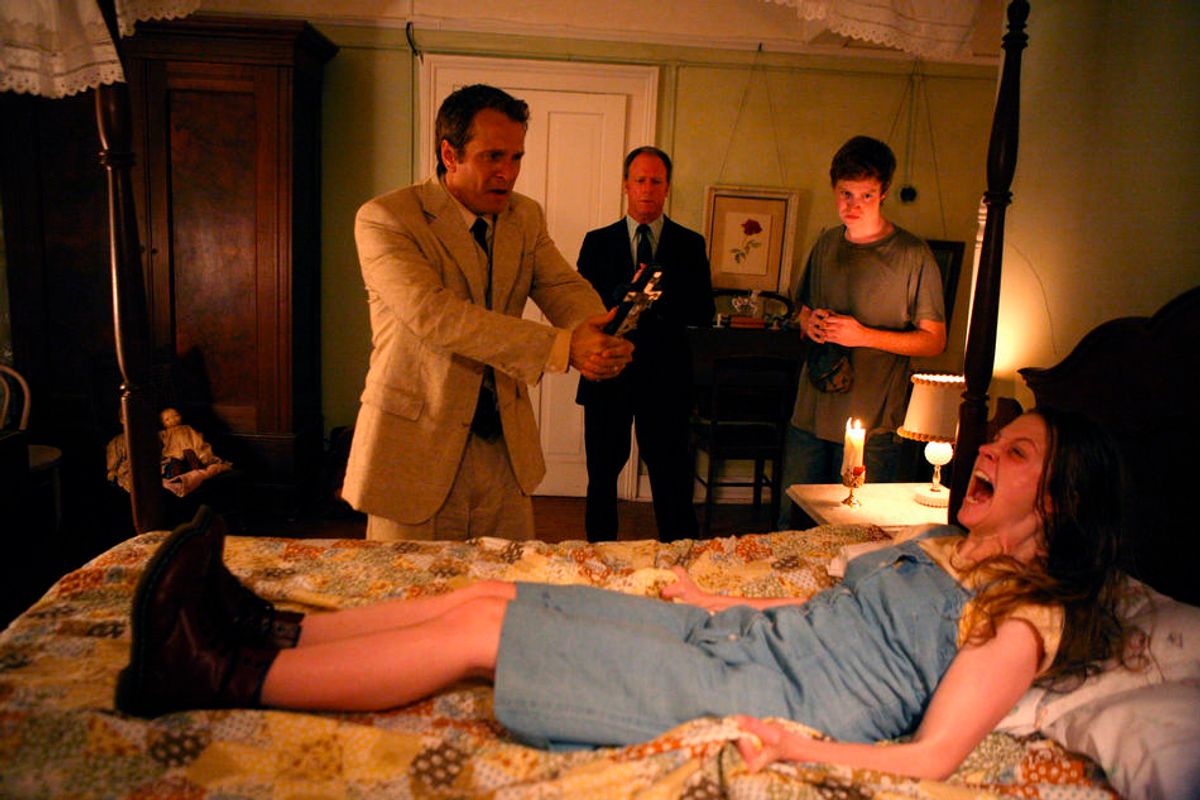 A still from "The Last Exorcism"
--

I know, I know: You're an aspiring filmmaker in Oklahoma City or Bloomington or wherever, you've got a camera and some chops and a whole bunch of fearlessness, but nobody in the actual movie business will give you even a microsecond of their attention. So you came up with a bitchin', attention-grabbing premise: Your horror movie's going to look like raw documentary footage, full of mistakes and retakes and hinky camera angles and jagged non-edits. In fact, why not make your movie be about a documentary crew, thrown into some situation that seems normal at first but turns out to be scary as hell?

We both know that I'm going to tell you I'm heartily sick of this trend, and that you're going to go ahead and do it anyway. And why wouldn't you? The shorthand realism of the faux-documentary or found-footage horror film, from "The Blair Witch Project" through "Cloverfield," the "[Rec]" movies and "Paranormal Activity," has been a gift that keeps on giving. It resurfaces once more in "The Last Exorcism," a moderately scary and largely agreeable New South horror fable directed by newcomer Daniel Stamm, from a script by the ingenious duo Huck Botko and Andrew Gurland (of the cult hit "Mail Order Wife" and the forthcoming "Virginity Hit").

"The Last Exorcism" follows the blueprint for breakout success with almost fundamentalist fervor. It's a movie about a movie about a pretty-boy Louisiana preacher (the terrific Patrick Fabian), who's lost his faith in Jesus and is eager to prove that the demonic exorcisms he's been conducting for years are fraudulent. When he comes up against what may be the real thing, of course, both he and the hipster camera crew following him around are plunged into mortal danger. I don't really get why this package has to include viral or "ambush" Internet marketing that has nothing to do with the movie -- e.g., chat-site hotties who turn out to be underpaid actresses with fake blood gushing from their eyeballs -- but it does.

Despite such stunts, and the presence of "Hostel" creator Eli Roth as a producer, "Last Exorcism" has minimal bloodshed and only a few cheap special effects. It begins as the story of Fabian's Cotton Marcus, a handsome Baton Rouge suburban dad who's been preaching since childhood and selling exorcisms pretty much the way other guys with expensive dental work sell BMWs and McMansions. He's agreed to take the documentary crew out to see one purported possessee, picked at random, to demonstrate how it's done.

At first glance, the case of Nell Sweetzer (Ashley Bell), a shy, sweet-faced teenager on a backwoods farmstead, seems plenty creepy, but not in the supernatural sense. She's stuck out there with her brooding brother, Caleb (Caleb Landry Jones), and her widowed dad, Louis (Louis Herthum), who has turned heavily to booze and the Bible since his wife's death. If somebody in the house is killing animals at night, and if Nell's body is harboring a traumatic secret, we don't need to look to Satan for an explanation.

Cotton stages one of his scripted exorcisms -- water mysteriously boils, the bed shakes, pictures jump off the walls and a crucifix emits dry-ice smoke -- and all appears to be well, or at least as well as the troubled Sweetzer household is likely to get. Of course it's not: The documentary crew scrambles out of bed to discover that Nell has appeared in their motel in the middle of the night, which begins a skin-crawling series of revelations about what's really going on in the Sweetzer family, all seen through their camera's eye. (In the movie's best and scariest scenes, they aren't controlling it.)

But while the characters, premise and decrepit Southern setting of "The Last Exorcism" remain compelling throughout, the pseudo-documentary premise is paper-thin at the outset and wears out long before Botko and Gurland's script lurches toward the dumbest and least plausible solution to the mystery. Are we supposed to believe that we're watching all the footage for this unfinished documentary -- these people have followed Cotton around for days and shot just 90 minutes? If that's not it, then who cut it down in this messy way, full of outtakes and accidents? If this was a vanity production made for the Prince of Lies, can't he afford an editor?

Of course, the real answer is that "The Last Exorcism" undermines itself because it's just a cheapo horror movie with a gimmicky framing device. It isn't trying to convince anybody that OMG This Totally Happened -- those innocent days are behind us -- rather, it's pretending to be pretending that it's real. So some good acting and decent scares get entombed within too many dull postmodern iterations. That's definitely not a crime, but it bugs me that this particular indie-horror formula gets cranked out to a large audience, over and over again, while something genuinely terrifying and original, like Graham Reznick's "I Can See You," comes and goes unnoticed.