What would you pay for John Wayne Gacy's clown art? 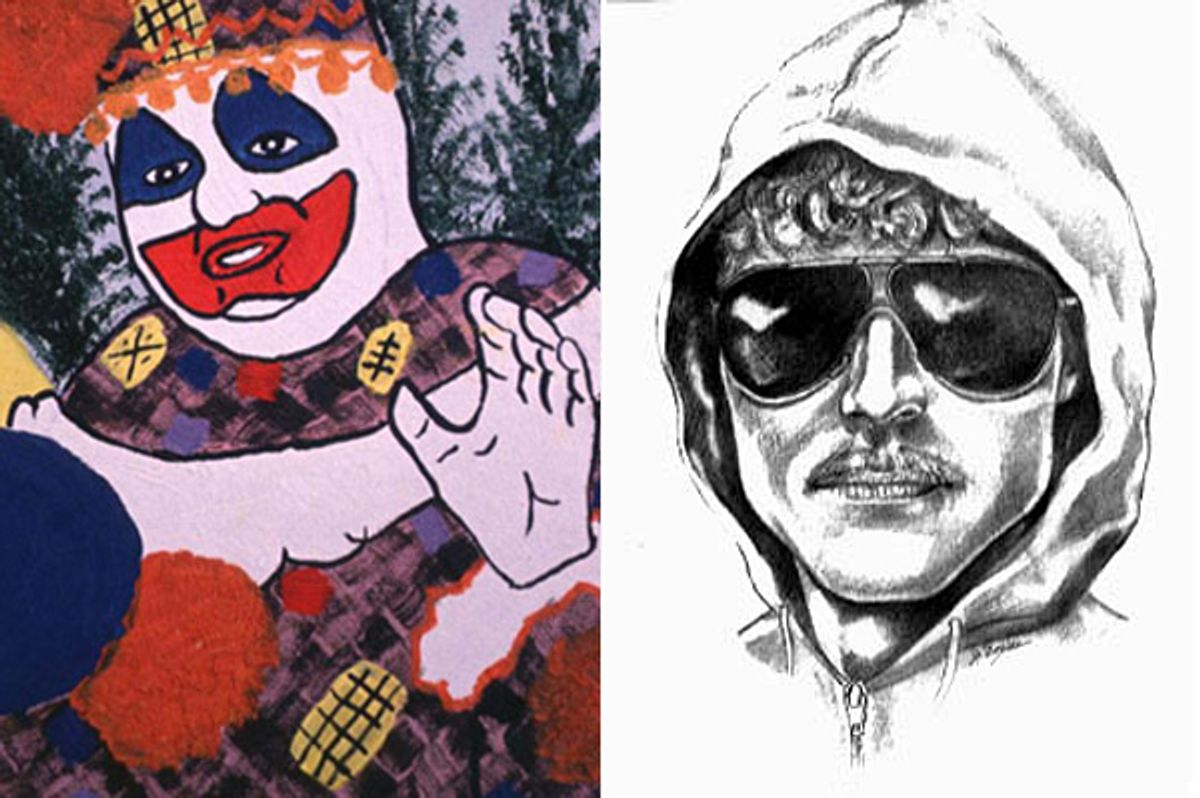 A painting by John Wayne Gacy (left) being auctioned off, and a sketch of the Unabomber, Ted Kaczynski.
--

What kind of person removes himself from civilization and becomes a domestic terrorist? What sort of monster keeps the bodies of teenage boys in the crawl space of his home?  Throughout history, mankind has grappled with the questions of what drives human beings to acts of unspeakable evil. But while we may never know what goes on in the minds of murderers, bust out your checkbooks, folks, because at least now you can buy their stuff. In a bonanza for collectors of psychopath ephemera, some of the more notorious possessions of both Ted Kaczynski and John Wayne Gacy are going up on the block.

On Thursday, the U.S. Marshals Service announced that it was auctioning 60 lots of possessions seized from Kaczynski's Montana cabin after his 1996 arrest, including the original handwritten and typewritten versions of his infamous "Unabom Manifesto," his typewriters, shoes, diaries and thousands of books. The proceeds from the sale, which runs from May 18 to June 2, will go to four of his victims and their families. Last year they were awarded $15 million in compensation, a ruling Kaczynski, whose 20-year terror spree killed three people and injured and maimed 23 others, bitterly tried to block on the grounds that it violated his First Amendment rights.

John Wayne Gacy, the man who raped, tortured and killed 33 young men on a horrifying six-year spree, has no similar word of protest about his possessions; he was executed in 1994. And if your shopping taste runs less to dirty shoes and sunglasses and more to scary clowns, a Las Vegas gallery is exhibiting and selling off his works in an exhibition called " Multiples: The Artwork of John Wayne Gacy." Gacy, who famously developed a painting hobby while on death row, cranked out dozens of canvases in his last years, from disturbing skulls to portraits of Elvis and Charles Manson to greeting card-ready flowers and birds.

Starting this month and running through September, the Arts Factory is offering his works for between $2,000 and $12,000 apiece, promising that proceeds from the exhibit, "according to the wishes of the executor of Gacy's art portfolio," will go to "the community at large, including the Contemporary Arts Center, 18b Arts District and the National Center for Victims of Crime." But as CNN reported Friday on the "controversial serial killer's paintings" (as opposed to, say, those of a beloved serial killer),  the National Center for Victims of Crime wants none of it. The advocacy group sent a cease-and-desist letter to the gallery. But owner Westly Myles told KTNV this week, "I see it as an opportunity to help from something that was bad."

So which is it? Crude exploitation or making lemonade out of senseless crime? The Gacy exhibition's press materials ponder, "Can we resist the impulse to attribute these inanimate objects, these oil paintings, to evil? Is the gallery a temple in which only those deemed worthy should be displayed, or is it, rather, a courtroom, a place all artists are equally qualified to be judged?" Hitler was an artist too; it's just not the first of his job titles that springs to mind when you say his name.

The uneasy part of both auctions is the horrible fascination they evoke. The Unabomber auction's Flickr set alone is hauntingly sad and strangely artistic -- like a grimly beautiful Irving Penn tableau.  And while Gacy's work would hardly make it to the MoMA on its own merits, with the right representation and if you didn't know the artist, it could still probably fetch a pretty penny at a downtown gallery.

But we do know who did that portrait of Al Capone. We do know whose old Smith Corona that is, and what was written on it. And though the men who brought unspeakable grief to so many won't reap the financial rewards of the sale of their items, it's their fame that jacks up the monetary value of those pieces. And while there is a strange justice in victims' receiving the spoils of a terrible man's estate, it opens up a moral can of worms about why anything that has been in the hands of someone who killed and raped and mutilated his fellow human beings would be welcome in someone else's home, or hanging on someone's wall. You might buy Tolstoy's pen or Manet's brush hoping a little something will rub off. Does touching evil bring us any closer to understanding it? Maybe. But it definitely raises a new question: What sort of person would spend a few thousand dollars to find out?