The five most ridiculous defenses of Ronald McDonald

A watchdog group is calling for the clown mascot's retirement, but is being creepy grounds for firing? 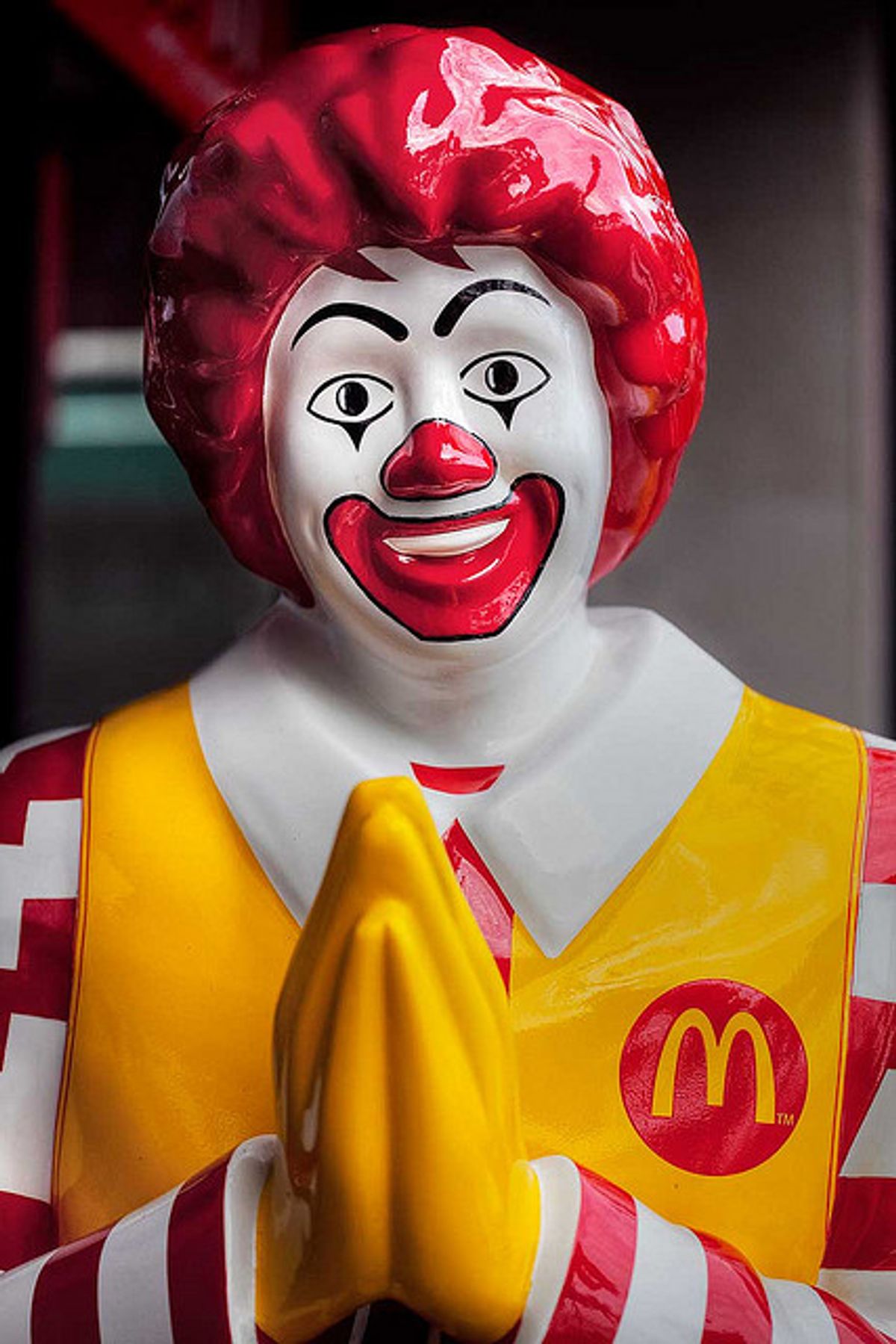 Who wouldn't accept food from this guy?
--

And while this grievance might not seem new, exactly, CAI is launching another campaign on Thursday against Ronald McDonald himself, whom the watchdog group called a "Deep Fried Joe Camel." They claim Ronald's the equivalent of a drug pusher for MSG-addicted kids.

But how "friendly" is Ronald? A new study done by outside marketing group Ace Metric found that in a survey group of 500, an overwhelming amount found a guy with big red lips and white greasepaint more creepy than cute.

McDonald's refuses to give up on Ronald, though, and its defense on why it needs to keep a terrifying clown as its mascot would be charming if it weren't so ridiculous and backward. Below, five of the responses McDonald's has given for keeping Ronald on the payroll.

1. Complaint: "It's really remarkable how often I saw the word 'creepy' [in regards to Ronald]," says the V.P. of a company that conducted the survey.

McDonald's response: "For everyone who may feel that way, there are more who feel the opposite."

McDonald's response: "He is a force for good," says McD's CEO, Jim Skinner.

3. Complaint: Too many damn clowns running around.

McDonald's response: "There's only one Ronald," McDonald's chief creative officer Marlena Peleo-Lazar said in response to several questions about how many actors portray the smiling clown.

4. Complaint: He is hurting a brand image that is trying to be more adult ... like Starbucks.

McDonald's response: He is the brand image. "It would be almost as if the Geico gecko disappeared, or the Aflac duck," says one marketing strategist. God forbid.

McDonald's response: Around 2004, McDonald's christened Ronald as a "balanced, active lifestyles ambassador," and stuck him in commercials where he trained for the Olympics. He got workout clothes. He got a tuxedo. He moved from McDonaldLand into the real world.

You know who can also move into the real world after being trapped in a fantasy land? Freddy Krueger.

It's actually in CAI's favor to have a scary mascot act as a deterrent for children trying to buy fries. It should be thanking McDonald's for keeping such a creepy figure right in front of the golden arches.