Mitt Romney may be poised to take the GOP primary, but it doesn't mean the movement is fading 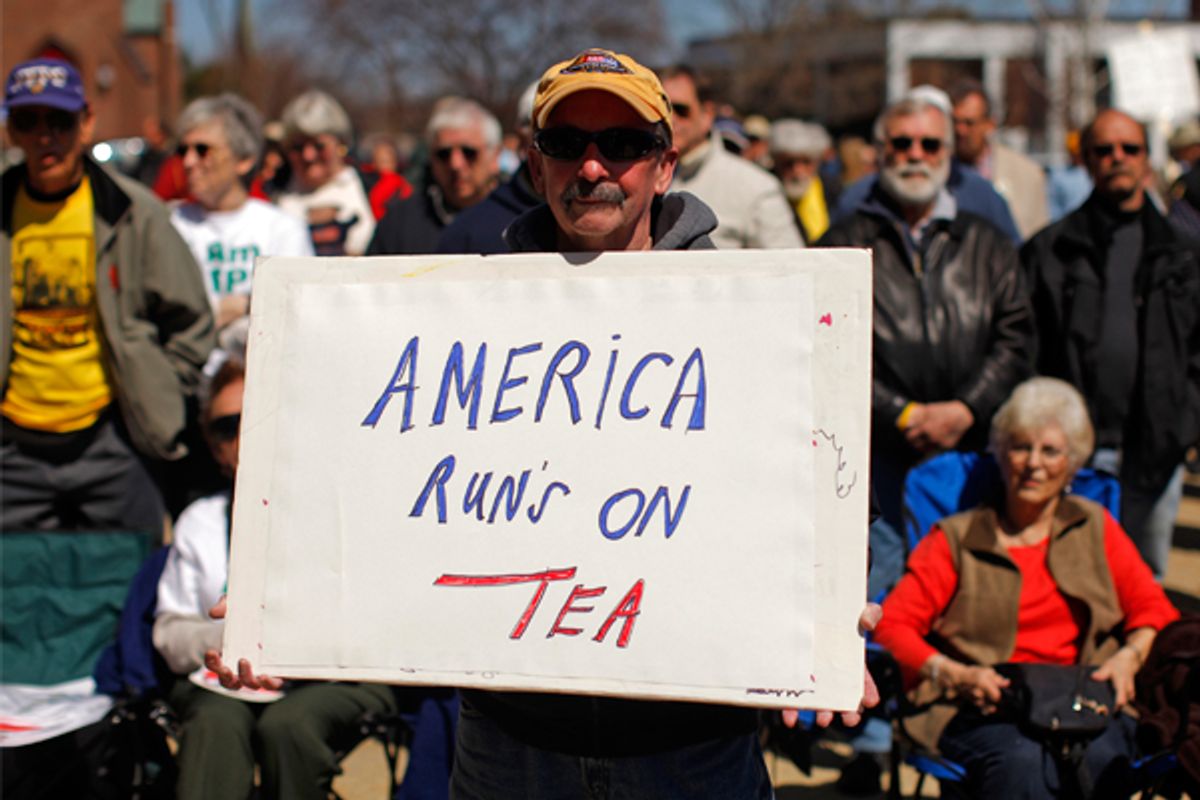 Mitt Romney is still struggling to break the 30 percent mark in Republican presidential polling, but a consensus is building that, one way or another, he's going to walk away with the nomination -- and that it may not even be close. This likelihood is in turn giving rise to another consensus: The Tea Party must be in decline.

After all, if there's one GOP candidate (besides Jon Huntsman) whose nomination the Tea Party supposedly can't abide, it's the formerly pro-choice and pro-gay rights architect of what amounts to the ObamaCare prototype. (The news today that Romney's Massachusetts healthcare law apparently provides some care for illegal immigrants will only strengthen this perception.) In 2010, the Tea Party united behind unknown, underfunded gadflies and derailed well-credentialed candidates like Romney in several high-profile primaries. If the GOP presidential race was being held back then, the thinking goes, surely Romney wouldn't have received the pass he now seems likely to get.

But there's another reason Romney may end up coasting, and why next year's GOP congressional primary season might not be nearly as wild as that of 2010: The Tea Party has already won.

Its victory has mainly been a psychological one. The defeats of Sen. Robert Bennett and Reps. Mike Castle and Bob Inglis along with the GOP primary triumphs of Sharron Angle, Joe Miller, Dan Maes and Rick Scott sent a clear signal to Republican elected officials and party leaders that their base was absolutely serious about ideological purity -- and absolutely opposed to any kind of compromise with President Obama and other Democrats. If they didn't show that they understood this message, and if they didn't back it up with action, they could be next on the hit list. Basically, the Tea Party got in their heads.

And fear of arousing a Rush Limbaugh/Red State-fueled backlash among the party base -- which is essentialy synonymous with the Tea Party -- has clearly shaped the actions of the Republican establishment since last year's uprising. John Boehner set the tone for the 112th Congress when he refused over and over in a "60 Minutes" interview last December to use the word "compromise." Since then, Boehner has presided over one manufactured crisis after another, forced to continuously prove to Tea Party purists that he's not about to sell them out in any kind of compromise with Obama. Even when the president offered the prospect of a "grand bargain" with significant cuts to Medicare and Social Security and only modest revenue hikes, Boehner felt compelled to walk away.

Tea Party fear was also evident in the House GOP's decision to rally around Paul Ryan's politically toxic Medicare privatization plan, which has no chance of becoming law and which provides Democrats with an easy campaign weapon -- but which even reluctant Republicans felt it necessary to vote for. On the Senate side, Republicans have shattered records employing the filibuster to fight anything with Obama's name on it -- no matter how popular it is.

This is why it's not very surprising that the some of the Republican who were initially seen as obvious 2012 targets for the Tea Party may end up facing weak or even nonexistent primary challenges: They got the message and modified their behavior.

Take Orrin Hatch, who rocketed to the top of the endangered list when his fellow Utah Republican, Bennett, was crushed at the state's GOP convention last spring (a result that ended Bennett's reelection campaign). Hatch has a long history in conservative politics (he supported Ronald Reagan over Gerald Ford in the 1976 primaries), but his vote for TARP, occasional collaboration with Democrats (he and Ted Kennedy used to team up now and then), past support for an individual healthcare mandate (which received new attention thanks to ObamaCare), and decades in Washington stirred suspicion on the right. But after watching Bennett go down, Hatch abandoned whatever instinct for compromise he once had, called his TARP vote a mistake, swore off his old support for the mandate, and began attacking Obama with jarring intensity -- branding his healthcare plan "an awful piece of crap" and "a dumb-ass program." And it worked: Hatch's most serious would-be challenger, Rep. Jason Chaffetz, announced over the summer that he won't run for the Senate. Hatch didn't avoid a challenge because the Tea Party weakened; it's because he proved his loyalty to the Tea Party mindset. (Alex Pareene has a pretty definitive guide to what Hatch did to survive.)

Similarly, Maine's Olympia Snowe now seems likely to avoid a serious primary challenge. Her tone hasn't changed as dramatically as Hatch's, but she's been just as willing to play along with the Filibuster Everything strategy. And while Tea Party groups are mobilizing against Indiana's Richard Lugar, who faces a 2012 primary challenge from the state's treasurer, Lugar has helped himself by curtailing any non-foreign policy cooperation with Obama.

This is why a Romney victory wouldn't really be a repudiation of the Tea Party at all. He's tried to be careful with the tone of his rhetoric, mindful that a full-on embrace of all of the right's anti-Obama hysteria could hurt him in the general election. But as I wrote last week, Romney's actual positions are fully in line with the Tea Party's. He's a moderate only in the sense that so many people believe he's faking his conservatism. But while there's good reason for the right to wonder if it could really trust Romney as president, the reality is that he'd be dealing with a congressional party that is fully gripped by the Tea Party mindset. He might have little choice but to play along.