Pick of the week: Bollywood's blissful, idiotic "RA. One"

Pick of the week: From dazzling dance numbers to post-\"Matrix\" action, \"RA. One\" showcases Bollywood\'s confidence 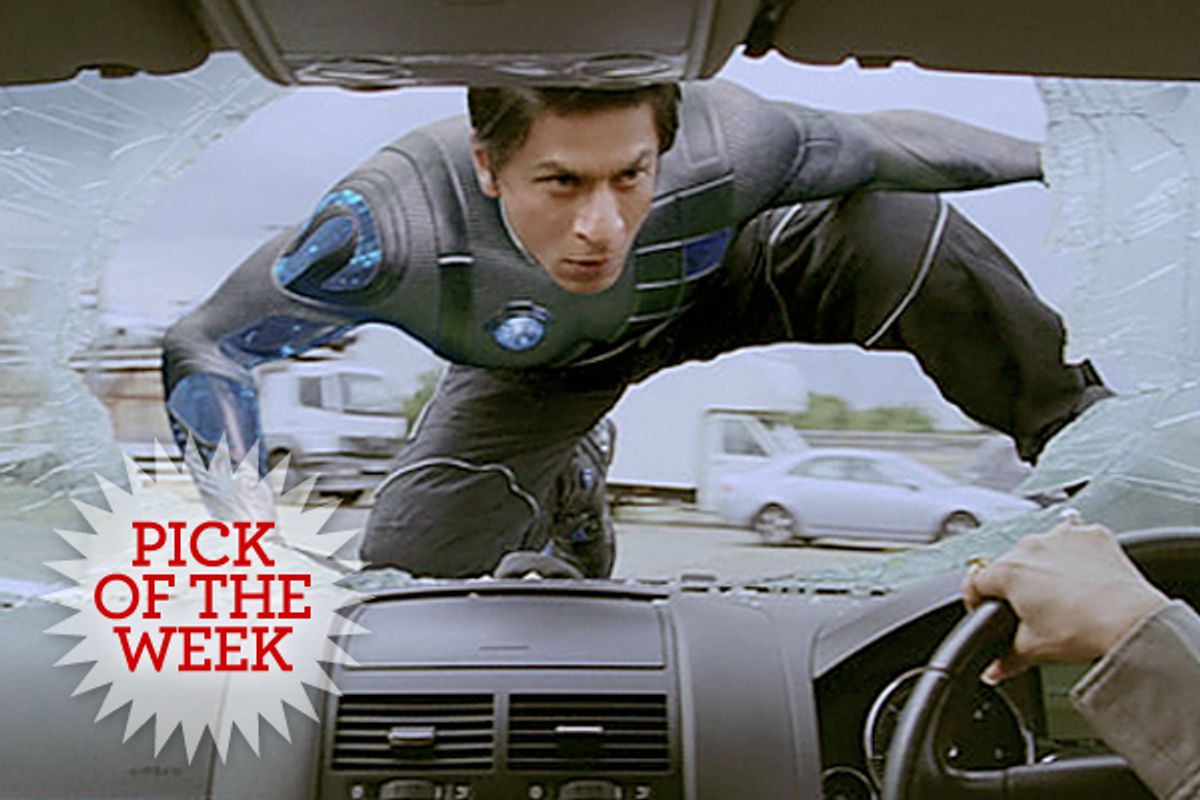 I won't remotely pretend that I'm qualified to judge "RA. One," the Indian science-fiction action-adventure movie that opens all over the world this week, against the larger context of Bollywood cinema. What I can tell you is that "RA. One" is reportedly the most expensive movie the Indian film industry has ever produced, that it represents the continuing fusion of Eastern and Western sensibilities and technologies, and that it's prodigiously silly and miscellaneous and a whole bunch of fun. This is hardly an original statement, but Hollywood had better not take its global supremacy for granted. While "RA. One" is as calculating as all get out, is loaded with blatant product placement and -- in classic Indian style -- combines any number of different and perhaps contradictory genres in an effort to reach babies and grandmas and everyone in between, it never feels cynically niche-marketed or fundamentally bored with itself, the way so many big-budget American movies do.

If you're unfamiliar with Bollywood movies, the conventional thing to do would be to start with an acknowledged classic -- maybe a delirious '90s romantic-comedy hit like "Dilwale Dulhania Le Jayenge" or "Kuch Kuch Hota Hai," both of which feature superstar Shahrukh Khan, who plays both a doofus dad and a video-game hero in "RA.One." Or something more serious and substantial in tone, like "Lagaan: Once Upon a Time in India" or "Mughal-E-Azam" or "Mother India." But seriously, you don't need to bother. "RA. One" is where Bollywood is right now, and no advanced degree in South Asian studies is required to grasp its combo of slapstick comedy, semi-chaste romance, "Matrix"-meets-"TRON" fight sequences and booty-shaking musical numbers, which blend hip-hop, bhangra, traditional Indian dance and ultra-cheesy MTV choreography. Seriously, check out the video at the bottom of this page, which features Khan, voluptuous costar Kareena Kapoor and American R&B star Akon doing the song "Chammak Challo" (which is roughly how you say "hot chick" in Hindi) and then tell me with a straight face that you don't want to see this movie.

Shahrukh Khan is sometimes described as the Tom Cruise of India, in that he's been a movie star for decades -- Khan will turn 46 next week -- and has a similar veneer of indestructible cheerfulness. But, honestly, that's selling the Bollywood star short, since no one regards him as an unstable religious wacko (although he is a Muslim in a predominantly Hindu society) and he hasn't yet encountered the treacherous, self-mocking character-actor phase that Cruise seemingly faces. In "RA. One," he first plays Shekhar, a goofy London video-game designer with appalling hair, who creates a first-person ass-kicking game with an indestructible villain at the behest of his adorable tween son. That smoldering electronic baddie is the title character, whose name approximates the Hindi pronunciation of Ravana, the demonic, 10-headed king of Lanka from the "Ramayana." In between the bevies of dancing girls in skimpy costumes, the gags involving Shekhar acting like a wimp or getting kicked in the balls (four times? Five?), and the no-kissing-allowed, comic-erotic relationship between Shekhar and his wife, Sonia (the robust and irrepressible Kapoor, herself one of the biggest female stars in Bollywood), RA. One escapes from the video game and comes after Shekhar's son, for reasons I won't bother explaining. (He's evil!)

I'm not sure you can spoil the plot of a movie as nonsensical as this one, but let's just say that in the second half of "RA. One" the action shifts from London to Mumbai -- site of a long and pointless airport fight sequence featuring a guest appearance by Rajnikanth, a superstar of Tamil (as opposed to Hindi) cinema -- and Khan plays G. One, the hero who emerges from the video game with a 0.01 percent chance (we are told) of defeating his nemesis. (At 146 minutes, "RA. One" is pretty brisk by Bollywood standards, but as is customary in India and many other markets, it will play with an intermission.) Aficionados of high-end digital effects won't see anything especially new in "RA. One," which rates about a B on the Michael Bay scale, but there is a terrific sequence when G. One has to run sideways along a runaway passenger train, ending in the complete destruction of a Victorian-era train station. (A strikingly similar scene appears in Martin Scorsese's upcoming "Hugo," and they're likely both recalling this real-life disaster.

I make no claims for "RA. One" as great cinema, and director Anubhav Sinha displays no particular vision, beyond that of a general who's kept his enormous army moving in roughly the right direction. (Sinha and five co-writers, Shahrukh Khan among them, get credit for the story and screenplay.) What makes this movie worth seeing is its blend of aesthetic and technical approaches -- some of the crew and special-effects team was Western -- its immense scale and abundant confidence, and its utter shamelessness in trying to entertain nearly all imaginable viewers, from Abu Dhabi to New Jersey to Zanzibar. If you're bored by the action scenes or the love story or the dopey domestic comedy, just wait three minutes for something else to come along -- and whoever you are, you won't be bored by the musical numbers!

Hollywood has entirely abandoned that quest to embrace all comers in its single-minded focus on the young, male-dominated blockbuster audience, and not a single American film released this year at this budget level has made me laugh out loud and stomp my feet and yearn to leap from my seat and shake it quite the way this admittedly idiotic Indian movie did. (It definitely didn't hurt that the New York preview screening I attended resembled an enormous family banquet, with catered Indian food, long speeches and wandering small children -- the movie started more than half an hour late.) It's hard to resist the conclusion that what has happened in industry and commerce and finance is also happening in pop culture. Hollywood has lost confidence, and may soon lose its grip on global preeminence -- and a new leader, in what we used to call the "developing world," is almost ready to take over.

"RA. One" is now playing in theaters worldwide.