Rich Hollywood comedians stick it to the man, in an empty-headed but entertaining Brett Ratner comedy 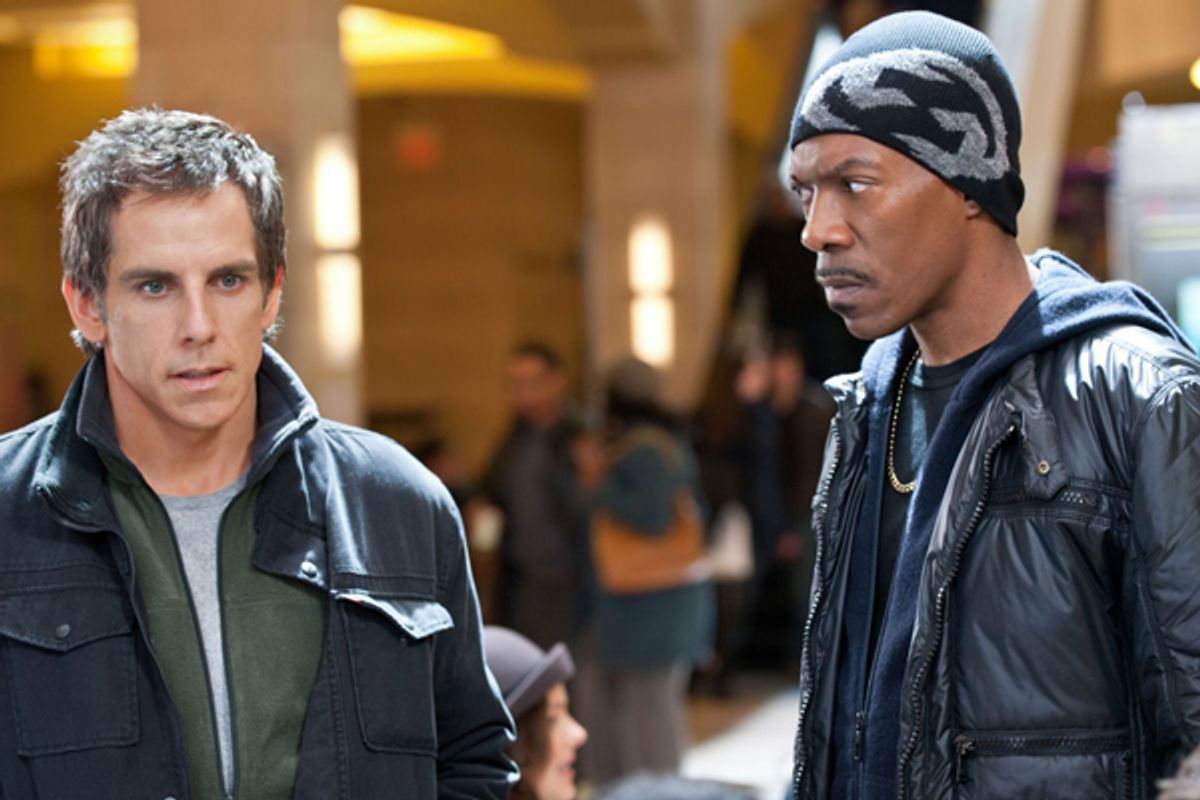 It isn't just Hollywood that's built on hypocrisy. Indeed, when you consider the breathtaking mendacity of American public life, in which competing tribes of millionaires claim to speak for the common man, people like Brett Ratner and Eddie Murphy and Ben Stiller look as pure as the driven snow. Still, it's pretty rich, in the current context, to see class war brought to the big screen with Stiller and Murphy, two of Tinseltown's wealthiest imperialists, as the exploited working stiffs who seek criminal revenge against an abusive tycoon in "Tower Heist." I suppose we've always wanted our celebrities and potentates to seem authentic and relatable, on one level, but also to lead lives of unimaginable excess. To put it another way: Don't cry for me, Argentina.

"Tower Heist" doesn't have half the agenda of, say, Andrew Niccol's futuristic Justin Timberlake thriller "In Time," which already has about half an agenda. This is a heist caper flick for viewers who found "Ocean's Eleven" and its sequels too boring. (Actually, the original concept here was purportedly an African-American "Ocean's"-type movie starring Murphy and Chris Rock, and I'm sort of sorry that didn't get made.) The screenplay -- which is by the now-customary five-headed Hollywood hydra; go look 'em up -- bounces off a few real-world events, like Bernie Madoff's Ponzi scheme and the career of Donald Trump, but the plot is 110 percent nonsense and an excuse for lots of genial goofballing and vulgar bling, which is what we all came for.

We actually get one of Stiller's more likable roles and Murphy's funniest in several years, which is definitely damning with faint praise in both cases. Their inept criminal gang also features modestly amusing turns from Casey Affleck, Michael Peña and Gabourey Sidibe, along with Matthew Broderick as a depressed Wall Street dude whose $5 million apartment has been repossessed. Alan Alda nearly steals the show as evil but folksy zillionaire Arthur Shaw, who regales his luxury condo tower's staff with tales of his days shoveling horseshit at Aqueduct racetrack. (He reminds me of Jimmy Breslin's description of Ronald Reagan as a guy who would give you the shirt off his back, and then go sign a law that repossessed it.) But it's the underutilized Téa Leoni who really does steal it, in a brief but juicy role as an FBI agent with a healthy extracurricular appetite. "You have Steve McQueen's Ferrari in your living room?" she tells Shaw in disbelief. "And here I thought you were an asshole!"

Ratner, a producer-director best known for the hugely successful "Rush Hour" trilogy, takes consistent abuse from comics fans for his near-destruction of a beloved franchise with "X-Men: The Last Stand," and I'm struggling to find something contrarian to say in response. I suspect that Ratner's substantial personal fortune and no-doubt-beautiful Beverly Hills home help to soften the pain. Let's try this: He's a highly capable showman who knows how to balance action and comedy in ways that gratify an enormous audience. "Tower Heist" goes down pretty smooth if you absolutely, positively don't think about it. We're supposed to believe that Stiller's character, Josh Kovacs, still lives in his old Queens neighborhood despite managing a luxurious condo tower on Manhattan's Columbus Circle (yeah, it actually is Trump Tower, although the filmmakers have deleted the name), a job that would easily pay $150,000 or more. This way he still knows the cheerfully disreputable Slide, a local hustler who favors 'do rags and gold chains, played by Murphy with plenty of attitude and minimal redeeming characteristics.

It's nice to see Murphy come fairly close to cutting loose in a movie again, even if Slide is kind of a generic hoodlum who rates about a B-minus on the scale of funny Murphy characters. At his best, he's never hesitated to walk the knife-edge of racial stereotype, playing black people who exemplify all kinds of socially undesirable characteristics and making them seem real. Slide is neither a moral nor an ethical guy, but he's a genuine crackup and he's looking out for No. 1, which is the prime directive of American life, handed down by our forefathers. Most of the time, of course, Murphy doesn't appear to give a damn, and hasn't for years. Here are his non-"Shrek" roles of the 21st century: "Dr. Dolittle 2," "Showtime" (opposite Robert De Niro!), "The Adventures of Pluto Nash," "I Spy," "Daddy Day Care," "The Haunted Mansion," "Dreamgirls," "Norbit," "Meet Dave" and "Imagine That." It isn't just that there's maybe 1.4 worthwhile movies and a whole bunch of rock-sucking on that list; I had to look them up to confirm that they existed (and to remind myself that, in many cases, I personally saw them and can't remember them).

I went into this thinking that Ben Stiller was in a similar position of Focker-tized middle-aged stardom, but while he's made many terrible movies, there's really no comparison. I didn't personally find the "Night at the Museum" series all that hysterical, but the marketplace disagrees with me, as it does on the vastly more awful Focker franchise. But Stiller understands the value of mixing it up; he was very good (in a teeth-grating way) in Noah Baumbach's "Greenberg" and is making another film with Baumbach now. He also seems devoted to mocking his own celebrity in a way that obviously doesn't work for the more introverted Murphy, appearing as "Ben Stiller" in numerous films and TV series all the way back to a 1998 episode of "Dr. Katz, Professional Therapist." He clearly works all the damn time, which is pretty much the opposite problem from Eddie Murphy and makes dismal memories like "Starsky & Hutch" or "The Heartbreak Kid" fade away much more easily. (I do regret the fact that Stiller seems to have visited Ray Liotta's cosmetic surgeon.)

"Tower Heist" is funny in the way of so many Hollywood comedies, meaning that individual scenes are often crisply written and played, but the whole doesn't add up to anything. Shaw is a schmuck who's going to get away with massive fraud, so Josh and his co-workers, with Slide's so-called help, launch a crack-brained scheme to rip him off, despite their evident unsuitability for such a task. You don't want me to deliver a lecture about how the only kind of redress a movie like this can imagine for injustice is individual and material in nature rather than social or collective, do you? Didn't think so. There's a deliciously silly conversation about movies and another one about "running a gauntlet of lesbians," and some nice stunt work involving the Macy's Thanksgiving Day parade (which Ratner actually restaged for the film, balloons and all). "Tower Heist" will stick in your mind much better than any other recent Eddie Murphy film, which is to say that a month from now you'll still sort of remember it.