The roots of the UC-Davis pepper-spraying 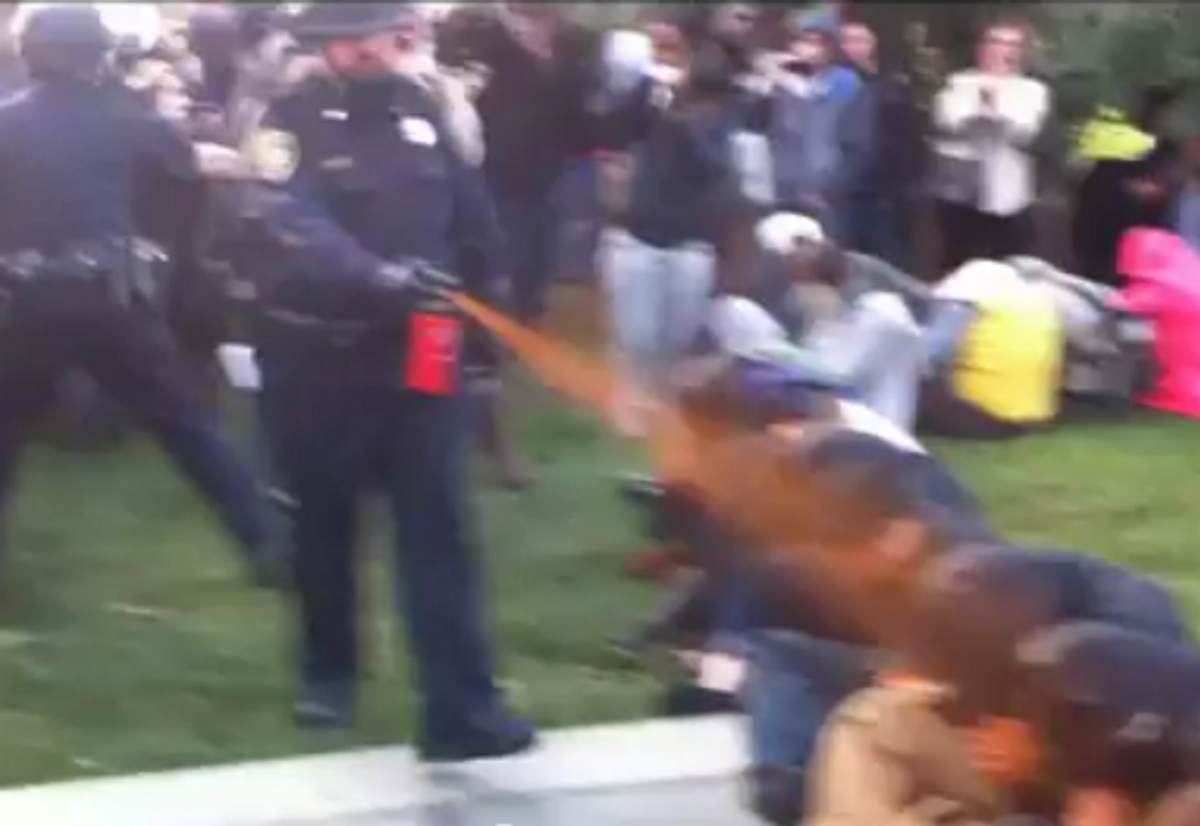 The now-viral video of police officers in their Robocop costumes sadistically pepper-spraying peaceful, sitting protesters at UC-Davis (details here) shows a police state in its pure form. It's easy to be outraged by this incident as though it's some sort of shocking aberration, but that is exactly what it is not. The Atlantic's Garance Franke-Ruta adeptly demonstrates with an assemblage of video how common such excessive police force has been in response to the Occupy protests. Along those lines, there are several points to note about this incident and what it reflects:

(1) Despite all the rights of free speech and assembly flamboyantly guaranteed by the U.S. Constitution, the reality is that punishing the exercise of those rights with police force and state violence has been the reflexive response in America for quite some time. As Franke-Ruta put it, "America has a very long history of protests that meet with excessive or violent response, most vividly recorded in the second half of the 20th century." Digby yesterday recounted a similar though even worse incident aimed at environmental protesters.

The intent and effect of such abuse is that it renders those guaranteed freedoms meaningless. If a population becomes bullied or intimidated out of exercising rights offered on paper, those rights effectively cease to exist. Every time the citizenry watches peaceful protesters getting pepper-sprayed -- or hears that an Occupy protester suffered brain damage and almost died after being shot in the skull with a rubber bullet -- many become increasingly fearful of participating in this citizen movement, and also become fearful in general of exercising their rights in a way that is bothersome or threatening to those in power. That's a natural response, and it's exactly what the climate of fear imposed by all abusive police state actions is intended to achieve: to coerce citizens to "decide" on their own to be passive and compliant -- to refrain from exercising their rights -- out of fear of what will happen if they don't.

The genius of this approach is how insidious its effects are: because the rights continue to be offered on paper, the citizenry continues to believe it is free. They believe that they are free to do everything they choose to do, because they have been "persuaded" -- through fear and intimidation -- to passively accept the status quo. As Rosa Luxemburg so perfectly put it: "Those who do not move, do not notice their chains." Someone who sits at home and never protests or effectively challenges power factions will not realize that their rights of speech and assembly have been effectively eroded because they never seek to exercise those rights; it's only when we see steadfast, courageous resistance from the likes of these UC-Davis students is this erosion of rights manifest.

Pervasive police abuses and intimidation tactics applied to peaceful protesters -- pepper-spray, assault rifles, tasers, tear gas and the rest -- not only harm their victims but also the relationship of the citizenry to the government and the set of core political rights. Implanting fear of authorities in the heart of the citizenry is a far more effective means of tyranny than overtly denying rights. That's exactly what incidents like this are intended to achieve. Overzealous prosecution of those who engage in peaceful political protest (which we've seen more and more of over the last several years) as well as rampant secrecy and the sprawling Surveillance State are the close cousins of excessive police force in both intent and effect: they are all about deterring meaningful challenges to those in power through the exercise of basic rights. Rights are so much more effectively destroyed by bullying a citizenry out of wanting to exercise them than any other means. These two short video clips -- regarding the openly abusive treatment of Bradley Manning and the extra-judicial attempt to destroy WikiLeaks -- are how I've been trying to make this point over the past month in the various speeches I've given around the country:

(2) Although excessive police force has long been a reflexive response to American political protests, two developments in the post-9/11 world have exacerbated this. The first is that the U.S. Government -- in the name of Terrorism -- has aggressively para-militarized the nation's domestic police forces by lavishing them with countless military-style weapons and other war-like technologies, training them in war-zone military tactics, and generally imposing a war mentality on them. Arming domestic police forces with para-military weaponry will ensure their systematic use even in the absence of a Terrorist attack on U.S. soil; they will simply find other, increasingly permissive uses for those weapons. Responding to peaceful protests and other expressions of growing citizenry unrest with brute force is a direct by-product of what we've allowed to be done to America's domestic police forces in the name of the War on Terror (and, before that, in the name of the War on Drugs).

The second exacerbating development is more subtle but more important: the authoritarian mentality that has been nourished in the name of Terrorism. It's a very small step to go from supporting the abuse of defenseless detainees (including one's fellow citizens) to supporting the pepper-spraying and tasering of non-violent political protesters. It's an even smaller step to go from supporting the power of the President to imprison or kill anyone he wants (including one's fellow citizens and even their teenaged children) with no transparency, checks or due process to supporting the power of the police and the authorities who command them to punish with force anyone who commits the "crime" of non-compliance. At the root of all of those views is the classic authoritarian mindset: reflexive support for authority, contempt for those who challenge them, and a blind faith in their unilateral, unchecked decisions regarding who is Bad and deserves state-issued punishment.

It's anything but surprising that a country that has cheered as its Presidents seize the most limitless powers against allegedly Bad People -- all as part of the ultimate instrument of citizen degradation: Endless War -- cheer just as loudly when that same mindset is applied at home to domestic trouble-makers. The supreme threat has never been from foreign Terrorists, but rather from what was done by our own public- and private-sector authorities (and the mentality they successfully implanted) in their name.

(3) Beyond the light it is shedding on how power is really exercised in the U.S., this UC-Davis episode underscores why I continue to view the Occupy movement as one of the most exciting, inspiring and important political developments in many years. What's most striking about that UC-Davis video isn't the depraved casualness of the officer's dousing the protesters' faces with a chemical agent; it's how most of the protesters resolutely sat in place and refused to move even when that happened, while the crowd chanted support (this video, taken from a slightly different vantage point, vividly shows this, beginning at 4:15). We've repeatedly seen acts of similar courage spawned by the Occupy movement.

It was the NYPD's abusive pepper-spraying, followed by Mayor Bloomberg's lawless destruction of the Zuccotti Park encampment, that prompted far more people than ever to participate in the next march across the Brooklyn Bridge. A tear gas attack on Occupy Oakland was followed by a general strike of 20,000 people. And this truly extraordinary, blunt and piercing open letter demanding the resignation of the heinous UC-Davis Chancellor Linda P.B. Katehi was written by a young, untenured Assistant Professor -- Nathan Brown -- who obviously decided that his principled beliefs outweigh his careerist ambitions.

This is the most important effect of the Occupy movement: acts of defiance, courage and conscience are contagious. Just as the Arab Spring clearly played some significant role in spawning, sustaining and growing the American Occupy movement, so too have the Occupy protesters emboldened one another and their fellow citizens. The protest movement is driving the proliferation of new forms of activism, citizen passion and courage, and -- most important of all -- a sense of possibility. For the first time in a long time, the use of force and other forms of state intimidation are not achieving their intended outcome of deterring meaningful (i.e., unsanctioned and unwanted) citizen activism, but are, instead, spurring it even more. The state reactions to these protests are both highlighting pervasive abuses of power and generating the antidote: citizen resolve to no longer accept and tolerate it. This is why I hope to see the Occupy movement -- even if it adopts specific demands -- remain an outsider force rather than reduce itself into garden-variety partisan electioneering: in its current form, it is demanding and re-establishing the indispensable right of dissent, defiance of unjust authority, and sustained protest.

UPDATE: Regarding the last point -- the uniquely effective, inspiring activism this movement is spawning -- here is video of Chancellor Katehi walking to her car while being forced to confront a wall of silent condemnation and shaming. It's not the accountability she should face (firing), but one can see from this video that it's quite potent nonetheless; moreover, it really reveals who the actual threats are to public safety -- not the protesters but rather those using force against them: