A star you've never heard of in a fake 1920s movie -- can this really be Oscar bait? See it and find out 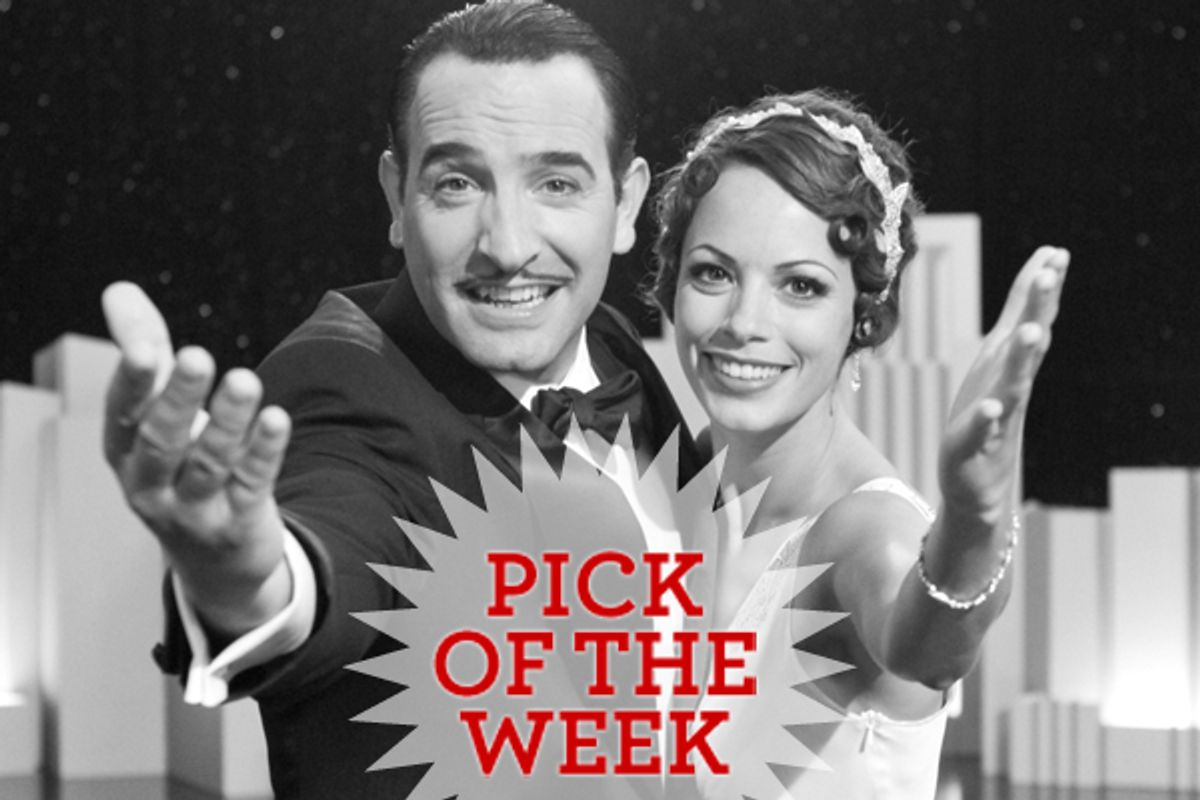 Jean Dujardin and Bérénice Bejo in "The Artist"
--

When French director Michel Hazanavicius' new film "The Artist" premiered last spring at Cannes, Harvey Weinstein snatched up the United States rights and a handful of prognosticators pronounced it an Oscar candidate. That sounded far-fetched at the time, and maybe still does. But save your derision until after you see the movie, a project so idiosyncratic, so unlikely, so simultaneously innocent and sophisticated that it could only have been devised by the French. Furthermore, "The Artist" is also an outrageous and nearly impossible amount of fun, which is not a concept Americans much associate with French films -- and that's the factor that may put the movie and its lantern-jawed, meta-handsome leading man, Jean Dujardin, in this winter's awards race.

Unless you’re a fan of the alternate film universe that is French comedy, and specifically the recent “OSS 117″ spy spoofs, you’ve never heard of either Hazanavicius or Dujardin. But the qualities that would seem to make their movie supremely unmarketable are also its strengths. "The Artist" is in black-and-white. It’s not merely a silent film -- well, at the risk of issuing a spoiler, let's say it's almost a silent film -- but one that both imitates and spoofs the Silent Age dramas of the late 1920s, movies that hardly any living people have actually sat through. That’s at least three strikes against the film, possibly four or five -- but ever since that Cannes premiere, audiences at festivals around the world have responded to "The Artist" rapturously and uproariously. Not everyone will like it that much, undoubtedly, but if you do, it's the kind of movie you'll tell all your friends about, and drag them back to see if they seem reluctant.

“The Artist” of the title is a huge silent-era star named George Valentin, played indomitably by 39-year-old Dujardin, sailing into the winds and tides of 1920s Hollywood with his ship’s figurehead of a face. In Hazanavicius' giddily postmodern "OSS 117" movies, Dujardin plays Hubert Bonisseur de la Bath, the chauvinistic, xenophobic and generally clueless 1960s superspy who's like the Gallic bad conscience of James Bond (and seems to have unresolved and unconscious sexual-identity issues to boot). An irresistible presence both on-screen and in person -- he had the Cannes press corps eating out of his hand -- Dujardin has jokingly described himself as the poor man’s Sean Connery, which is funny but not entirely fair. He's more like the Monty Python version of Connery, or Connery cranked to 11. Dujardin doesn't speak much English, which may be the only thing that's kept Hollywood scouts away from him so far. After this performance I'm pretty sure that any agent in the business would happily spring for any combination of Berlitz and Rosetta Stone in which he'd care to partake.

With his jutting jaw, sleek hair and pencil-thin mustache, Dujardin’s George comes uncannily close to Douglas Fairbanks, and like him dominates the silver screen as a series of dashing adventurers in nearly identical international espionage scenarios, which Hazanavicius recaptures in delicious and affectionate detail. George has a beautiful wife, an enormous house in the Hollywood hills, and a loyal dog who co-stars in his films (and who will provide any number of "awww" moments later on). He has a minor flirtation with an up-and-coming flapper-flavored extra named Peppy Miller (the irresistible Bérénice Bejo). In giving Peppy her first break, he never foresees that she will soon surpass him. George’s studio is overseen by an avaricious exec played by John Goodman (who would have been huge in the silent era, based on this evidence), who has to break the grim technological news: The talkies are coming in, and George is yesterday’s copy of Photoplay.

True to his naive and optimistic nature, George believes that the public loves him and that talking pictures are a shallow fad. Sic transit gloria mundi, bub. “The Artist” is perhaps less deliriously enjoyable after it switches from its early romantic-comedy mode to the ensuing Theodore Dreiser-style melodrama of George’s fall into alcoholism, bankruptcy and disaster. (While Peppy, of course, becomes America's borderline-insipid sweetheart.) But that too is very much in the spirit of the movies it emulates, which packed two or three genres into a single picture. Hazanavicius loads the picture with laughs, charm and surprises, along with glorious Los Angeles locations. I've got three words for you: Tap-dancing numbers. I said tap-dancing numbers! (Or is that really just two words?) "The Artist" finishes with a terrific bang, and positively bursts with affection for an era of American cinema and culture that Americans have all but forgotten. (Hazanavicius could have used an actual American on set during the shoot: Some of the English intertitles and supporting materials -- magazine and newspaper articles -- are either unconvincing or flat-out wrong.) In the long and fraught history of Franco-American cultural relations, this movie is more than a peace offering; it’s a loving, goofy, joyous French kiss.

"The Artist" opens this week in major cities, with wider release to follow.

France Movies Our Picks The Artist