Why is Hollywood still terrified of abortion?

Forty years after Roe, abortion's so traumatic in films that it leads to suicide -- and teens deliver half-vampires 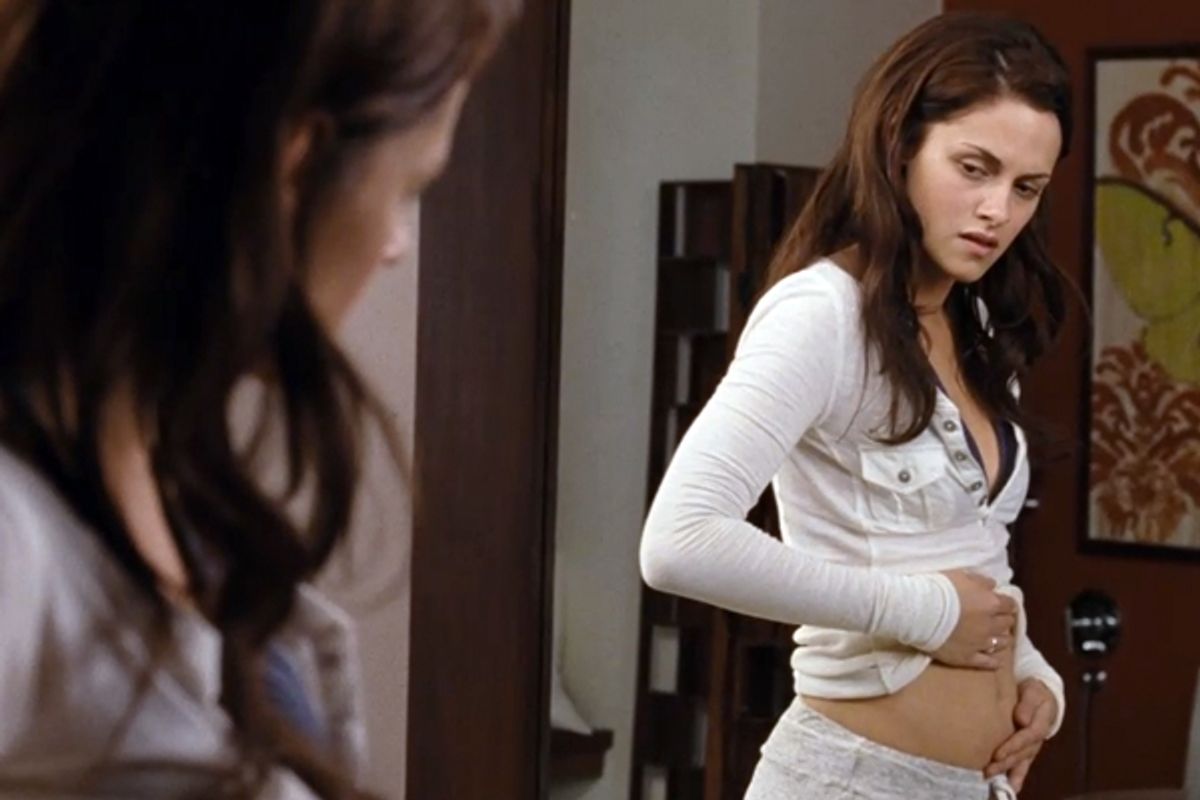 Of course Bella would keep Edward's baby. Dammit, she loves her sparkly vampire husband. She doesn't care about the concerns of her family and friends, their pleas that she consider the risks of carrying a hellspawn to term. Like Julia Roberts' saintly, ill-fated Shelby in "Steel Magnolias," who pursues a pregnancy because she "would rather have 30 minutes of wonderful than a lifetime of nothing special" (and subsequently dies for it), Bella knows it's her body, her choice. And a "Twilight" franchise dreamed up by a nice Mormon lady isn't going to include a scene of newlywed, saved-herself-for-the-wedding night Bella trotting down to Planned Parenthood for a quickie D&C. No, her devotion to life is so great that it extends to life that isn't even quite human.

Authentic to its characters as it may be, the gruesomely traditional blockbuster "Breaking Dawn" illustrates an unavoidable reality of contemporary cinema — that whether you're in the mysterious realm of vampires or the corridors of power, normal, untraumatic abortion barely exists. Consider the movie offerings of just the past few years. In "The Last King of Scotland," a clandestine attempt at abortion leads to a harrowing murder. In "Waitress," Keri Russell hates her life and her abusive husband, but plunges on with an unwanted pregnancy. More recently, in George Clooney's "The Ides of March," a pregnancy and hush-hush abortion lead to a tragic suicide. And in "Crazy Stupid Love," middle-aged Steve Carell's Cal admits he and his estranged wife got married in the first place when she became pregnant – because apparently the option of not being pregnant never occurred to anybody. As Stephen Farber noted last year in the Daily Beast, movies like Ben Stiller's "Greenberg," which depict abortion as a matter-of-fact reality of many women's lives, are few and far between.

When abortion does turn up in the movies, it's likelier to be in the context of a riskier, more dramatic time and place, a gambit known to cinephiles as the "Dirty Dancing" plot device. Mike Leigh's "Vera Drake"  gave us a reassuring, pre-feminist abortionist in postwar Britain. Lasse Hallstrom's "Cider House Rules" was a similarly nostalgic take on that whole bygone, "girl in trouble" era. And  "4 Months, 3 Weeks, and 2 Days" offered abortion as, in the words of Salon's Andrew O'Hehir, a "carefully plotted thriller" in '80s-era Eastern Europe.

The surplus of movie and television pregnancies can't all be attributed to some great Mormon conspiracy, though. An abortion is an action. A baby is a whole story line. "Juno" wouldn't have had a whole lot going for it if the Ellen Page character had ignored her classmate's warning that her fetus already had fingers. And had "Knocked Up"  gone in the direction of what one character describes as "rhymes with smashmortion," it would have been 15 minutes long.

Yet it's hard not to note a not-so-faint whiff of judgment in all the tiptoeing around a procedure that 40 percent of American women undergo in their lifetimes.  Sure, two-thirds of unwanted pregnancies in real life end up in abortion, but cinematic women who do it tend to wind up dying. Those who carry to term, meanwhile, are plucky heroines. And it's not just the movies. Consider the entire premise of "American Horror Story" – a show that hinges on the rampant evil unleashed because an L.A. doctor did abortions in his basement back in the day. In present time, meanwhile, our brave heroine Vivian is continuing her pregnancy despite the fact that at least one of her babies apparently has hooves. Come on, even fans of "Personhood" amendments would give that one a pass.

Without her plot-enhancing, eminently true to the character pregnancy, Bella Swan would not be the Bella her fans have come to know and love. But until our entertainment broadens out and reflects our reality, abortion will be viewed as an aberration instead of the commonplace reality it is. Not every pregnancy winds up with a baby -- even a half-vampire or Antichrist baby -- in a woman's arms, nor every abortion with a bloody corpse in a back alley. Safe, legal smashmortion happens.  And nearly 40 years after Roe v. Wade, it's absurd that supposedly progressive Hollywood remains so backward about acknowledging it.

Abortion The Ides Of March Twilight