The philosopher is a living parody of a blowhard foreign intellectual 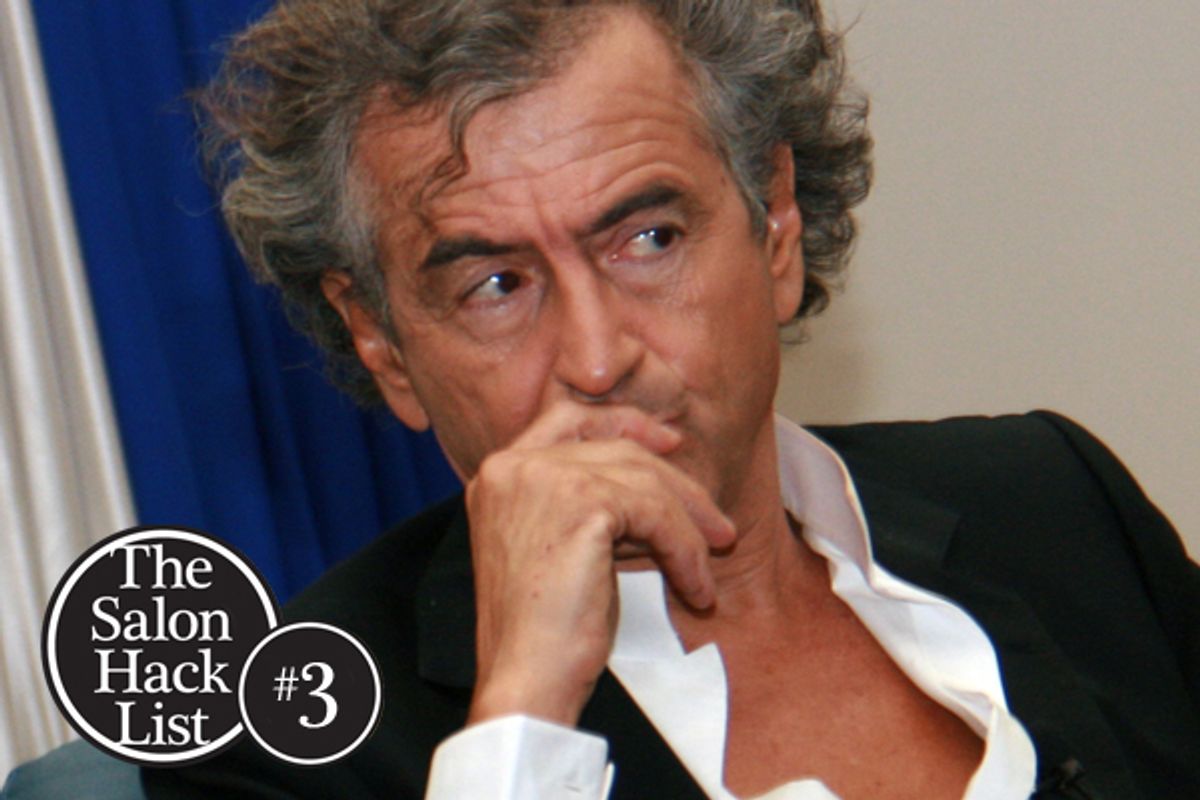 One upside to America's frothing populist hatred of intellectuals is that we don't produce many Bernard-Henri Lévys. Unfortunately, we tend to take other nations' tedious, fame-seeking big thinkers far too seriously. I think our magazine editors are seduced by accents -- it's the only explanation for why they keep trying to sell us "BHL" and Niall Ferguson.

So BHL, the famous and wealthy French philosopher, gets assigned to travel across America for the Atlantic, and produces the laundry list of clichés you'd expect: We're all fat and religious and we worship the flag and baseball.

BHL the intrepid reporter writes a book on the killing of Daniel Pearl, and it's rife with errors and prejudice.

He's prospered in intellectual circles despite his tragic inability to button a shirt in part because he's a successful businessman, born into wealth and friends with the French corporate elite. He writes with the self-assuredness of someone quite convinced of his brilliance, and that self-assurance perhaps explains why he so regularly makes shit up and gets shit wrong.

Like, for example, claiming that Himmler, who killed himself, stood trial at Nuremberg. And citing a well-known fake satirical philosopher in a book.

For a taste of the sort of hackneyed, half-assed work he produces on the major issues of the day, try this item on the eurozone crisis. It's the sort of inane nonsense that gives claptrap a bad name. BHL noticed that the crisis involved Greece and Italy and that made him excited because he could then write about how civilization was invented in those places. To understand the European debt crisis, apparently, "we should be rereading Gibbon, Humboldt, or even Polybius -- these theoreticians of the fate and the fall of the Athenian paradigm or the Roman road -- rather than Friedman or Keynes." Actually I think in this particular instance Friedman or Keynes would be a bit more helpful?

As if being pompous, self-serious, self-important and lazy weren't enough, he's also the public face of not one but two campaigns dedicated to defending powerful men against rape accusations. He organized a petition decrying Roman Polanski's extradition to the United States to face prison for jumping bail after being convicted of raping a child years ago. Polanski didn't deserve to go to jail, according to BHL, because he is a very good filmmaker.

Then BHL's dear friend Dominique Strauss-Kahn was arrested for raping a hotel maid, and BHL wrote a truly astounding column defending his friend by attacking the victim and decrying the American justice system for not providing adequate special treatment to a man as rarefied and well-respected as Strauss-Kahn.

"What I do know is that nothing in the world can justify a man being thus thrown to the dogs," BHL said of the totally standard treatment of Strauss-Kahn following his arrest for rape.

HACKIEST 2011 MOMENT:
After the charges against Strauss-Kahn were dropped due to unknown inconsistencies in the accuser's story, BHL declared victory and claimed that Strauss-Kahn was the victim of "torture" due to his class, and his being French.

I must state, to be clear, that I don’t think it has much to do with this worldwide religion and delirium that is anti-Semitism. But what I do believe is that this is the appearance of a new variation on Maurice Barrès’s phrase that has become, “That X—in this case Dominique Strauss-Kahn—is guilty, I deduce not from his race, but from his class.”