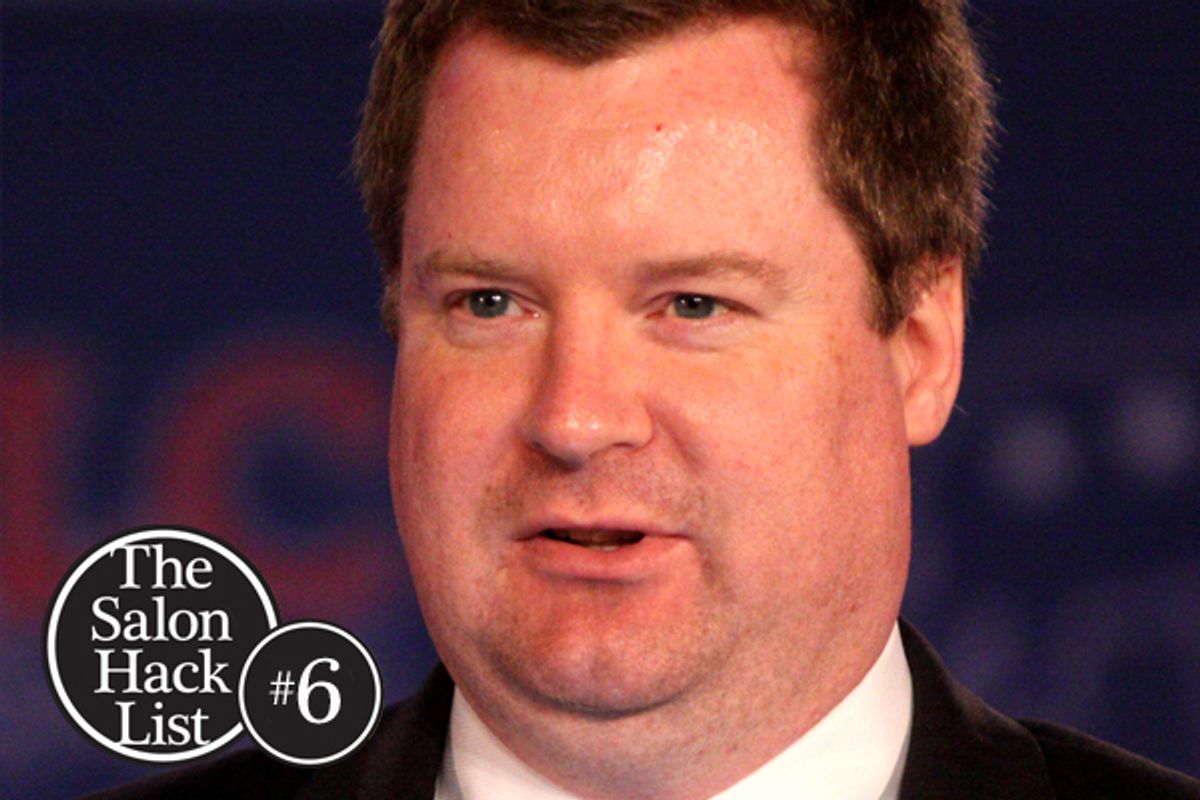 Erick Erickson is a generic right-wing blogger whose only notable quality as a commentator is his cowardly unwillingness to stand behind the various vitriolic things he says and writes. He's not a good writer or interesting thinker or particularly funny or savvy. His idea of a good gag is calling David Souter a "goat-fucking child molester" and then deleting that tweet and then hastily rewriting it when he got called on it and then crying to Howard Kurtz that he regretted ever writing it.

Even the many vile and stupid things he says are repetitive and predictable. He's called Barack Obama a Nazi on multiple occasions, for crimes like "criticizing the insurance industry" and "wanting to host the Olympics." Who can forget the time he idly wondered when citizens would "march down to their state legislator's house, pull him outside, and beat him to a bloody pulp" over a Washington state proposal to regulate phosphates in dishwasher detergent? That's quality political analysis right there! No wonder CNN hired him!

When he's not hyperbolic and violent, he's just wrong and lame.

And it gets no lamer or wronger than the "We are the 53% movement," a stillborn, inadvertently hilarious right-wing response to Occupy Wall Street involving self-proclaimed members of the producer class crowing about their Randian productivity while decrying everyone else as leeches. The name was taken from the premise that "only" 53 percent of Americans pay taxes, which is true only of federal income taxes, and is true only because there are a lot of poor Americans, and a few lucky Americans who are skilled at taking advantage of Republican-supported tax loopholes.

Erickson led off the "53%" movement by declaring that he "works three jobs," at least two of which are simply spewing a never-ending stream of risible bullshit. Other contributors to the "We are the 53%" site included a number of people who were clearly not in the 53 percent, being apparently unaware that they were clear beneficiaries of government social spending, or in one instance, being a dog.

HACKIEST 2011 MOMENT:
Surprisingly, not his 53 percent activism. The hackiest thing Erick Erickson did all year was withdraw support from an insurgent GOP candidate because his rich bosses are personal friends of George Allen. That's the sign of a true careerist hack right there.
- - - - - - - - - -
(Read the introduction here. Read the 2010 Salon Hack 30 List here.)