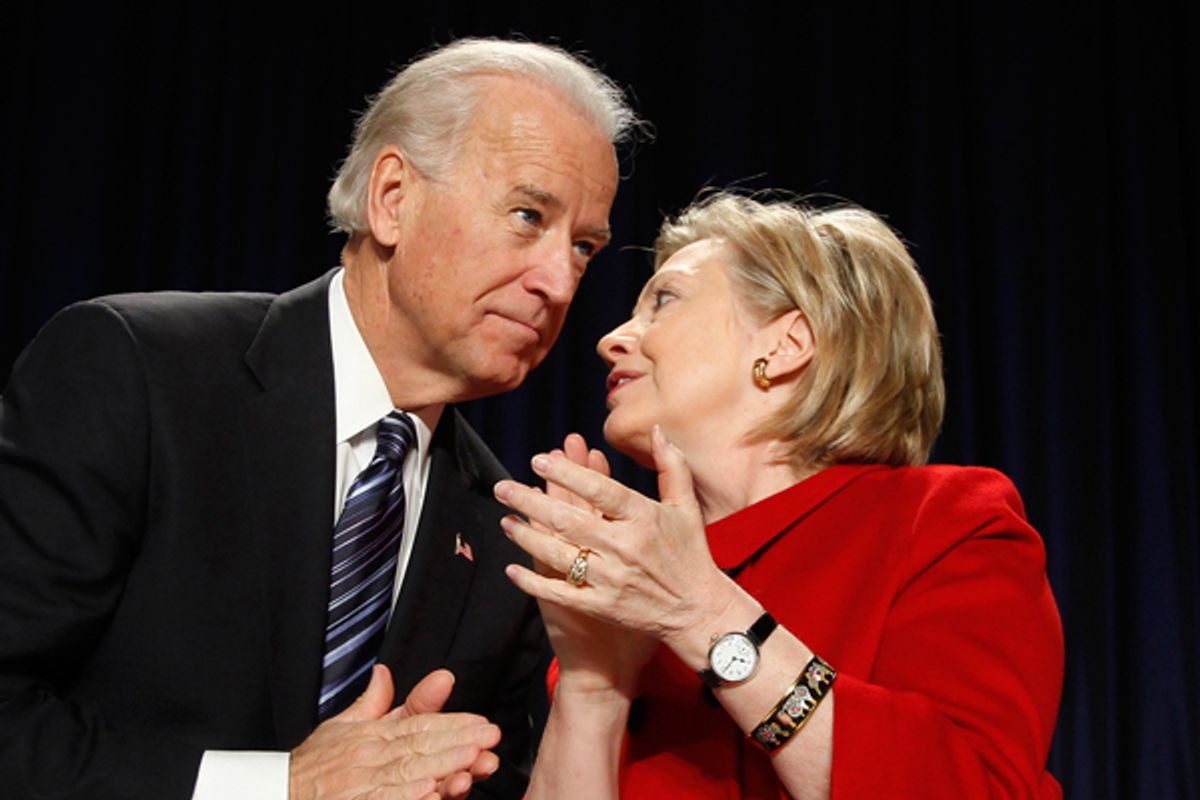 The former New York Times editor has lately been celebrating his return to writing by fearlessly tackling hacky column ideas already exhausted by everyone who was writing bad opinion columns during Keller's tenure as a person with an actually important job. Having offered his own takes on classics like "The Huffington Post isn't as good as a real newspaper" and "Twitter is dumb," Keller today tries the old "running mate switcharoo" scenario.

John Heilemann made the case in August of 2010, but Bob Woodward really kicked it off by pretending a Biden-Clinton switch was "on the table" in October of 2010. That notion -- supposedly -- can be traced back to pollster grifter Mark Penn, which should have stopped anyone else from bringing it up ever again. But Jonathan Alter took another crack at it last October, and publishing speculation on the switch has become reliable Drudge-bait ever since.

Keller's column frames the switch as something wished for, instead of predicting it based on the "chatter" of "insiders," which helps make it merely stupid instead of inherently dishonest. But here are his arguments as to why it would be a good idea instead of a bizarre and desperate stunt:

One: it does more to guarantee Obama’s re-election than anything else the Democrats can do. Two: it improves the chances that, come next January, he will not be a lame duck with a gridlocked Congress but a rejuvenated president with a mandate and a Congress that may be a little less forbidding. Three: it makes Hillary the party’s heir apparent in 2016. If she sits out politics for the next four years, other Democrats (yes, Governor Cuomo, we see your hand up) will fill the void.

One: What? Prove it, maybe? Two: Haha what, again? Congress will get ungridlocked if the president switches vice presidents? To a Clinton? Three: OK, but what if Obama/Clinton loses? And if Obama wins again wouldn't any Democrat be at a disadvantage in 2016 due to historical trends anyway, making it a "safer" bet to not be his running mate, assuming she actually wants to be president still, which is not at all a given?

But we're not dealing with observable reality here, as the bit about Clinton's magical power to un-gridlock Congress demonstrates. We're in the world of vague assertions about "warmth" and "voltage." How many electoral votes would running mate Hillary Clinton be worth? Keller never bothers to attempt to make a quantitative guess. This is the closest we get:

Moreover, even if Obama can win without Hillary, there’s a lot to be said for running up the score. If she can do in 2012 what Obama did in 2008 — animate that feeling of historic possibility — the pair can lift some House and Senate candidates along with them. One reason Republicans did so well in the 2010 Congressional elections is that they overcame the gender gap and carried women voters 51 to 49. Those voters will flock back to Hillary, the more so if the Republican ticket is locked into a culture-war agenda. So, by the way, will Hispanic voters, securing such endangered states as Florida, New Mexico, Nevada and Colorado.

Ooh, actual data! The Republicans won women in a midterm election. Hillary Clinton is a woman. So in a presidential general election, women will "flock back to Hillary." Those women may be Republicans, voting in a Republican wave election, but they are women and so they will vote for Barack Obama if he is next to a woman on the ballot. (Though what about those Hispanics? Shouldn't Obama replace Biden with a Hispanic woman, in this case? Or isn't he in fact best off retaining Joe Biden, who is, after all, a white man? From Scranton? White men will "flock back" to Obama once they see that he is friends with a white person.)

The column isn't just bad analysis -- it's also oddly condescending to Secretary Clinton! It complains that she owes "us" a vice-presidential run after she "raised our expectations" by running for president last time. It calls Clinton "the dutiful Methodist schoolgirl."

Here's the line that is secretly the worst:

But the idea that she should replace Joe Biden as Obama’s running mate in 2012 is something else. It has been kicking around on the blogs for more than a year without getting any traction, mainly because it has been authoritatively, emphatically dismissed by Hillary, Biden and Team Obama.

Did you see that? "Kicking around on the blogs." That's Keller-speak for "not worth anyone's time until a real journalist like New York Times opinion columnist Bill Keller brought it up." The "bloggers" kicking this idea around, as I mentioned earlier, are New York magazine political writer John Heilemann, Washington Post living legend Bob Woodward, and former Newsweek senior editor and best-selling author Jonathan Alter. Those bloggers and their crazy notions!

As a blogger, I know that my silly opinion is not as carefully considered and well-informed as that of former New York Times editor Bill Keller, who is not at all simply talking out of his ass. But even if there were any hint at all that the switch was a possibility, which there isn't, it would be a stupid idea. Hillary Clinton is already part of the president's Cabinet, and she and her husband will already campaign for the president's reelection. Running mates barely nudge the numbers in presidential elections, unless they're historically awful, which Joe Biden isn't. The Clintons are among the most divisive figures in American politics -- Hillary Clinton's recent high approval rating has come because she's not running for anything -- and relitigating every Clinton scandal would consume the national political press for weeks if she ended up on the ticket.

The running mate switch hasn't been successful since the Franklin Roosevelt administration, and the last time a president made a strategic switch to help win a tough reelection, it failed.

And I bet if Obama did make this stupid switch, Bill Keller would write some awful column about how desperate it made the president look. Unless he will have by then moved on to finally writing his "kids today sure are sexting each other a lot" piece.