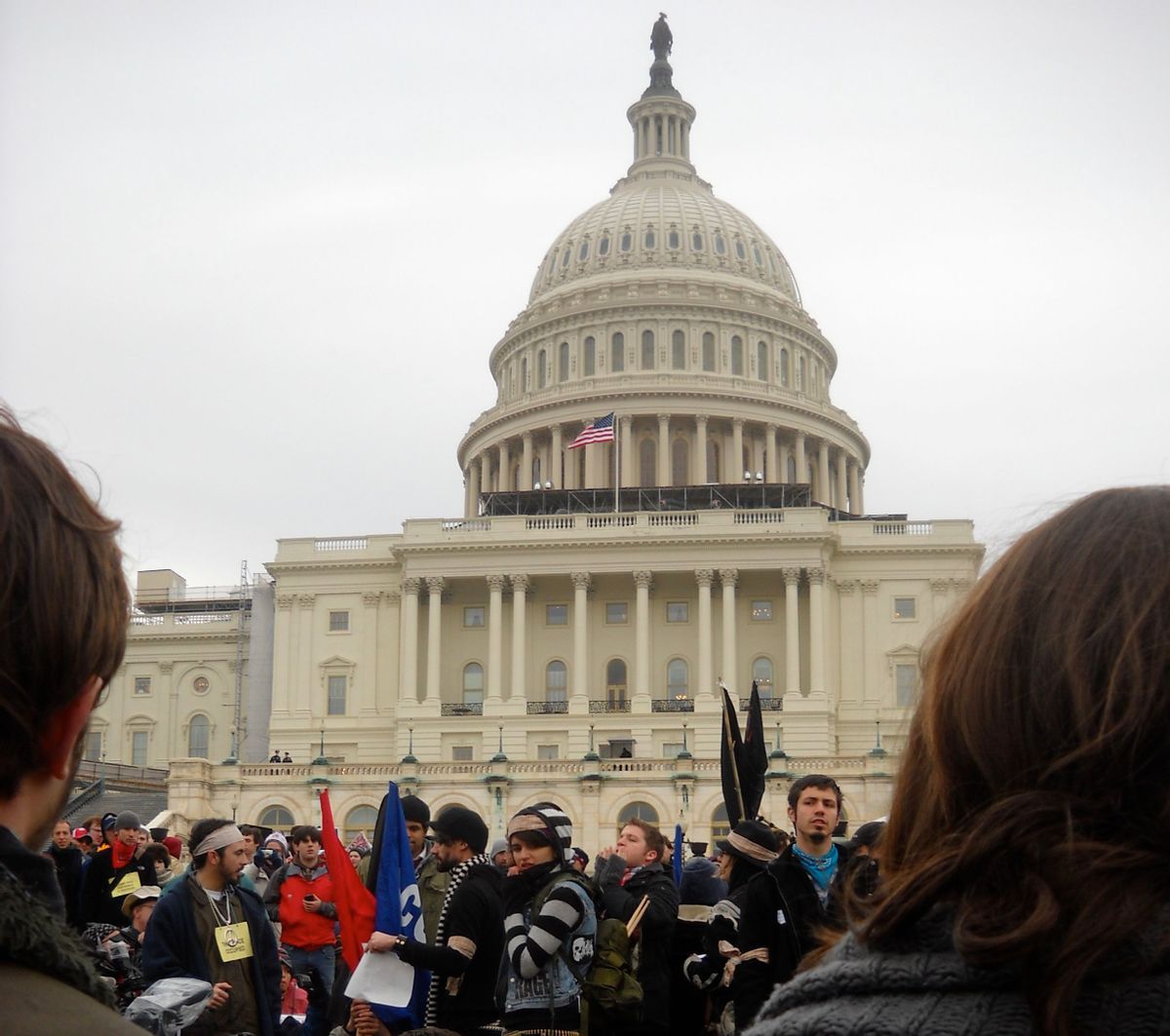 Hundreds of supporters of the Occupy movement from across the country greeted returning members of Congress on Tuesday with a chorus of mic checks, a blizzard of pinks slips, and an impolite message: "You don't represent 99 percent of the country."

Actually, the message was harsher than that at times. "No Masters, no Congress, no State," said one banner. "Fuck McCongress," said another. But many demonstrators, gathering under cloudy skies on the west lawn of the Capitol, said they had come in hopes of purging the national legislature, not burying it. Many cited record low levels of approval for Congress as the reason for coming.

In a massive general assembly, the differences between those who hope to work within the electoral system and those who refuse occasionally flared. When one man said he wanted to burn his voter registration card, many responded with wiggling fingers pointed down, the movement's gesture of disapproval.

Balancing these tendencies was a challenge for the event's organizers, who battled rumors that the event was sponsored by Van Jones, a former White House aide, who is mistrusted for embracing the Occupy Wall Street movement as a catalyst for change in the Democratic Party. Most of the participants had bigger goals.

"We need to get all of the corporate money out of Congress," said Jeanne van den Hurk, an artist and antiques dealer from South Carolina, who is running for the state's 3rd Congressional District. She said the crash of 2008 had driven more than 300 friends out of the antiques business. When Congress did nothing and then succumbed to what she called "the debt ceiling hostage crisis" last summer, she decided to run against Republican Jeff Duncan.

Van den Hurk was joined by Jonathan Greenberg, founder of BeYourGovernment.org, which seeks to recruit  congressional candidates who promise not to take any corporate contributions. Greenberg carried a stack of pink slips, which he planned to deliver individually to Congress members.

"Our message to them is, 'You've lost your job, but you can reapply,'" he said. "We just want you to promise not take any corporate contributions," said Greenberg, who claims to have enlisted 10 candidates in six states.

Daniel Barach, a financial services executive from New York, said he came to protest the "carried interest" tax provision, which enables professional investors such as Mitt Romney to pay just 15 percent on their earnings.

"I came because I'm disappointed that with a Democratic president and a Democratic Congress for two years, they did not close this loophole," Barach said. "Somebody needs to be held accountable."

During the assembly's lengthy discussion of tactics, the crowd was diverted by the sight of Capitol police detaining Ray Lewis, the retired Philadelphia police captain who became famous when his vocal support for Occupy Wall Street got him arrested in New York in November. The police let Lewis go a few minutes after determining he wasn't armed. Surrounded by admirers, Lewis said the police action was appropriate and "handled very professionally."

Asked if he had a message for the police, Lewis said, "Go watch the documentary 'Inside Job.' That'll tell you what's really going on."

As  the skies cleared and the protesters broke up into smaller groups to visit their congressmen, the spectrum of the movement opinion was on display again with black flag-wielding anarchists blocking the entrance to the Cannon House Office Building while others waited in line to go through the security checkpoint.

Justin Filtz, a professional poker player who is active in Occupy Phoenix, said he was hoping to meet with Republican Sean Duffy, who represents his hometown of Stevens Point, Wis.

"I want to ask him why he voted for NDAA [National Defense Authorization Act]," Filtz said. "I feel like they're only hearing one side when they're out here [in Washington]. They're closed off from their constituents."

Once inside, the protesters dispersed to different audiences where they met with chiefs of staff, legislative aides and receptionists.

In the Longworth Building Greenberg and a contingent of protesters marched on the office of House Speaker John Boehner. The door was locked and no one answered when they knocked. So they wrote Boehner a note telling him he had been laid off and wishing him "good luck" looking for a new job. They left the pink slip under his door and went on to their next meeting.