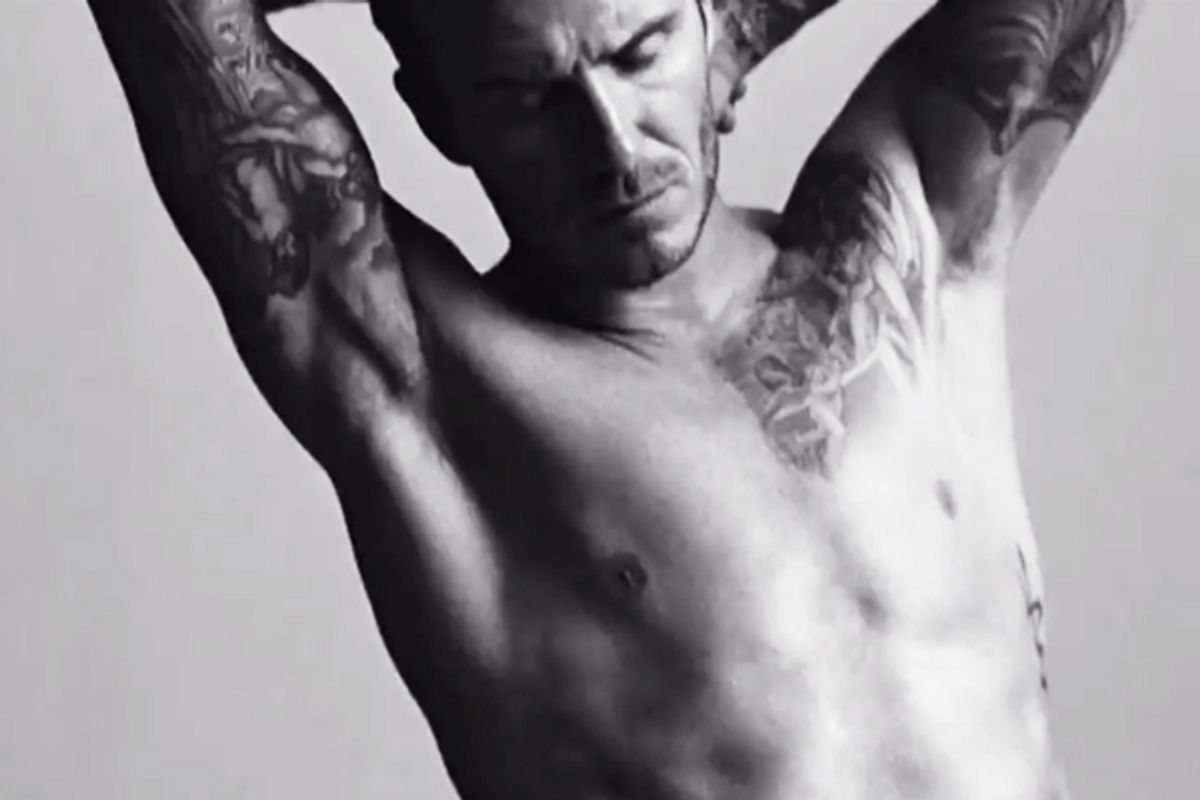 The Super Bowl is all about tradition. The chili and beer-soaked parties. The interminable, annoying half-time show. The parade of sexed-up, flesh-flaunting ads. But this year, there's a twist. This Super Bowl comes with a slice of beefcake. In a surprising move toward righting the gender scales, two of the most already-buzzed about Super Bowl ads feature dudes who are not pouring Doritos down their gullets or smirking as they speed around a racetrack. They're being sex objects.

For starters, there's Mr. Posh Spice, aka David Beckham, promoting his new line of bodywear for H&M. He flexes his numerous tattooed muscles to the tune of "Please Don't Let Me Be Misunderstood," glowers in an "I mean business here" way that's remarkably persuasive, and uh, I forget what I was talking about. To quote Emma Stone in "Crazy Stupid Love," SERIOUSLY? Just watch.

The notion of a hot, barely clad body that happens to be male in a Super Bowl ad has been, until now, nearly unheard of. But far more subversive than the Beckham spot is a Toyota one that really flips sex appeal expectations. In the spot, the car company boasts that after it reinvented the Camry, it decided to reinvent a few other things. Among its creations: a traffic cop who hands out speeding tickets but also invigorating massages, a motor-vehicles department where you can play pinball and get soft-serve ice cream, a blender that plays Lionel Richie, and of course, curtains made of out of pizza. But the real showstopper is Toyota's "reinvented couch." A nebbishy man opens his front door to discover his furniture has been transformed into a row of bikini-clad beauties, no doubt just waiting for him to park his rear upon their collective lap. It's your typical ad-agency-concocted dude fantasy, until the scene changes to a replica row -- this time of seven six-pack toting guys and the announcement that "It also comes in male" -- prompting the surprised homeowner to give a little shrug of approval.

Just two years ago, Super Bowl ads had been a slew of female-alienating, flat-out hostile spots that chided men for being pussywhipped and defiantly declared "Man's Last Stand." (Spoiler: They involved driving fast and not wearing pants.) But last year, the ads began to take on a decidedly less misogynistic tone. The most patently sexist ad back then was a Pepsi spot featuring an abusive female.

Make no mistake, there will still be plenty of old-fashioned T&A to go around during Sunday's commercial breaks. And you can always count on GoDaddy to be the company that asks the question, "Who won't notice a hot model in body paint?" But it seems that at last sponsors are catching on to the fact that nearly 46 percent of Super Bowl viewers are female, and that plenty of the game's male viewers are more inclined to be moved by a shirtless man than Danica Patrick. Sure, it's still objectification even if a guy is the object, but it does suggest our yearly parade of hormone-driven ads is tilting toward gender equity. Or as Toyota might express it: It's still the Super Bowl ad, but reinvented.