After polling its readers about retouching, Glamour vows to back off Photoshop 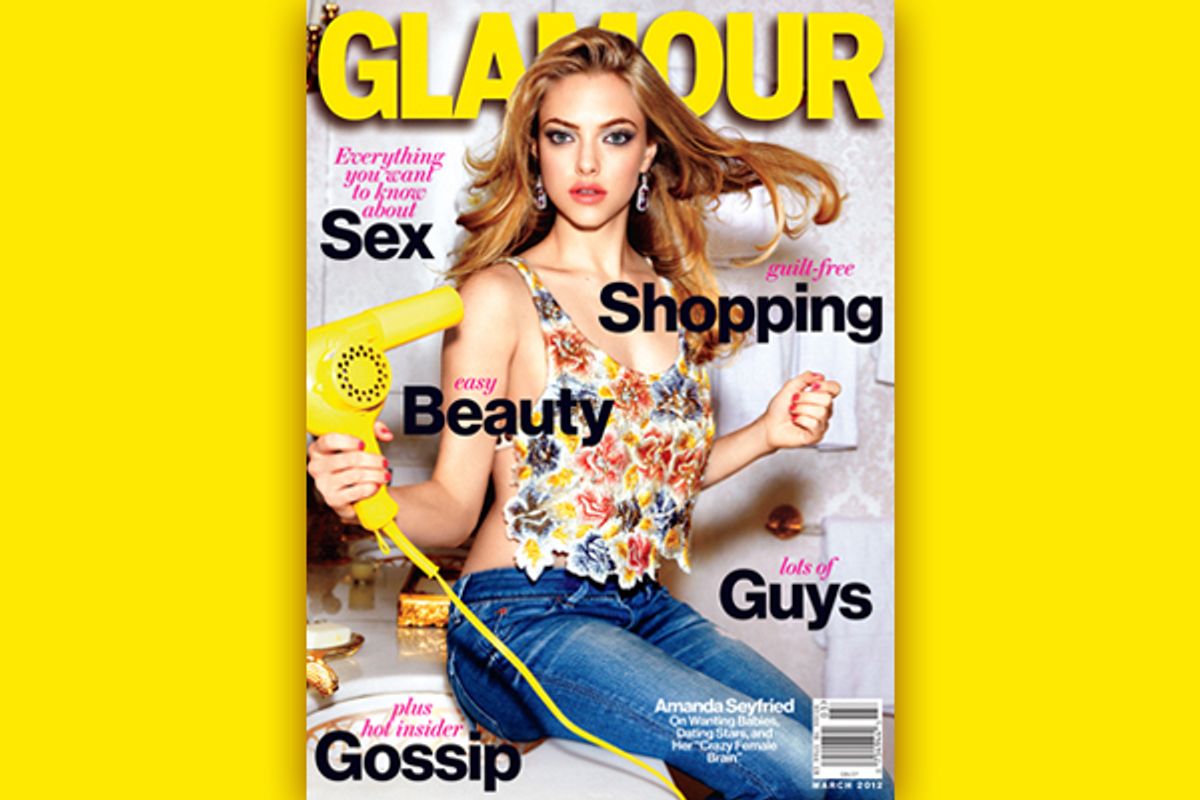 Retouching is like tequila. Sure, a little makes everybody look better. But go too far and you feel like puking. For years now, the media has struggled with how best to strike that pleasantly Cuervo-goggled balance, swinging wildly between science fiction-level Photoshopping and the self-congratulatorily unaltered. But as excessively sweetened-up images have come under increasing scrutiny – and been flat-out banned in extreme cases -- the industry is beginning to take its cue from the unlikeliest of sources: its audience. This week, Glamour magazine revealed what happened when it asked its readers "How much is too much?" retouching. And the over 1,000 reader responses paint an intriguing picture of how deep we're willing to go into the land of altered images.

How far to take retouching isn't just an issue for glossy magazines anymore. As Glamour points out, there are over "70 iPhone apps to help you alter your photos before you press upload" – and even more possibilities once the images hit your computer. Perhaps that's why Glamour readers are so comfortable with a little cleaning up here and there. The magazine reports that "Nearly 60 percent [of readers] feel it's OK for a woman to tweak her personal pictures." Moreover, a whopping "23 percent of women ages 25 to 29 do it; that number climbs to 41 percent among those ages 18 to 24." The younger you are, it seems, the less inhibited you'll be about retouching your image.

But readers are considerably less lenient when someone else is wielding the tools. "Only 43 percent of women said it was OK for magazines to retouch, and just 39 percent were comfortable with ads doing so." Why so schizo? Perhaps the results reflect a level of previously unacknowledged vanity and hypocrisy – some rampant trend of falsifying our personal images. Glamour certainly takes a dim view of it, getting Susie Orbach, author of "Bodies" and "Fat Is a Feminist Issue," to note, "It makes us think there must really be something wrong with us if we can’t even look as good as the average woman on Facebook."

But there's more to it. For one thing, unless you're blatantly faking your looks for a dating profile (PS don't), chances are whatever altering you do of your photos isn't in the service of selling somebody an unattainable bill of goods. It's one thing to be cool with zapping out a zit on a regular person's avatar, but it's another ball of wax entirely when a company is trying to sell a product based on an image that couldn't possibly exist in the real world. Just this week, the British Advertising Standards Authority yet again yanked a major cosmetics campaign, noting that a recent L'Oreal ad featuring Rachel Weisz "misrepresented the results that the product could achieve." And when magazines are peddling the fantasy that actresses are slinking into bikinis six weeks after delivering their twins, or, for that matter, that Faith Hill doesn't have a collarbone and Kelly Clarkson doesn't have a butt, well, perhaps readers are justified in feeling a little gun-shy. And, for another thing, the way that individuals use retouching isn't always merely in service of looking as hot as possible. It's often just about making the picture itself interesting – griming it up for a vintage effect, going crazy with the exposure. It's a different kind of retouching, one that doesn't begin and end with creating a fake set of abs on the cover of Ab Monthly.

Regardless, Glamour is clearly ready to heed the words of its readers. It's not just altruism at play here: too many public embarrassments when the unaltered versions of overly enthusiastic photo spreads appear and your credibility is shot to hell. Yet it's also an acknowledgment that, as Glamour puts it, "retouching has its limits — or should — and Glamour plans to take a stronger role in setting ours." What's at stake isn't the softening of expression lines or removal of sleep-deprivation dark circles – those things will go on. But a too perfect image loses not just its humanity; it loses what sites like Flickr have based their whole appeal on: interestingness. "You told us you don’t want little things like freckles and scars removed," Cindi Leive wrote, adding, "And while our policy has always been not to alter a woman's body shape, we'll also be asking photographers we hire not to manipulate body size in the photos we commission, even if a celebrity or model requests a digital diet." Beautiful girls in beautiful photos still sell magazines – and by extension, lipstick and jeans and all the aspirational dreams associated with them. But a pledge to go a little easier on the alterations suggests the possible beginning of fashion's unlikeliest trend ever. A dash of authenticity.