When Harry met Sally -- and ruined the rom-com

The movie set the lame template for Hollywood\'s romantic comedies. As \"Friends With Kids\" proves, it still does 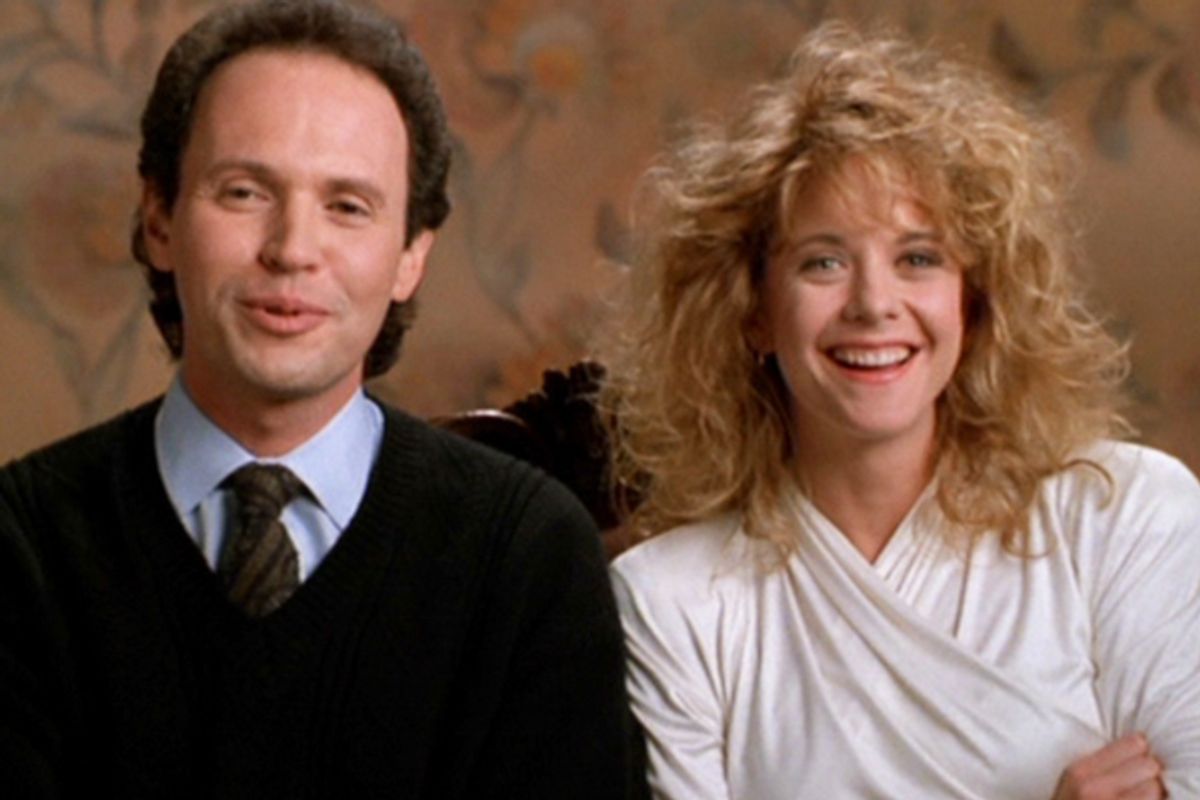 Billy Crystal and Meg Ryan in "When Harry Met Sally..."
--

As my closest female friend likes to muse when contemplating the marketplace for books and movies and other forms of entertainment, nobody ever went broke trying to convince heterosexual women that men will fall in love with them and stay faithful forever, despite all the evidence to the contrary. Is pure biological imperative enough to explain the persistence of the most formulaic kind of romantic comedy, even in the age of widespread divorce and destigmatized single-parenting and same-sex marriage? I'd hate to think so, and in fact I don't think so. But something must explain it. A desire for old-fashioned comfort in chaotic times? You tell me.

"Friends With Kids," an enjoyable new indie comedy that marks the directing debut of writer and actress Jennifer Westfeldt (best known for "Kissing Jessica Stein" in 2001 and her recurring role on TV's "Notes From the Underbelly"), has a lot going for it. But its excellent collective craftsmanship, its rampant dirty talk and its gloss of contemporary metropolitan morality only convey the appearance of novelty and flexibility, while in fact the underlying formula is as rigid as the sonnet. Like almost every rom-com of this epoch -- and I'm including some more adventurous films that don't at first look like rom-coms, including "Bridesmaids" and "Crazy, Stupid, Love." -- "Friends With Kids" is enslaved to a template established two decades ago by screenwriter Nora Ephron, first in "When Harry Met Sally ..." and then in "Sleepless in Seattle" and "You've Got Mail."

I'll get back to that, but let's give Westfeldt her due for making this completely hidebound, moralistic and sentimental yarn feel somewhat fresh and contemporary. She writes snappy, risqué and often flat-out filthy dialogue, and her portrayal of married life and parenting among New Yorkers on the edge of middle age feels far more convincing and authentic than would be typical in a Hollywood product. (Several scenes in the film were shot in the Brooklyn neighborhood where I live, as it happens.) She has a terrific ensemble cast, many of whom worked together in "Bridesmaids" and are starting to look like a roving comic rep company: Adam Scott, Jon Hamm (who is Westfeldt's husband and co-producer), Kristen Wiig, Maya Rudolph, Chris O'Dowd, Megan Fox, Edward Burns.

Westfeldt herself is an edgy, brittle performer; she's interesting-looking rather than beautiful, intense rather than charismatic. That too is an admirable tweak, and pairing herself with Adam Scott -- himself a longtime character actor who has rarely or never played the romantic leading man -- proves ingenious. Westfeldt's Julie and Scott's Jason are supposed to be college buddies and confidantes, surrounded by a coterie of coupled friends, who are all moving from Manhattan to Brooklyn and popping out puppies. Chris O'Dowd and Maya Rudolph are the loud, rowdy, comic-relief couple, while Jon Hamm and Kristen Wiig play somewhat against type as the dark and serious couple out of a Bergman film whose passionate relationship goes rapidly south.

Jason is a player who pursues short-term, highly gymnastic relationships with younger women and refuses to settle down; Julie's a brooding romantic who got her heart broken by a jerk and can't find a decent guy. But both are afflicted by ticking biological clocks, and apparently by the itch to spend countless thousands on private-school tuition. So they tell their friends they've decided to have a baby together, and of course the general reaction is relief and delight: We always knew you guys would be great together! And then Jason and Julie explain that, no, they aren't together. They got drunk and did the deed, the old-fashioned way, but they're not going to live together or get married, and they're going to keep on dating smokin' showgirls they pick up in Central Park (Megan Fox) or hunky, well-endowed and immensely rich guys they meet while speed-dating (Edward Burns), as the case may be. They're going to be a never-married, or "pre-divorced" pair of amicable co-parents, and they'll figure out something to tell the kid later.

And then -- well, no, wait. Here's my question: Of course I subscribe to the International Film Critics Code, under the terms of which I should tell you nothing more about the plot of this movie. But do you have even the slightest particle of doubt about what's going to happen at the end of "Friends With Kids"? Or about the kinds of second-act and third-act reversals the two characters will go through, or about the scenes where one of them is alone in tears and another is alone and grim-faced on the rainy streets of Brooklyn, while whiny indie-pop plays on the soundtrack? (In a daring break from tradition, there actually isn't a running-to-the-airport scene in this movie.) I mean, I guess you do have a particle of doubt, and I did too, because while you're watching a movie it's just human nature to imagine the possibility that it could end up resembling real life. But in another, more analytical part of our minds we understand that the doubt is, in itself, the desired effect, and isn't to be taken seriously.

There are too many things going on here to tease them all out adequately, including Hollywood's long-term cluelessness when it comes to making movies aimed at female audiences, and the fact that it's only natural to want and expect a happy ending to a comedy. But the ubiquity, and tyranny, of the Sally-Sleepless-Mail model of romantic comedy is what interests me. Twenty-odd years after Meg Ryan's fake orgasm in Katz's Deli, the rules established by Ephron remain essentially the same. As distinct from classic romantic comedy, the two lovers don't have to be chaste; they can sleep with any number of other people, and even with each other, before reaching the final kiss. (Bi-curious exploration remains at the outer edges of rom-com possibility, but it wouldn't, strictly speaking, violate the rules.) Their banter is snappy, frank and laden with semi-forbidden gags about politics, religion and sex; if in Ephron's heyday a PG-13 rating was often sufficient, today date-night legitimacy requires a hard R.

I guess you can't really expect Hollywood's attempts to tart up the rom-com genre -- such as the four sex-pals movies released in the last two years: "Friends With Benefits," "No Strings Attached," "Going the Distance," "Love and Other Drugs" -- to vary the formula too much. But while those movies ranged from surprisingly good to mostly worthless, only one of them ("No Strings Attached," easily the dullest of the four) was a big hit, and that particular micro-genre has mercifully receded. What mystifies me, though, is that Jennifer Westfeldt is a genuine independent filmmaker, married to a rich and powerful actor who can pull strings and make things happen. She wrote this script herself without a studio telling her what to do, and whether out of fear or survival instinct or genuine affection for the strictures of the genre, wound up making a movie that essentially combines "When Harry Met Sally ..." with "The Switch," the summer 2010 flop in which Jason Bateman turkey-basters his gal-pal Jennifer Aniston without telling her. Indeed, I'd go so far as to say that while "Friends With Kids" is a better film around the edges, the central couple in "The Switch" is funnier, better acted and way more romantically plausible.

I never thought I'd be holding up the 2009 "(500) Days of Summer," with Joseph Gordon-Levitt and Zooey Deschanel, as some kind of cinema breakthrough. At the time, I thought it was charming and exceedingly slight. But, dudes and dudettes, how many other American-made rom-coms of the last decade have devised a happy ending that openly flouted the Ephron formula? (Yeah, I loved Greg Mottola's "Adventureland," which gets extra points for sweetness and for nailing its period and setting, but leaves the formula intact.) Is it worth noting that "(500) Days" earned back four times its modest production budget, while most of the other inflated Hollywood rom-coms I've mentioned made little or no profit?

Sure it is, sort of, but studios and producers learn lessons slowly, and only through the application of many millions of dollars. I bear "Friends With Kids" no ill will, by the way; by all means go see it. (In the likely-to-be-confused-on-Netflix category, it's worlds better than "Friends With Benefits," but not as good as "Friends With Money.") But it's not the answer to the question. Somebody's going to have to write a romantic comedy in which something totally unexpected happens in the third act, leaving the Ephron template in ruins -- and then turn it into an absolute, gonzo-palooza worldwide hit -- before the 21st-century rom-com is unshackled from Tom Hanks and Meg Ryan.