Pick of the week: The greatest French love story of all

Pick of the week: A gorgeous restoration brings new life to the magnificent romance "Children of Paradise" 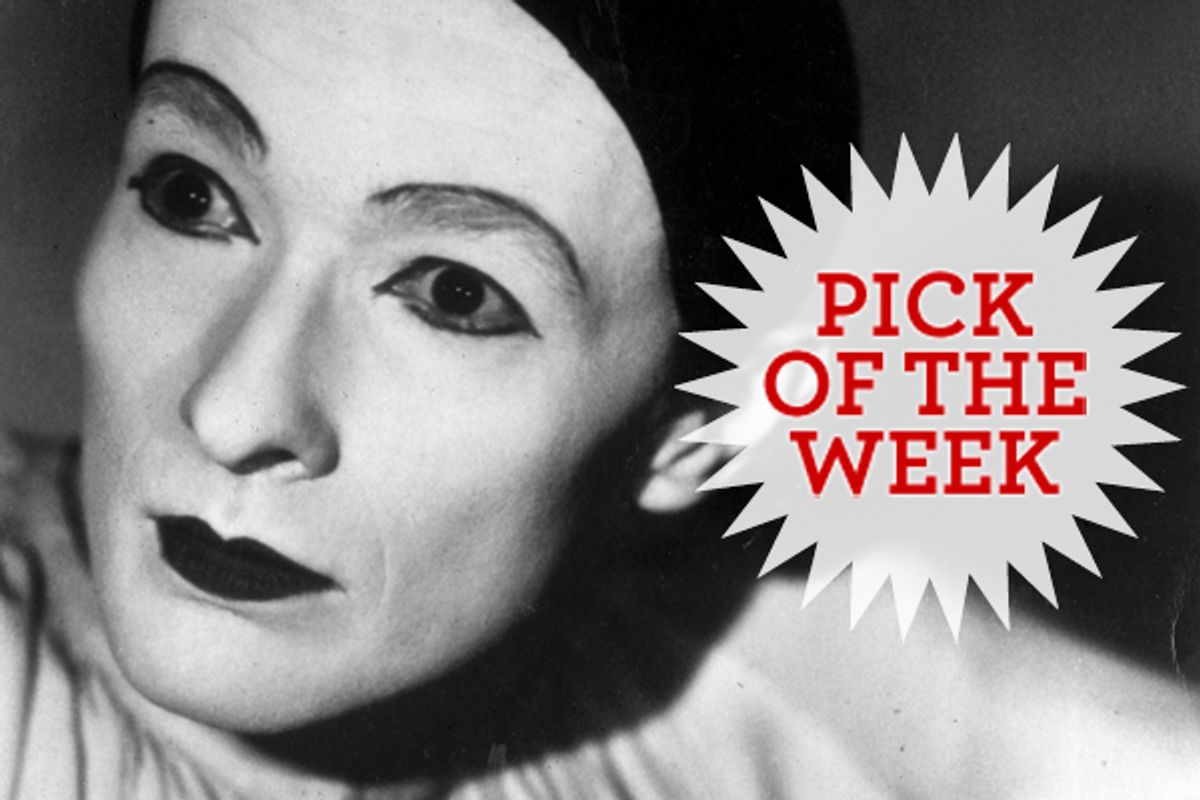 Until watching the magnificent new restoration of Marcel Carné's 1945 "Children of Paradise" a few days ago, I hadn't seen this legendary love story -- arguably the most famous and beloved film ever made in France -- in more than 20 years. I was a little apprehensive. "Children of Paradise" is a highly theatrical and conspicuously artificial production, a vibrant, teeming costume drama set on the "Boulevard of Crime" in early 19th-century Paris, and entirely shot on soundstages. It's exactly the kind of highfalutin, quasi-literary, star-centric, pseudo-Hollywood picture (often called the tradition de qualité) that Jean-Luc Godard, François Truffaut and the rest of the French New Wave would so forcefully reject, 15 or 20 years later.

Made during World War II in defiance of the collaborationist Vichy regime's restrictions, and premiered in Paris a few months after the Liberation, "Children of Paradise" came to be seen as a symbol of the unquenchable and distinctive quality of French culture. Although a tale of backstage skulduggery, debauchery and romance in the Parisian theatrical world circa 1830 would seem to have nothing to do with the realities of life under Nazi occupation -- which was why Carné could make the film in the first place -- "Children of Paradise" is full of coded meanings. Early in the movie, Garance, the cynical and mysterious femme fatale at the center of the story, played by French superstar Arletty, is arrested on suspicion of stealing a rich man's watch. She's released, thanks to the hilarious nonverbal testimony of street mime Baptiste Deburau (Jean-Louis Barrault), who is fatefully smitten with her. (Needless to say, Garance is not entirely innocent, of the theft or of flirting with Baptiste or anything else you care to name.) When the policeman tells her she's free to go -- "Vous êtes libre" -- she tosses her head and replies, "J'adore la liberté." No French viewer, now or then, could possibly miss the significance.

There's no point denying that "Children of Paradise" -- the title refers to the cheapest, uppermost seats in a theater, known in that era as le paradis -- presents some challenges to contemporary viewers. It's in black-and-white, of course, and everything about the sets and costumes and compositions and occasionally forced backstage antics is redolent of a bygone era. Some people will simply find the whole package too off-putting, and that's not a moral failing. But if you're willing to give this landmark of cinema history a try (or if you've seen it before and remember it as scratchy, faded and ancient-looking, as all previously available prints and digital versions have been) then you simply can't miss this gorgeous new restoration from the French studio Pathé. Laboriously scanned and remastered from the badly damaged original camera negative and other early sources using a high-resolution 4K digital process, this "Children of Paradise" has a level of brilliance, tonality and detail -- and as a result, an intimacy and humanity -- that was never previously possible.

As a result, if you give this movie time to work on you, the elements that seem overly artificial or impossibly distant from our own time fade into insignificance, and you're left with a complicated and wonderful romantic drama that's full of surprises. I'll be honest and say that after 20 minutes I felt a little fidgety -- but then the time flew past, and I was utterly lost. When the movie ended, nearly three hours later, I was startled. I'd happily have watched it again the next day. "Children of Paradise" is like a Balzac novel rendered into cinema, full of dramatic transformations and unexpected revelations: Rivals in love see their rivalry play out onstage, and then become the rival stage stars of their age, while remaining affectionate friends; the lovable hero is revealed as a dreamer and coward, the vain philanderer as a man capable of nobility and self-sacrifice, and the criminal villain as a figure of cruel but indisputable integrity. But Jacques Prévert's screenplay has no literary source -- he based it upon extensive research, and most of the characters are historical -- and "Children of Paradise" is a work of cinema first and foremost, magnificently photographed by Roger Hubert and delivering at least three or four of the greatest acting performances in French film history.

Garance, played by Arletty with a sort of vulpine, ferocious intelligence, is not so much a great beauty or great lover or great actress as she is a survivor. "Children of Paradise" is arguably not really Garance's story, although she's the spoke at the center of the wheel, but the story of four men who love her but for different reasons cannot have her. Prévert's dialogue doesn't give her much chance to express her biography or inner life, but Arletty makes the most of it. When Garance tells Baptiste that she grew up in hardscrabble Ménilmontant -- a working-class neighborhood identified with rowdy nightlife and left-wing politics -- and that her mother died when she was young, he murmurs sympathetically, "So you were all alone." She gives him a long look that seems to be equal parts pity, contempt and yearning and remarks that 15-year-old girls in places like that don't remain alone for long.

That scene, in fact, sums up the "poetic realism" of Carné and Prévert's approach in a nutshell. Baptiste is an innocent, a tremendous talent weighed down by ideals. He believes in true love, and so in his own way does aspiring Shakespearean Frédérick Lemaître (Pierre Brasseur), a vain and ambitious serial seducer who steals Garance away from Baptiste when offered the tiniest opening. Around this central triangle hover two seemingly ruthless men: the quasi-anarchist writer and criminal Lacenaire (Marcel Herrand), who professes to believe in nothing and no one, and the Count de Montray (Louis Salou), who believes only in money, power and aristocratic honor. But they are evidently in thrall to Garance as well -- and despite everything life has taught her about the uselessness and impracticability of love, she of course ultimately can't help falling hard for one of the four men (the one she can't have).

As the undoubted apex of French studio filmmaking before it collapsed in the postwar years, "Children of Paradise" represents a road not taken for big-budget movies. (It occurs to me as I write that the closest American cognate, on various levels, is "Gone With the Wind." Take it away, film scholars!) It violates contemporary Hollywood norms not just through its old-fashioned affect, but also because it's a grand entertainment aimed at adult sensibilities that strives for both emotional sweep and complicated moral intelligence. None of the characters is quite what he or she seems to be on the surface; if you find the performances of Brasseur and Herrand overly mannered, for instance, it's because they're playing egotistical but uncertain young men who are putting on airs and puffing themselves up. Barrault is far more appealing as the tender-hearted and large-spirited Baptiste, but that too is deceptive; as we learn in the harrowing final scene, Baptiste's romantic idealism conceals a level of cruelty and selfishness that makes the lecherous Frédérick and the murderous Lacenaire look like models of chivalry.

It's patently unfair to compare a great work of novelistic, dramatic and cinematic craft like "Children of Paradise" to the hidebound American romantic comedy of the 21st century, which remains locked into a formula that has changed only superficially in 80 years. It's a little like complaining that "Bridget Jones's Diary" isn't "Anna Karenina." Still, in the Paris of 1945 "Children of Paradise" was an enormous popular hit -- it didn't gain its critical reputation as a masterpiece until later -- which suggests that you don't always have to spoon-feed audiences the nebulous, happy-ever-after version of romantic love for them to love the movie. Maybe the film's success was a product of the moment; like Garance riding away down the Boulevard of Crime, Parisians had had their hearts broken and survived. But this movie is both a delicious entertainment on a grand scale and a subtle essay in the most painful and noble aspects of human nature, and its operatic tale of drama and heartbreak can sweep you away now as much as ever.

The newly restored version of "Children of Paradise" opens this week at Film Forum in New York, and also plays March 10 only at the Castro Theatre in San Francisco. Dates in Chicago, Los Angeles, Seattle and elsewhere will follow, with home-video release to be announced.