The trial of Mike Daisey 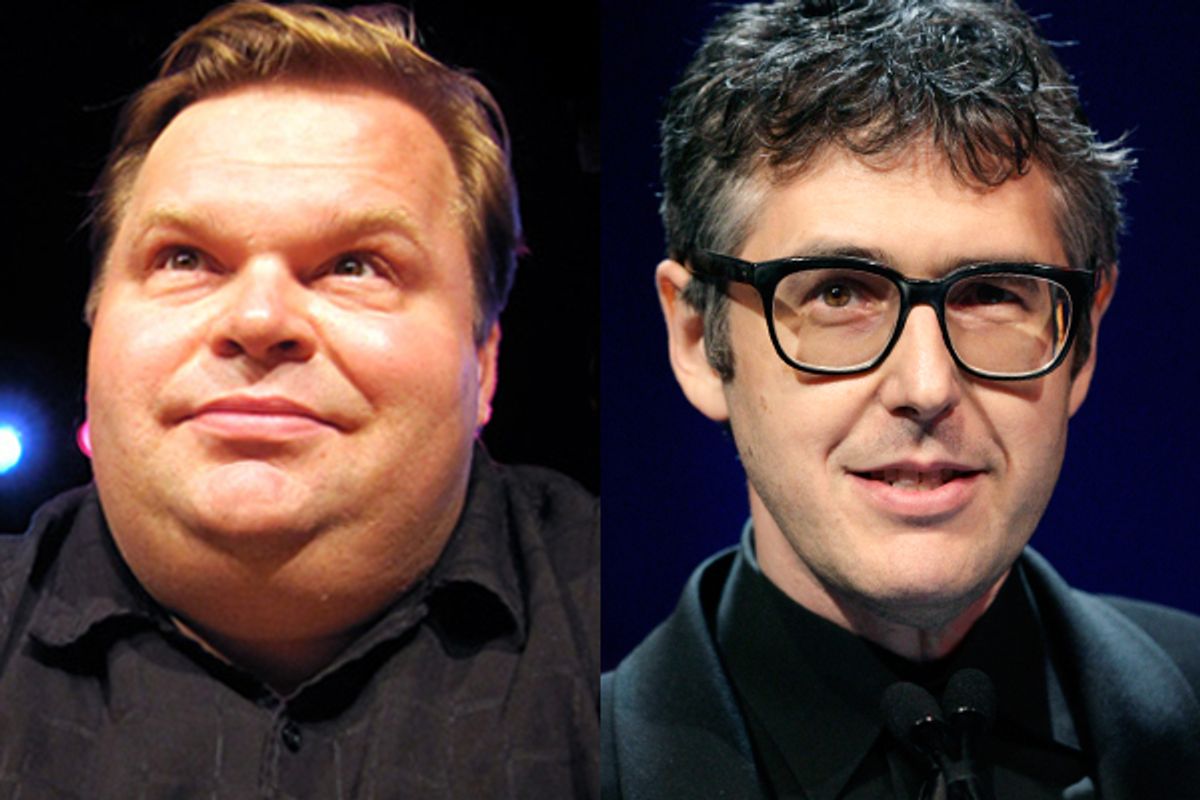 Laura Miller: The retraction by the radio program "This American Life" of an episode based on Mike Daisey's stage show, "The Agony and the Ecstasy of Steve Jobs," raises (once more) the question of how much fiction we're getting in our nonfiction. "This American Life" found that several incidents and facts in Daisey's account of his firsthand investigation of working conditions in the Chinese factories where Apple devices are made were fabricated or otherwise inaccurate.

Daisey responded on his own blog that, as "a theatrical piece," his one-man show "uses a combination of fact, memoir, and dramatic license to tell its story, and I believe it does so with integrity." His mistake, he concludes, was allowing excerpts from the show to be excerpted on "This American Life," which is "essentially a journalistic -­- not a theatrical ­-- enterprise, and as such it operates under a different set of rules and expectations."

I know the required response here is to jump all over Daisey for taking such liberties with the truth, but I have to say, I more or less agree with him -- except for one crucial point. Personally, I wouldn't be angered to learn that portions of any staged monologue, be it Daisey's or Spaulding Grey's "Swimming to Cambodia," had been reshaped for dramatic effect -- in fact, I'd be surprised if they weren't. Drama does not present itself as documentary.

This is a matter of framing, rather than absolutes. "This American Life" is not drama. It's not exactly reportage, either, and I expect some of the memoir-like segments the show airs also constitute "reshaped" events and facts. Nevertheless, the program presented "Mr. Daisey and the Apple Factory" as something very much like journalism, evidenced by their decision to fact-check it.

That Daisey obfuscated during the fact-checking process indicates that he was acting in bad faith, not just making a mistake. People don't cover up what they've done unless they suspect they've done something wrong.

So, I'd say: "The Agony and the Ecstasy of Steve Jobs" is OK, but "Mr. Daisey Goes to the Apple Factory" is not. What do you guys think?

But you don't get to enjoy your glory as the crusading avenger who blew the lid off Apple when you are making stuff up. And you certainly don't hem and haw about the facts of your account of events when "This American Life" comes a-knockin', go ahead and pass off your tale as true, and then blather about how what you're doing is about "human connection."

The fact that a lot of the response to Daisey's exposure has been so blase reminds me of the response I got when I wrote about James Frey last year. Oh hey, what's the big deal? It's entertainment! OK, well, Rush Limbaugh's an "entertainer" too, and he spent three days of airtime making things up about Sandra Fluke and birth control. And most of us think that was pretty uncool.

When you're speaking about real people and events, you have a responsibility to be clear how far into fantasy you're going. You can do that and still create interesting work -- nobody believes Neil Patrick Harris, actor, is Neil Patrick Harris, character in the Harold & Kumar movies. But what Daisey did was wildly, knowingly disingenuous, grandly self-serving, and all around gross.

Andrew O'Hehir: Mike Daisey definitely crossed a line from acceptable storytelling into unacceptable misstatements of fact, but Ira Glass was correct in saying that "This American Life" has to take much of the blame for it. As Laura points out, that show has an ambiguous status, and I had not known until now that its producers consider their work as journalism. That's not quite an adequate label, frankly. But it's clear that once they decided to fact-check Daisey's work for their radio show, and he actively misled them about the fact that some details were fictionalized, the Rubicon had been crossed.

To be clear, I have no problem with an artist or writer taking liberties with a somewhat true story in order to make a dramatic point or a social argument. That describes almost everything Dickens ever wrote, and everything else from Frank Norris and Theodore Dreiser to "All the President's Men," "Silkwood" and "The Hurt Locker." The larger problem is that our society lacks basic standards of literacy that would allow people to understand the distinction between fiction and journalism, and the varying pathways to truth (and definitions thereof) that each can offer.

We're obsessed with the question of whether things are "real," which betrays our doubts about whether anything we encounter in the media should be considered real. So the appearance of authenticity becomes a valuable commodity, and people seek it out when they don't deserve it. Every other Hollywood movie professes to be "based on a true story," which often is just an excuse for shoddy storytelling. What's doubly or trebly unfortunate about this case is that most of what Mike Daisey says about working conditions in Chinese factories is apparently true. He doesn't deserve comparison with someone like James Frey, who essentially tried to sell a novel as autobiography.

Daisey streamlined some details and fictionalized an important episode. It was totally OK to do that onstage, and totally not OK to do it in the context of a radio news program. The two contexts have radically different standards, and however he managed to seduce himself into forgetting that, he has now tainted his entire career with the flavor of bogosity.

Mary Elizabeth Williams: I think Scott Rosenberg summed it up well in Grist -- "So there’s no such thing as a neutral story. But there is such a thing as an honest story." When Will Reiser wrote "50/50," people knew that he'd had spinal cancer, like his character. The film cast his real friend Seth Rogen. But he's always maintained that the work and characters are fiction. See what he did there? That's how you base something on a true story -- you use elements of your experience without pretending it's journalism.

When Jack Donaghy jokes on "30 Rock" that he had a one-night stand with Nikki Finke, everybody knows it's a joke -- one that employs a real person. What Daisey did was to say, unvarnished, I was there and this happened. He did it in service of some self-proclaimed greater good. But in the end, he wound up blatantly misleading his producers at "TAL" and his listeners. He reminds me of "Nick Smith" in "Metropolitan," hiding behind the excuse that his story was a "composite" that could have happened. Could have isn't did. Happened to someone else isn't happened to you.

Andrew O'Hehir: You know, there's more to be said about the NYT's Daisey pile-on than I can say succinctly here, but it's noteworthy that the newspaper of record has unleashed two attacks on him, with David Carr writing that "the heroic narrative of a fearless theater artist taking on the biggest company in the world is now a pile of smoking rubble." Taking Apple's side against a guy who does theatrical monologues feels uncomfortably like the long Times tradition of speaking power to truth, if you follow me.

But I was struck by this passage in Charles Isherwood's piece: "The weight, authority, emotional power and — like it or not, theatricality — of 'The Agony and the Ecstasy of Steve Jobs' derive precisely from the assumption that Mr. Daisey is telling the truth about the events he describes."

He definitely has a point here. From the outset, Daisey enlisted himself in a semi-documentary tradition where the facts matter and poetic license is assumed to be minimal. That makes it a fair bit different from examples cited by me (Dickens, "The Hurt Locker") or Laura ("Swimming to Cambodia"), where a real situation is referenced, but we all understand that it's likely the specific details have been massaged for dramatic effect.

Mary Elizabeth Williams: Tell a story. Make it lively. Then tell the truth about what's real and what isn't. Doing a piece on harrowing work conditions in China is not the same as doing a piece on your stint as a Macy's elf.