Pick of the week: With its sex-obsessed young heroine, "Turn Me On, Dammit!" goes where few movies have gone 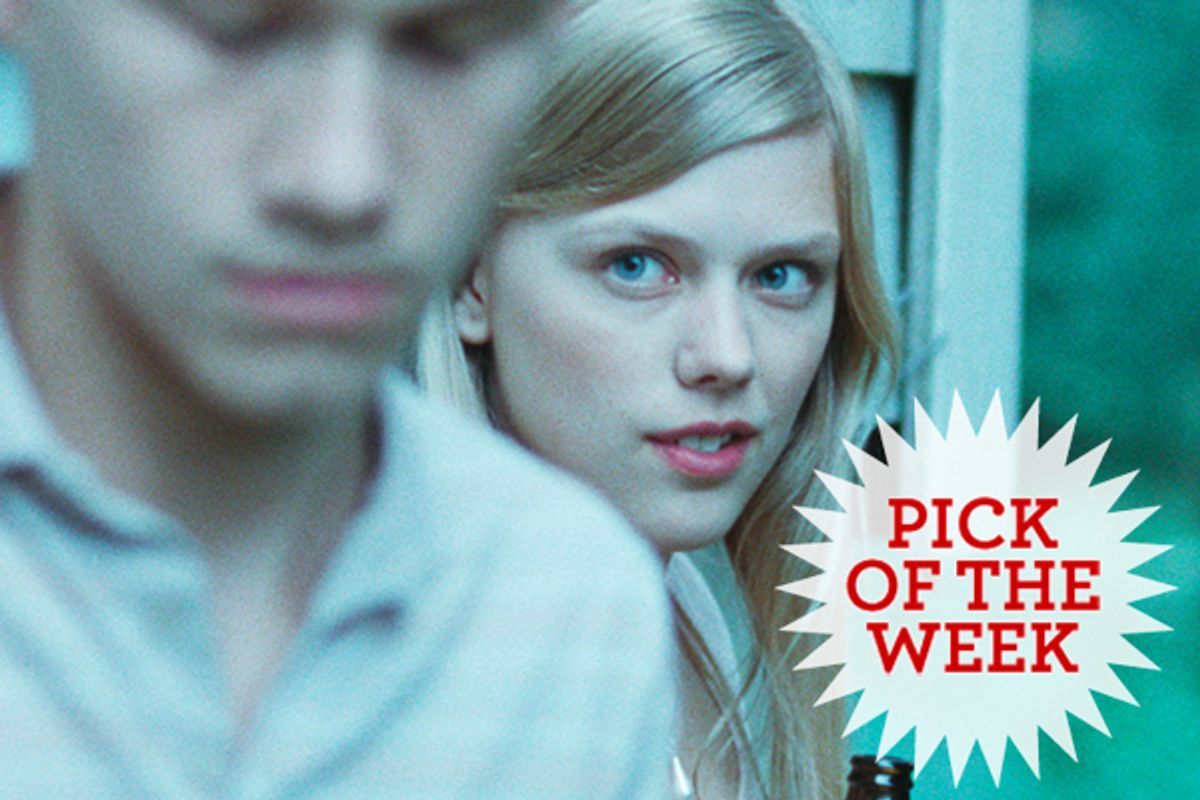 Matias Myren and Helene Bergsholm in "Turn Me On, Dammit!"
--

When we first meet Alma (Helene Bergsholm), the blond, almost angelic-looking teenage protagonist of the Norwegian comedy "Turn Me On, Dammit!," she's sprawled out on the kitchen floor of her mom's house with her hand down her pants, eagerly following the instructions of some phone-sex dude named Stig. You'll have to trust me that this is the setup for a memorably awkward sight gag and not a creepazoid NC-17 fantasy -- or, to put it another way, if Alma definitely has a dirty mind, the movie doesn't.

A dry, whimsical and finally sweet film that tries to turn the conventional teenage sex comedy inside out (at least in gender terms), this debut feature from writer-director Jannicke Systad Jacobsen is one of those rare movies that gets better and more complicated the more you think about it. Watching the film is a thoroughly charming experience on its own terms, and then you're left puzzling over all kinds of thorny questions that fail to yield clear answers. Is female sexual desire fundamentally different from male desire? If so, why is that true? Is a teenage girl's sexuality, as one female friend put it, mainly a question of "playing around with her newfound power over the desires of others, rather than an expression of her own desire"?

Indeed, teenage female sexual desire remains something close to a cultural taboo, and let's stipulate two things right now: The more I talk about this the more I run the risk of seeming like a perv, and I'm definitely not going to work out the whys and wherefores of that in a movie review. Perhaps teenage girls and young women are such central objects of sexual fascination in our culture -- in the form of both lustful fantasy and puritanical repression -- that it's difficult to conceptualize them as being subjects too. I kicked this around with a few colleagues, and we could only come up with a few examples of movies involving teen female horniness, all of them problematic in one way or another: Phoebe Cates and Jennifer Jason Leigh in "Fast Times at Ridgemont High," Laura Dern in "Smooth Talk," Katie Jarvis (opposite Michael Fassbender) in the disturbing but undeniably hot British indie "Fish Tank." "Dirty Dancing"? Sort of. "The Virgin Suicides"? Sort of. There's a lot of sublimated, metaphorical, kinda-sorta, which you just don't encounter in the endless numbers of movies about the endless horniness of teen boys.

At any rate, Jacobsen (a woman, in case you can't parse Scandinavian names) isn't interested in sublimated kinda-sorta. She drives cheerfully straight at the taboo, spinning an absurdist, imaginative coming-of-age yarn that would seem far more conventional if its hero were a teenage boy. Whether you see "Turn Me On, Dammit!" as a realistic tale of teen lust and confusion in the post-feminist welfare state, or as something more like satirical farce, is entirely up to you. Is it believable that a cute teenage girl would have to resort to phone sex to get off? Have there ever been phone-sex lines aimed at women in the first place? If you're going to get hung up on questions like that, this movie is not for you. The point is that Alma is stuck in the nowheresville fjord-side town of Skoddeheimen -- I think that's Norwegian for "Podunk" -- and she's desperately horny, and the boundaries between her sexual fantasies and the rest of the world aren't what they might be.

Alma has sporadic phone-sex-interruptus sessions with Stig (inflating her mother's phone bill to alarming dimensions) and elaborate nightly fantasies about a sleepy-eyed local dreamboat named Artur (Matias Myren), who seems to like her and all, but won't make a move. Almost everyone she encounters, from her dour boss at the village convenience store to her best friend's bitchy sister, can become the temporary star of Alma's (often hilarious) erotic imagination. Her partner in loathing for life in Skoddeheimen -- they flip off the village sign every time they pass it on the bus -- is her classmate Sara (Malin Bjørhovde), who writes meandering letters to Texas death-row inmates that we see as low-tech animations. (There is indeed an element of "Napoleon Dynamite"-goes-to-rural-Scandinavia quirkiness to this picture, but I never minded it.)

Things don’t improve any for Alma after she finally has an intimate moment with Artur, amid the ruined outdoor furniture behind the local youth center. Her would-be beau either does or does not display his throbbing naked manhood for her, which raises both the question of what actually happened (Alma says he did, but Artur denies it) but also of what Alma really wants, whether from him, from boys in general and from life. Since Alma is a known deviant and phone-sex addict, even her so-called friends don’t believe her, and she isn't entirely sure herself. That's when "Turn Me On, Dammit!," which is largely light in tone, swings back toward social realism. Like girls shamed for their real or imaginary sexual conduct all over the world, Alma becomes a social pariah and the subject of vicious bathroom graffiti. She runs away to the perceived bohemian freedom of the big city, forcing a somewhat predictable crisis in which Artur, Sara, Alma's eternally horrified mom (a difficult role, nicely handled by Henriette Steenstrup) and Alma herself are all forced to reexamine their actions.

When I first saw “Turn Me On, Dammit!” at last year's Tribeca Film Festival -- when the last word of the title was "Goddammit," with no exclamation mark -- it provoked a certain amount of debate, with some viewers suggesting that it might be too conventionally naughty to carry a feminist message. In fact, pervo-expectations will be thwarted, in that "Turn Me On" is all talk and no action. There's no sex or nudity at all, unless you count Artur's egregiously fake male member. It might merit an R rating (if it were rated), but just barely. This is a wry, affectionate small-town movie that ends up much closer to old-fashioned teen romance than you expect at first. But as I suggested earlier, along the way it sneaks up on a genuine feminist issue. Boys Alma’s age are expected to be sex-obsessed, but a girl who yearns for action is likely to find her lust and confusion simultaneously stigmatized, commodified and exploited. If Alma's story scores an extremely modest victory against repression and hypocrisy, it’s one that female libertines everywhere (and those who honor and support them) can embrace.

"Turn Me On, Dammit!" opens this week in New York and April 13 in Los Angeles, with a national rollout to follow.