Look at my scars

The remnants of my own illness have taught me that when it comes to difference, don't stare -- but don't turn away 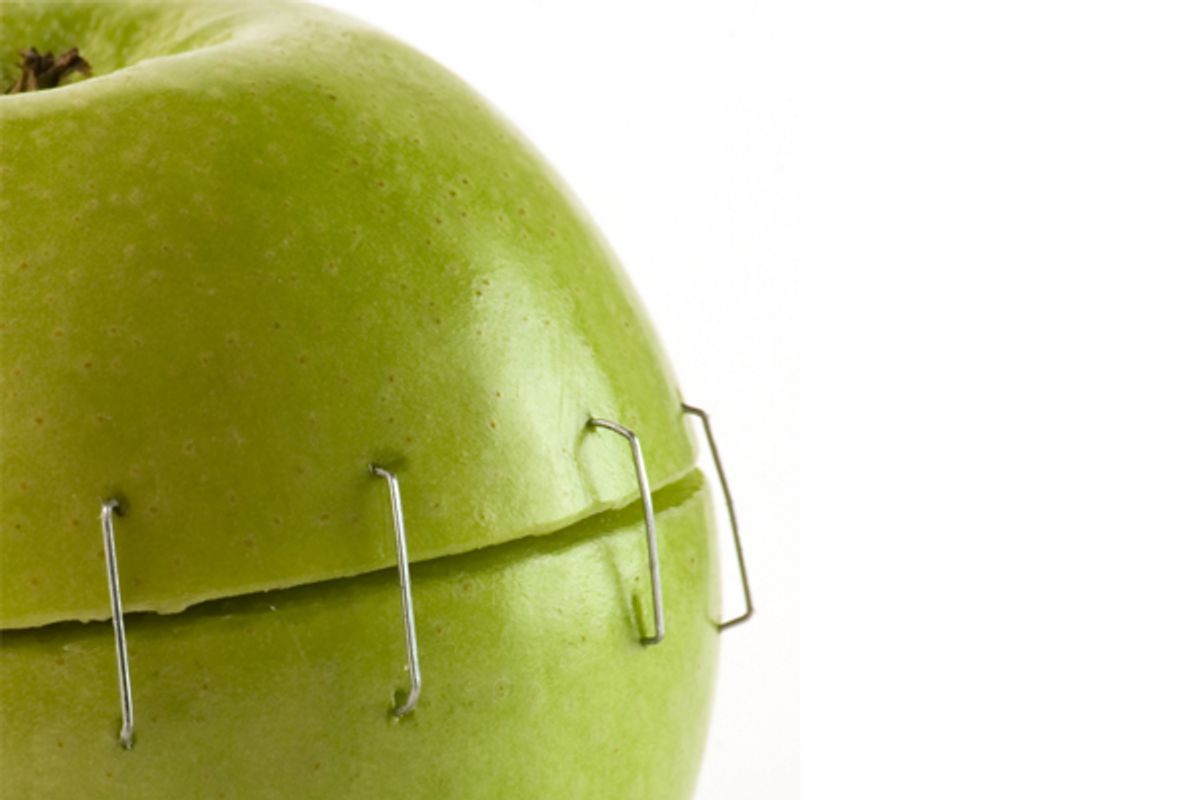 It was the kind of question adults rarely pose. But Abigail (a pseudonym, like some other names in this piece) is 8, and she doesn't have any qualms about being direct. The person she was asking, my daughter Beatrice, likewise didn't hesitate in her reply.

Abigail is new to our school this year. She is in every way a typical second-grader, except that she was born without a left hand. It's a trait that makes her undeniably noticeable, and so, sometimes, people ask questions. Sometimes Abigail has questions of her own. Sometimes, when you're different, you want to know.

When Bea told me what Abigail had inquired about a few weeks ago, I'd winced a little, wondering how my child had answered. Had she passed whatever test Abigail was giving? I know how frank Bea can be, how she walks behind me when we're out in public, checking whether the shiny, taut expanse of bare skin on my scalp is visible. "Mom, your bald spot," she'll say when we're in a restaurant, fussing with locks to try to hide the five-centimeter circle where, a year and a half ago, I had surgery to remove cancer.

I know that Abigail's question haunts many of us who are physically different, in ways both small and large, either by birth or circumstance. It plagues my friend with accident scars on his legs, who's already nervous about summertime and exposing his flesh at the beach this year. Maybe it's a small yet indelible birthmark on the chin. Or it's a big burn. Or a missing limb. Does this make you want to look, or want to look away? Do we make you uncomfortable? Do we freak you out?

"It's a thing that has to get explained," says Natalie, a New York executive who's had three serious melanoma surgeries and lives with ongoing psoriasis lesions. "For me, the anticipation of that is hard. I think people want to distance themselves from someone who's had a traumatic event. Somehow you wind up having to reassure them that you're not contagious, that they'll be OK."

Though she tries to be "very open about my illness, because I want people to get it," Natalie admits she has nevertheless "some really upset moments" of unasked for attention. "I once had someone literally cross the road to ask what was wrong with my legs," she says. "I was feeling really proud of myself for being brave enough to wear the skirt. And this woman came along and destroyed it." She adds, however, "I don't feel sorry for myself, and I don't wear this as a badge. I just want to be looked at as the successful, independent woman I am -- but I understand that some people can't do it."

It's true that some people can't, and there's loss in there. I used to have a friend who liked taking pictures of his buddies, including me – right up until my diagnosis and my relatively minor disfigurement. Then he never took another photograph of me again. I wonder if I freaked him out.

My friend Frank, a West Coast entrepreneur, understands. A few years ago, Frank had radical surgery for bladder cancer that left him with what he calls a "Guinness Book of World Records scar" that starts at his sternum, loops around, and ends at his pubic bone. He also has a partial hernia that leaves him, in his word, "lumpy" under a shirt.

"I get a lot of people staring. I'm used to it," he says. "It usually doesn't bother me. I'm just a little self-conscious when people are peeking out the corner of their eyes in the locker room." And, he recalls, "one time my wife and I were at Caesar's Palace lying out in the super-bright, crystal-clear Vegas sun, and this woman next to us asked, 'What happened to your stomach?' She was pretty horrified when I told her."

He's still sometimes horrified himself. "I look at myself every morning, and I think of all the horrible shit that I've been through because of this disease," he tells me. But when he looks in the mirror, he also sees a mark of survival. "I'm working out and riding my bike to train, and if that doesn't tell you how I'm doing, go ahead and ask me. I don't think I look that bizarre. I think I look like a guy who's had major abdominal surgery."

As Frank knows, when you've been through something life-altering, the first person you have to get to accept your look is yourself. "The first time I saw myself afterward, I thought, That looks very interesting," says Johan Otter. Johan is a master of understatement. Seven years ago, Johan was hiking with his daughter in Glacier National Park when he was mauled by a grizzly bear. His scalp was torn off; his eye was clawed. He had to wear a halo brace for 12 weeks and go through multiple grafts and surgeries to recover. And then, he says, he had to learn to "push through" his first time out in public again.

"You get used to it," he says. Besides, he jokes, "I never have a bad hair day." Otter admits he can still be somewhat surprising to strangers. "Once at Costco this woman said, 'Oh my God, what happened to your head?'" he recalls. But though he admits, "I'm a vain person just like anybody else," Otter says that "I'm always extremely proud of my scars. When you go through something like this, people see you with your true self. You learn that what matters is what's inside."

It's not always easy in our perfection-driven culture -- where a weight gain of five pounds can be treated as a life crisis and toothpaste brands wage war on dingy teeth and a "puffy face" means you're no longer considered "pretty" -- to believe that within battle scars and what others would call abnormalities, there is a raging, painful exquisiteness. It's often hard to feel the sideways glances and puzzled stares. But it's harder still to be overlooked entirely, to feel like the remnants of the trials we've endured are the things that make others unable to look at us. We want to be looked at not with pity, not with fear, not with morbid curiosity. Simply with clear and open eyes.

So when Bea told me her friend Abigail wanted to know if she was freaking her out, I hoped Bea had answered honestly. More than that, I hoped she answered kindly. I hoped she didn't pretend she'd never noticed Abigail's missing hand, or changed the subject altogether. "What did you say?" I asked her nervously. "I told her no," she shrugged. "I said, 'Why would I be freaked? I love you.'" And then I exhaled.

I know life for Abigail – and Natalie and Johan and Frank and everybody else wounded or scarred or born different -- is more complicated than that. The things that make us stand out in the crowd define us in a million little ways. They can remind us of the most dramatic, heroic moments of our lives, and of every small indignity and cruelty that has happened since. But what Bea and Abigail got to in the span of one recess period was that life isn't about seeing past each other's imperfections. It's about being unafraid to look at them directly. Because that's where the love is -- in the cracks and the sufferings and the challenges. Life isn't flawless. But it can be very, very beautiful. That day at recess, Bea told me, she had kissed Abigail, right on the place where her arm stops at the wrist. And they played together until the bell rang, and it was time to go back to class.